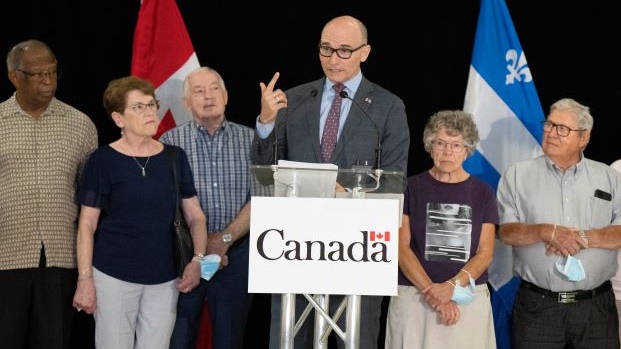 The federal government has signed an agreement with Quebec to provide $221 million in funding for long-term care homes in the province to address "gaps in infection control" and staffing issues highlighted by the COVID-19 pandemic.

Federal Health Minister Jean-Yves Duclos made the announcement about the Safe Long-Term Care Fund in Montreal-North Monday morning alongside the MP for Bourassa, Emmanuel Dubourg, and MP Patricia Lattanzio from Saint-Leonard-Saint-Michel.

"We've seen in this particular area of Montreal, and in my own riding, we've seen how damaging the pandemic has been to our seniors in long-term care homes and that was true before the pandemic as well," Duclos said. The funding will help with training for infection prevention control and for use of personal protective equipment, the minister said.

"This is not only for seniors to live safely, but also health-care workers as well."

While this marks a significant investment in Quebec, no one from the province was present for the announcement in Montreal.

When asked by the media, Duclos said he had invited Health Minister Christian Dubé, but he "does not control" his agenda, adding that he is in regular contact with the minister on a number of files.

Canada had set aside $1 billion in the fall economic statement back in 2020 to help the provinces and territories beef up their prevention control measures in long-term care homes. Ontario was granted $379 in SLTCF funding last April.

The health minister said "it took time for the good agreement" to be reached with Quebec for the investment.

The funding announcement comes one month after a scathing assessment from Quebec's coroner following an inquiry of long-term care homes in the early days of the pandemic. Coroner Géhane Kamel's described some of Quebec's CHSLDs as "deplorable" over how residents were treated and died in the first wave.

Through public hearings, it was revealed there were inadequate staff, poor infection control policies, families being banned from seeing their loved ones for several days amid the outbreak. Residents were also known to malnourished for days at a time in care homes that have been described as "war zones."

Actor Anne Heche has died after suffering a brain injury following a car crash last week, according to her family. She was 53.

Salman Rushdie, the author whose writing led to death threats from Iran in the 1980s, was attacked and apparently stabbed in the neck Friday by a man who rushed the stage as he was about to give a lecture in western New York.

300,000 Canadians at 'severe' or 'moderate' risk of gambling problems

While problem gambling affects a minority of the Canadian population, more than 300,000 are at “severe” or “moderate risk” for gambling-related problems, according to a Statistics Canada study of gambling behaviour.

A Quebec Superior Court judge has temporarily suspended two articles of the province's new language law, saying they could prevent some English-speaking organizations from accessing justice through the courts.

WHO plans to rename monkeypox over stigmatization concerns

The World Health Organization says it's holding an open forum to rename the disease monkeypox, after some critics raised concerns the name could be derogatory or have racist connotations.

A federal judge was to decide as soon as Friday whether to grant the Department of Justice's request to unseal the warrant that authorized the FBI to search former U.S. President Donald Trump's Florida estate. Attorney General Merrick Garland declared there was 'substantial public interest in this matter,' and Trump backed the warrant's 'immediate' release.