Head to the Dorval Technoparc west of the City of Montreal and you are likely to see two things: a rare bird that typically lives in Southern Texas and a whole lot of birders with binoculars and cameras with long lenses trying to catch a glimpse of it.

Birders have been streaming to the Technopark for the past two weeks to get a look at a juvenile Scissor-tailed Flycatcher that showed up far from its typical home on the Southern Great Plains.

"This bird just kind of showed up," said Sheldon Harvey of Bird Protection Quebec. "We don't know how these kinds of things happen. They just happen."

Harvey and his wife were among the birders who went to check out the pale grey bird with black, yellow and red highlights.

How long the bird will stick around may well depend on the weather.

"I don't know how much longer it could survive once the cold weather comes in because it is an insect eater," said Harvey. "We've been lucky that it's a little bit warm and hasn't really gone below freezing a lot."

A quick drop in temperature could be deadly to the bird. However, Harvey said they can travel long distances in a short period of time. 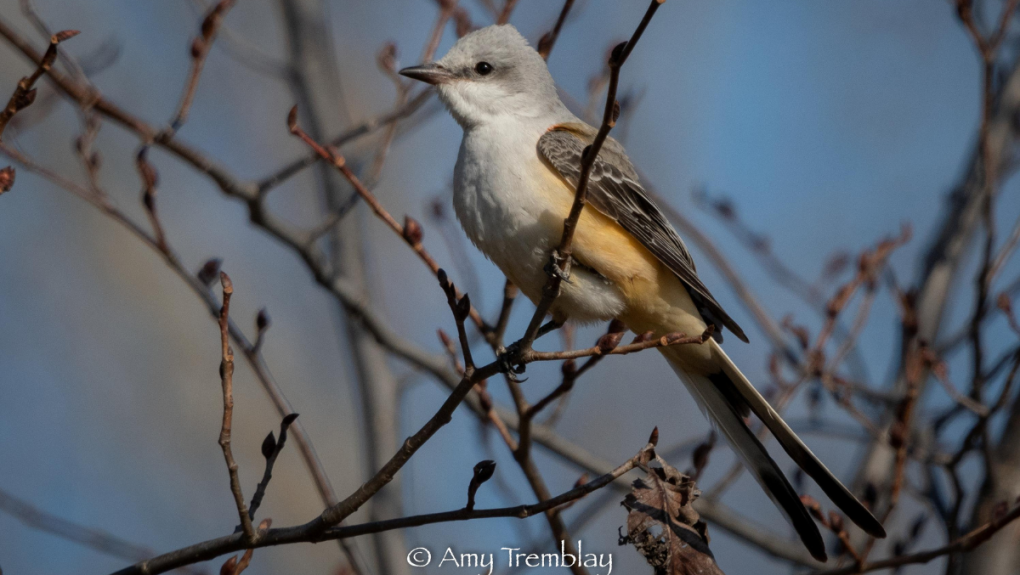 Photographer Amy Tremblay was eager to spot the Scissor-tailed Flycatcher at the Dorval Technoparc and got a shot of the bird rarely seen in the province. SOUCRE: Amy Tremblay

Photographer Amy Tremblay was eager to spot the Scissor-tailed Flycatcher at the Dorval Technoparc and got a shot of the bird rarely seen in the province. SOUCRE: Amy Tremblay

It is not the first time the bird has been spotted in the region.

The so-called Texas Bird of Paradise was first recorded in Quebec was in the late 1800s, and it has been a rare visitor to the province over the past 200 years.

"This is the 30th time that the bird has been reported in our area over more than 100 and so odd years," said Harvey. "It is a rare species for us, but there are at least 30 records of it having been reported."

The technoparc is a popular spot for birders, who regularly spot hawks, owls, geese, woodpeckers, nuthatches and many more species of birds. It is a 215-hectare site covering municipal, federal and private land. Katherine Collin of Technoparc Oiseaux said it's an "important migratory and feeding stopover for birds, with 211 species recorded in the area."

"This Scissor-tailed Flycatcher was blown off course and is not a bird we normally see at all in the province, but the fact that it ended up in the Technoparc wetlands and woods reminds us that the site is a crucial stopover for birds on the Island of Montreal, whether they're migrating or lost," she said. "We hope the site will be protected in the near future." 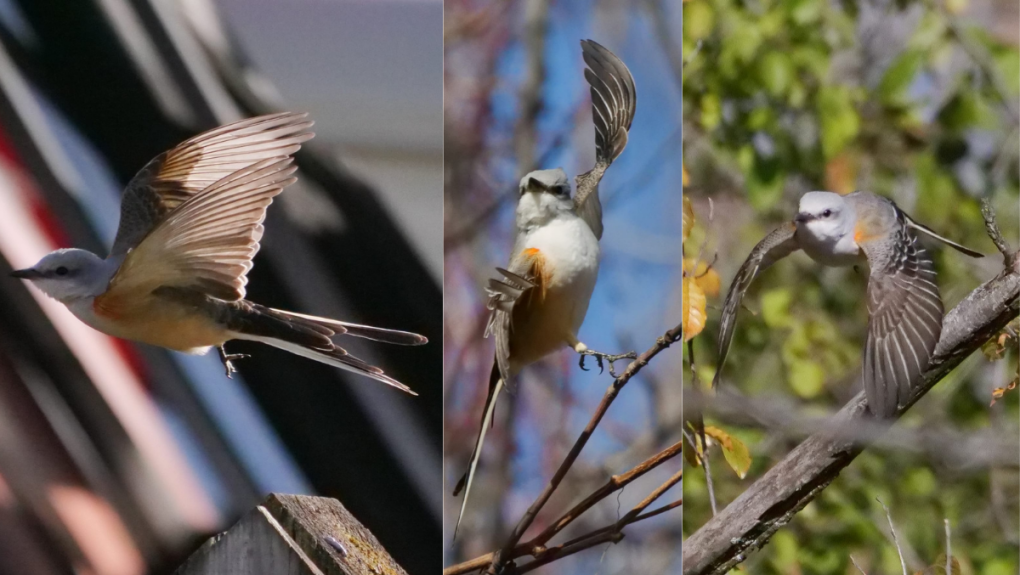 The Scissor-tailed Flycatcher calls Southern Texas and the Great Southern Plains its home typically, but somehow one of the birds wound up at the Dorval Technopark near the Montreal airport luring birders by the dozens to the area to catch a glimpse of him. SOURCE: Olivier Caquant.

The Scissor-tailed Flycatcher calls Southern Texas and the Great Southern Plains its home typically, but somehow one of the birds wound up at the Dorval Technopark near the Montreal airport luring birders by the dozens to the area to catch a glimpse of him. SOURCE: Olivier Caquant.

As birds don't typically speak any language birders understand, ornithologists and birders are left to speculate how the scissor-tailed flycatcher wound up near Montreal's main airport.

The bird could have arrived as a stowaway on an airplane, tagged along in another flock of birds or been blown off course by a storm.

Harvey said storms and other effects of climate change have resulted in birds being spotted very far from home.

"We know that in instances where there are severe storms or hurricanes, things like that, that often birds tend to show up in strange places, and people are always on the lookout for that sort of thing," said Harvey. "The other thing that we are seeing on a regular basis, and that's a product of climate change is birds' territorial ranges that are changing."

In Southern Quebec, Harvey noted, black vultures, fish crows and wild turkeys have become a common sight whereas birders would have to go south of the Adirondacks to see them in the past.

"The only reason that they would be moving north of their natural range would be shifting is that it's warming up," he said.

The change is happening much quicker than in the past.

"You talk about evolution of animals and stuff like that it doesn't normally happen in a very short period of time," said Harvey. "We're seeing this happen within the space of 5, 10, 15 years, which, on an evolutionary scale, is like a day. It's happening where a person in their lifetime is able to see it."