Farewell, Slovenia, say denizens of The Main -- but will you at least leave behind your sign? 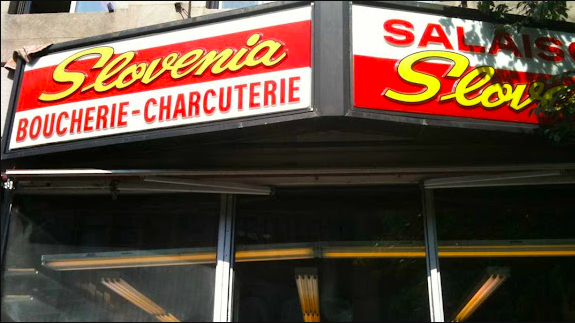 The sign above Boucherie Slovenia, a mainstay of St. Laurent Blvd. for 50 years (Facebook/Slovenia)

Thousands of Montrealers collectively sighed this month when they heard that yet another city mainstay seemed to be disappearing—Slovenia deli, whose bright red-and-yellow sign has decorated St. Laurent Blvd. for 50 years.

“This hurts my heart,” wrote one woman to the store’s owners when they announced on Facebook that this Saturday, Jan. 29, would be their last day of operation,

She recounted coming all the way to the shop on The Main from the Eastern Townships as a child, with her Croatian mother.

Loyal customers inundated the shop with memories and photos of trekking from as far away as the Gaspé to bring home its Eastern European-inspired meats, sauerkraut and other delicacies.

But for Montrealers living in the area, passing the store every day, it also meant something else—a visual link with the past.

“Nothing replaces these fantastic old shops, the umbilical cord between Montreal and the Old World,” wrote another woman.

Amid the nostalgia, one question was never completely answered: is the landmark going to be vanishing completely?

After all, in a first-in-Quebec move in fall 2020, the Plateau borough began protecting old commercial signs that it considered vital to the area’s heritage.

It came up with a list of signs that may not, under a new bylaw, be taken down, even if the property changes hands.

For many of the beloved signs, there isn’t much risk of that happening anyway, since the list includes many thriving businesses like Schwartz’s, the restaurant l’Express, and the competing Fairmount and St. Viateur bagel shops.

So did Slovenia’s colourful, old-timey sign make the cut? 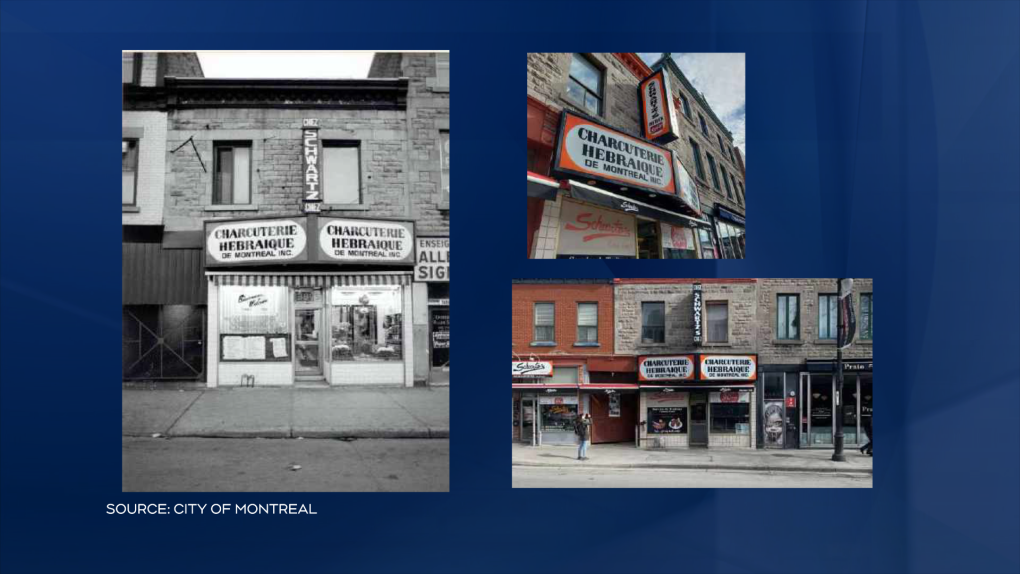 It easily made the long list, explained Julien Deschenes, a political aide for the borough who closely followed the long process to designate protected signs.

The flurry of activity began in 2019, as Montreal’s real-estate market began to heat up very quickly. That year, the historic sign for Archambault at the corner of St. Denis St. and Ste. Catherine St. was very quickly removed, before the city could weigh in.

In an emergency response, the City of Montreal had the Archambault sign put back. The neighbouring borough of the Plateau watched this play out and put a kind of ceasefire in place in its own territory while it convened a committee.

It quickly came up with a long list of important old signs. “We froze all modification for 70 panels,” Deschenes said.

Slovenia was on that list of 70, along with several delis along St. Laurent and many other businesses throughout Mile End and the Plateau.

Then the harder work began, as the group began chopping down the list. The committee included heritage groups and also the Quebec Association for the Sign Industry—“that's something I didn't know existed,” Deschenes said.

It wasn’t easy for the borough, said Deschenes, a born-and-bred local who loves Slovenia and knows all the old signs up for debate. But sentimentality isn’t the only factor, he said.

“We had to keep the balance between being too rigid for future owners who are being forced to take care of those signs… and future needs of the borough,” he said.

And the group wanted “the opportunity to have new heritage as well,” he added.

They didn’t want for Montrealers to “remain only witnesses to the past.”

In the end, Slovenia was cut from the list. Seventeen of the 70 were left standing.

“In those 17, there was the Schwartz sign—that was really importance for us to protect this one,” he said. Similar delis and butchers along the same stretch of St. Laurent lost out to their internationally famous cousin, which is now owned by Celine Dion.

“Deli shops from The Main, they were all concentrated in the Schwartz panel,” he said.

The list of 17 also includes some surprises: the vertical ‘TAVERNE’ sign, installed in 1945, for the bar Verres Stérilisés on Rachel St.

The sign from Jano portuguese chicken, dating from 1974, will be saved. And never fear, Plateau-dwellers, because the Cinema L’Amour sign is going nowhere—it made the list. 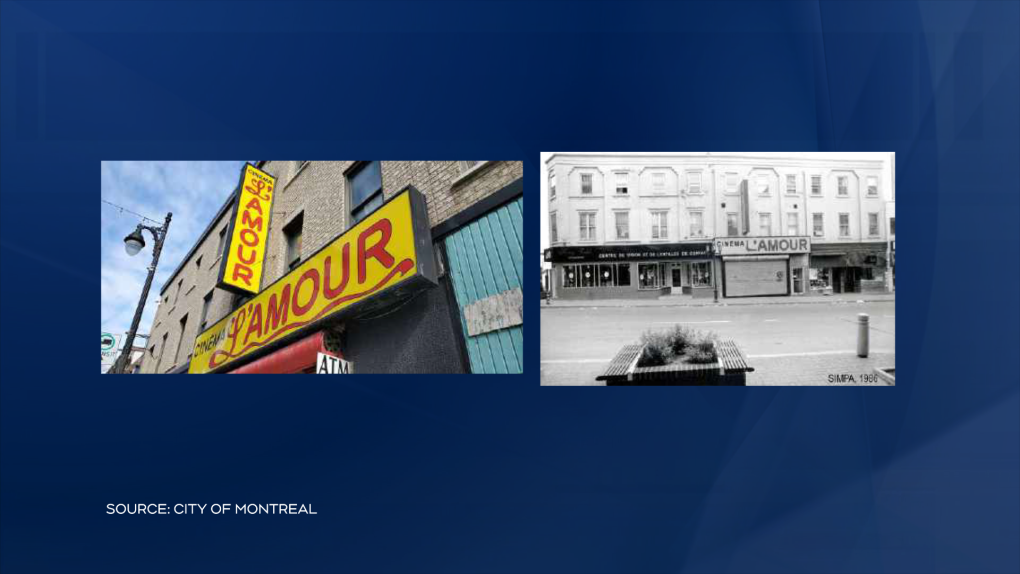 The full list of 17, including an explanation of their history and many photos, can be found here.

As for the remaining 53 that didn’t make the list, the borough let them know about a project out of Concordia University, the Montreal Signs Project, which has, since 2010, been taking custody of old local signs when businesses close and preserving them in a type of museum.

If you close, the business owners were told, consider not throwing out your signs and calling this number instead. The reaction was not “vivid,” said Deschenes, but at least they now have the information. 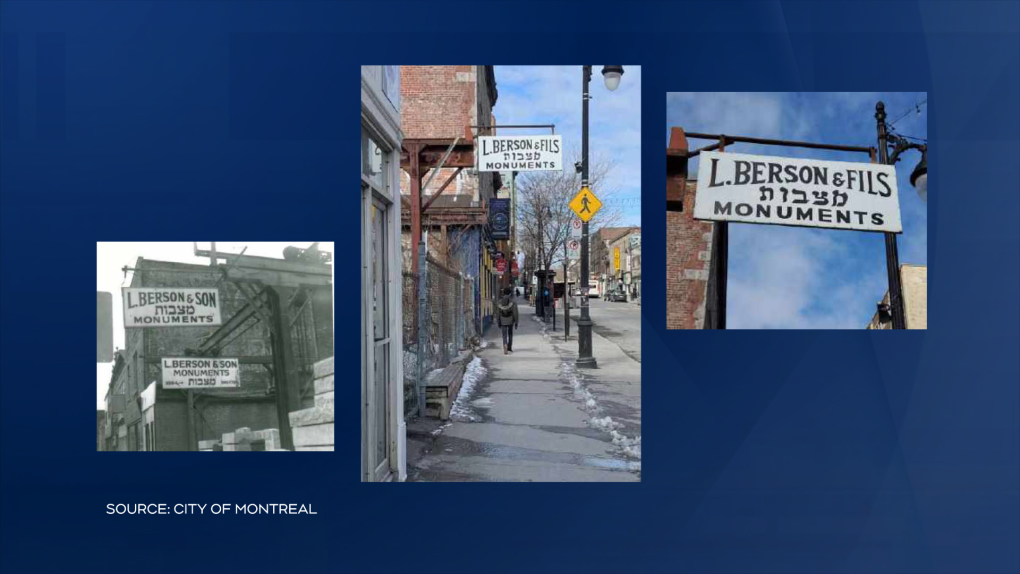 Some longtime business owners don’t like the idea of their signs remaining in place in perpetuity anyway, he pointed out. This came up with one of the 17 protected signs, though he didn’t say which one.

The owner “wasn't sure at first if he was interested in keeping his heritage after his business is done,” Deschenes said.

“Finally, in the end I think he agreed with the idea the sign could stay. But it raised concerns and questions about who's deciding, in the end?" he said.

"It's part of their ownership because they designed the sign, they've owned and lived their businesses for years. But in some cases it just ends for some reason and they might not want the business to still be present if it's not lively, or they might not want to be associated with the new shop.”

The owner of the Slovenia building could not be reached to ask about his plans for the building. Deschenes said he didn’t know if the deli owners had been in touch with the Concordia project about their sign.

But on Instagram, the Montreal Signs Project wrote that they had indeed called the store's owners. They won't be taking over the sign but were “delighted to report that they have plans to save their awesome sign” in some other way, they wrote.

Slovenia’s owners have declined most media interviews over the past two weeks. But on Friday, one of the store’s owners gave CTV News an answer.

The sign is going to “the children of the family,” he said, at the children’s request. Their older relatives have no idea what they plan to do with it, or why, he said.

The shop will be locked up for the last time at 5 p.m. on Saturday, but be warned, he said: if you come by tomorrow, there’s "not much choice left in the store."

For some people, that’s not the only reason to stop by. In the past two weeks, the store has also been busy with in-person visits of longtime clients saying goodbye, he said--people not just wanting to snap up the stock, but to look around for one last time.

Texas Gov. Greg Abbott says 15 people were killed in a shooting Tuesday at an elementary school. Abbott says the suspected shooter, an 18-year-old man, also died and was believed to be killed by responding officers.