Family hoping $20,000 reward entices someone to give information about missing dog 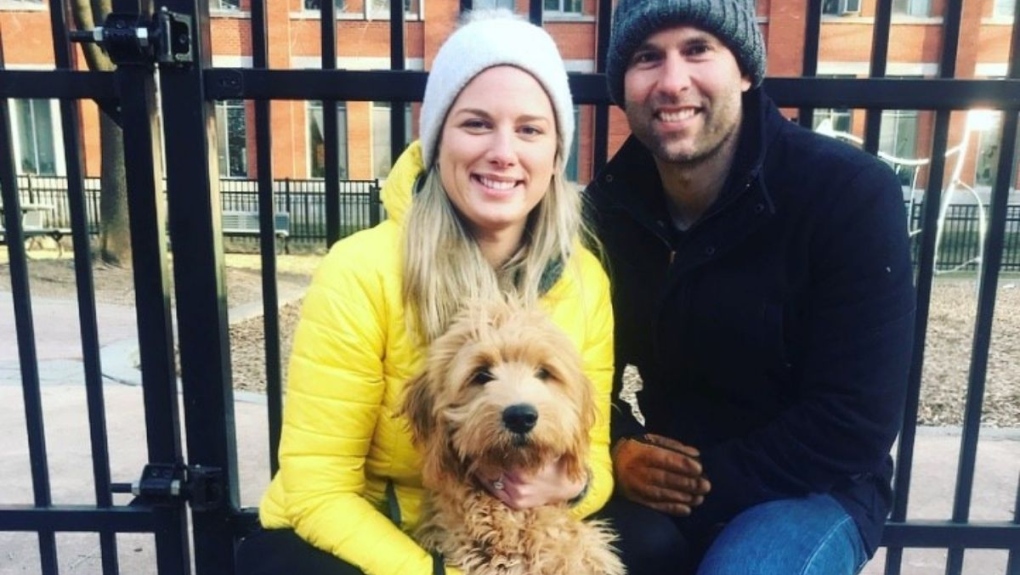 Chloe Rodgers and Stirling Martin are offering $20,000 to anyone who can help them find their puppy Marlowe, who they say was stolen. SOURCE: Stirling Martin

MONTREAL -- A family is hoping that by offering $20,000, someone will be urged to return their Goldendoodle puppy that went missing Jan. 2.

Stirling Martin and his wife Chloe Rodgers said they let their puppy Marlowe (now eight months old) outside at their Lac Superieur chalet, and she disappeared.

"We let her out, and within 10 minutes she had disappeared, and that was very unlike her," said Rodgers.

"We went searching because we're in a pretty remote area for her and came up empty so after that, we had drones go up and look, we went up in a helicopter to see if we could see anything, and we didn't."

The couple hired dog tracker Matthew King who sent his bloodhound Baxter out to try and find Marlowe.

Marlowe likely ended up on Duplessis Rd. on the north side of Mt. Tremblant, and the couple is pretty certain she was taken around 3 p.m. when skiers are getting off the slopes for the day.

"There's a lot of traffic and her scent disappeared right at the road, so we know she was picked up in a car," said Rodgers.

If she had been hit by a car, the bloodhound would have found her, Rodgers said, and the couple received no news when they contacted the municipality.

The couple is offering the cash reward no questions asked to dissuade anyone from purchasing the dog on Kijiji, or encouraging whoever may have picked her up to return Marlowe to the family.

The reward money started lower, but since learning about the scarcity and demand for dogs during the pandemic, and the rise in dog thefts, the couple upped the cash reward.

Martin said many people have contacted the family in support and suggested basically making the dog as famous as possible.

"That was our main driver with the reward," he said. "We understand that most people aren't helping us for the money. The other thing is, if the person that happened to find Marlowe did have malintentions in terms of they're taking her to sell her or something we were hoping to entice them to just give her back, it would be much easier for them."

Also, if a neighbour or friend knows Marlowe is being searched for and there is money involved, they can contact the couple.

"If you find a dog and you decide to keep it and not do the right thing, you are probably are going to tell someone right in your inner circle," said Martin. "That's where the other people have had success is that they actually got tips from people that like hey actually my neighbour's new dog looks like the dog you're looking for."

Even when they see a dog that looks like Marlowe on sale online, it is sold by the time anyone in the family calls.

"There's such a demand and they're sold so fast that even if there's a dog that we think may resemble Marlowe and we try and contact the person to see the dog, it's crazy there are hundreds of people that are in line to look at these dogs," said Rodgers. "It is pretty crazy. The dog situation right now."

Monteregie SPCA founder Linda Robertson said the demand for adoptions has skyrocketed during the pandemic.

On Kijiji, prices for some dogs are in the thousands of dollars. While Quebec provincial police said they have received no reports of stolen dogs thus far in 2021, there are at least five notices of stolen dogs on the website.

The dog was meant to help the family get through the COVID-19 isolation period.

"She's a part of our family and she belongs home," said Rodgers.