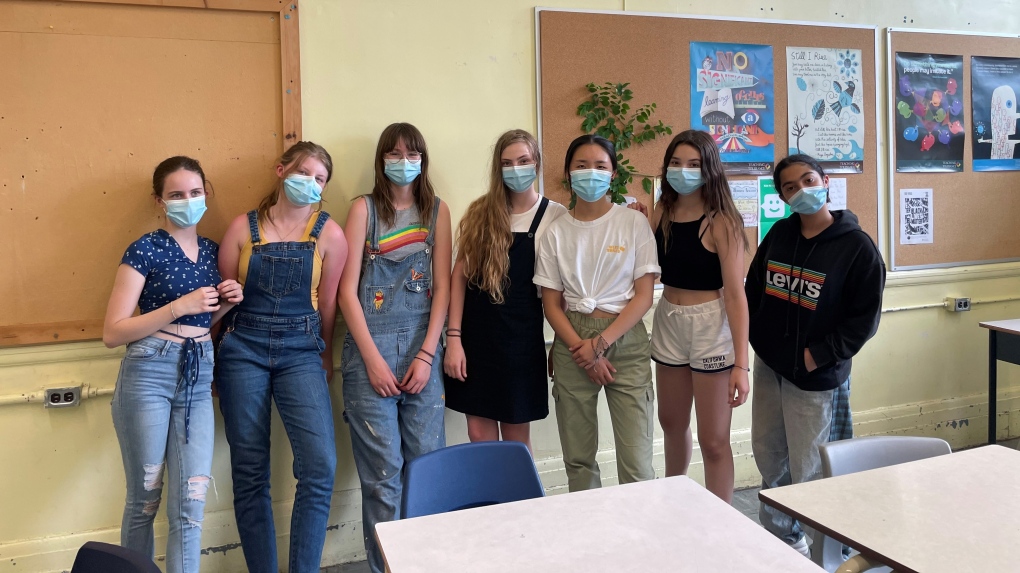 MONTREAL -- A group of young students at F.A.C.E. School in downtown Montreal have taken it on themselves to turn their school's dress code upside down.

The goal, they say, is not to have carte-blanche over what they can wear, but to encourage teachers and staff members to treat them with respect.

"At our school, [on the English side], if you're dress coded, they can do it however they want," explains Ivory Fleming, who is in Grade 7. "For example, a male teacher at our school pointed me out in the hallway and told me to stand in the middle of the hall until I buttoned my jacket."

The 13-year-old states such incidents make her, as a young woman, feel sexualized and uncomfortable.

"I've had a teacher say, 'nice belly' and point out my stomach as I walked in," Fleming told CTV News. "Friends of mine have been pulled out from the cafeteria... [We wanted] to change the way it was enforced, which we haven't done yet, but we're working on it."

Fleming, along with six of her friends, worked together to rewrite the school's dress code.

"We realized that there were a few things. The biggest one was that the dress code itself was too vague," said Ivory Fleming, who is in Grade 7. "People were getting dress coded constantly for things that other people were wearing."

She notes students were told not to wear anything too "form-fitting" or "low-cut," but what that actually meant was up to individual interpretation.

"Our main thing was that it was only being applied to people who were more female presenting," she points out. "So, we wanted to change it, which we have now done, to something that had more specific rules."

Fleming says the group searched for different dress codes online and pulled together bits and pieces they thought would make sense in their educational setting.

"Your front and sides have to be covered; you can't have vulgar, aggressive messages on the clothes; the clothes have to fit the activities you're doing," she lists. "The fabric has to be opaque when it's covering certain areas... We made it specific, a list of rules."

A post shared by Fight the dress code (@coded_change)

The new dress code will appear in the agenda for the school's English starting the next academic year.

"We do have a lot of people in our grade on the French side who have been helping us the whole time," Fleming notes. "We're hoping to get it changed for them next year too."

The teen, who has aspirations to run for student council, says the school was very receptive to the project.

Principal Marilyn Ramlakhan confirmed the English side of F.A.C.E is collaborating with the French sector to finalize details and bring the project to the school as a whole.

"The process is going extremely well," she added. "The process has been a great collaboration between students, parents and the administration."

The other students that spearheaded the project with Fleming are Gisele Brown, Delilah Sparling, Anneke Barr, Sihoo Byun, Daisy-Jo McKay and Mantra Amiri.