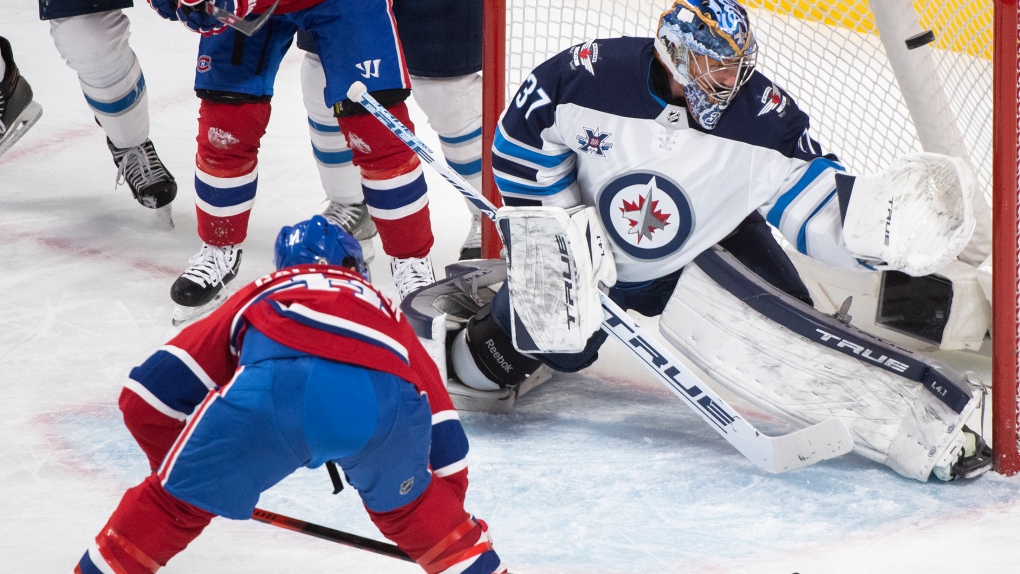 Montreal (11-6-6) was coming off a 4-3 overtime loss to Winnipeg and had won just one of its last seven -- a stretch that included three losses (two in overtime) to the Jets.

Winnipeg (15-8-1) had won two straight and six of its last seven. But that form was not on display Saturday.

With Winnipeg trailing 7-0, Mathieu Perreault finally beat Carey Price with a power-play goal at 11:14 of the third. Connor Hellebuyck was pulled in the second period after the Habs' fourth goal. He stopped 15 of 19 shots.

Returning after a three-game absence due to a lower-body injury. Anderson started on a line with Toffoli and Jesperi Kotkaniemi.

After a cagey start, the game began to open up and Hellebuyck stopped Jonathan Drouin on a breakaway with less than six minutes remaining after a stretch pass from Gallagher.

Anderson took advantage of a fortuitous bounce after Kotkaniemi, fighting for the puck in the Winnipeg end, fired the puck into the corner. Hellebuyck went behind the goal to corral the puck but it hit the entrance used by the ice cleaner and bounced back in front of goal. Anderson, Johnny-on-the-spot, knocked it into the empty net past defenceman Nathan Beaulieu at 15:29 for his 10th of the season.

The Canadiens broke the game open in the second period with four goals in nine minutes two seconds.

After Kotkaniemi won a faceoff in the Winnipeg end, Jets defenceman Tucker Poolman had a chance to clear but only sent the puck to the blue line. Shea Weber poked it back towards the slot where Toffoli's high wrist shot beat Hellebuyck for his 15th of the season at 7:03.

Failure to clear the puck cost Winnipeg again less than four minutes later with Gallagher knocking Phillip Danault's no-look cross-ice pass into a gaping net. Gallagher, left alone on Hellebuyck's doorstep, then made it 4-0 at 14:25 with his 10th of the season after the Habs hemmed the Jets in their own zone.

Laurent Brossoit took over in the Winnipeg goal and was promptly beaten by Armia's low wrist shot at 16:05 after a Montreal rush up the ice that drew hardly a challenge.

Byron made it 6-0 at 4:20 of the third, backhanding a fat rebound home after Brossoit failed to handle a long-distance shot from Jake Evans. Seconds earlier Jets forward Trevor Lewis was hit on the hand by a Nate Thompson shot.

Petry added to the Jets' pain at 8:20 with a wrist shot through traffic from the blue line.

Saturday's game was the fifth under interim Canadiens coach Dominique Ducharme, who is now 2-1-2 at the helm. Four of the games were against Winnipeg.

"You kind of get sick and tired of battling the same guys," Montreal defenceman Brett Kulak, speaking before the game, said of playing the same team for the fourth time in 10 days.

"We've played this team a lot right now. So yeah, there's a little bit of hatred for each other there, but I think it's good. And it brings the competitive level of the game up a little more," he added.

Montreal starts a six-game road trip Monday with the first of two straight in Vancouver. The Jets, on a five-game road trip, open a three-game series in Toronto on Tuesday.

This report by The Canadian Press was first published March 6, 2021