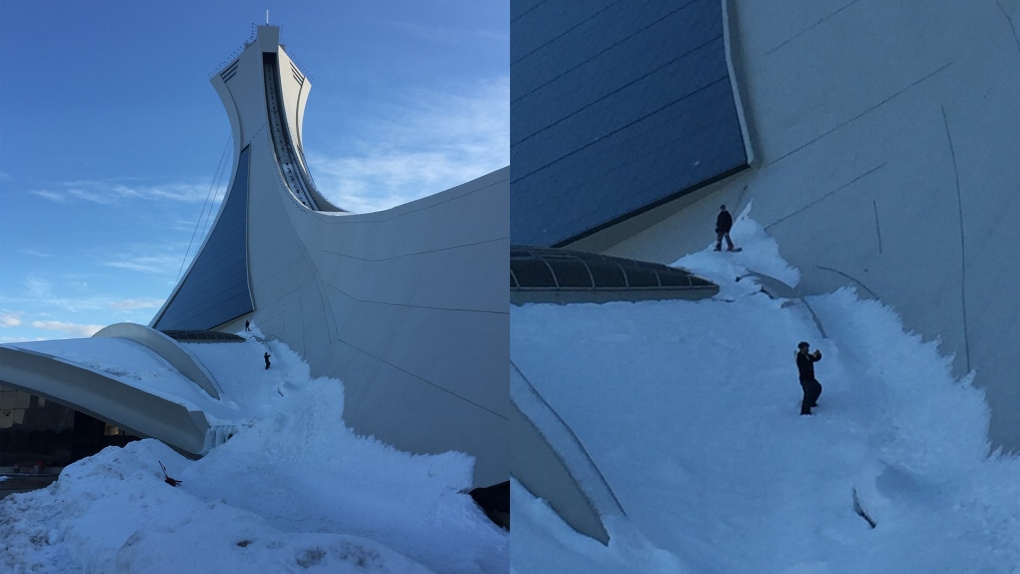 Two snowboarders captured on video snowboarding down the side of the Olympic stadium on Sunday, Feb. 28, 2021. (Photo courtesy: Paul Hugo Baptiste)

MONTREAL -- Even for a dense metropolis, winter sports have always been a part of Montreal’s long winters.

With Mount Royal, Parc Jarry and Jean Drapeau, no urban skier or snowboarder should feel like there aren’t enough places to get out and play.

But the abundance of other, safer options may not have occurred to Jérôme Arbour, who got some attention for illegally snowboarding on the Olympic stadium on Sunday.

A video of the event posted to social media garnered more than 34,000 views this week. In the clip, Arbour was one of two snowboarders carving down the side of the stadium.

Arbour says he was out with a friend that day, who pointed out to him that the snow had piled up near the entrance of the Olympic Stadium, high enough to slide down.

“You know, I can’t stress enough how dangerous this is,” said Cedric Cédric Essiminy, spokesperson for the Olympic Stadium.

“There are plenty of places when you can go and use your skateboard, your snowboard, your bicycle, whatever activity you're into, at the Olympic Park.”

He says the danger of falling and of causing damage to the building means the actions of the two men were “really, really, risky.”

Paul Hugo Baptiste was passing by when he spotted the boarders. He snapped the video that got the attention online.

“Every week there’s something crazy happening in this city,” he said.

Baptiste became one of the 20 people who stopped to watch.

He says that he was aware that what he was doing was illegal, but despite claiming the act online, he hasn’t heard from police.