Epidemiologist: Should elementary schoolchildren return to school on Jan. 4? The short answer is no 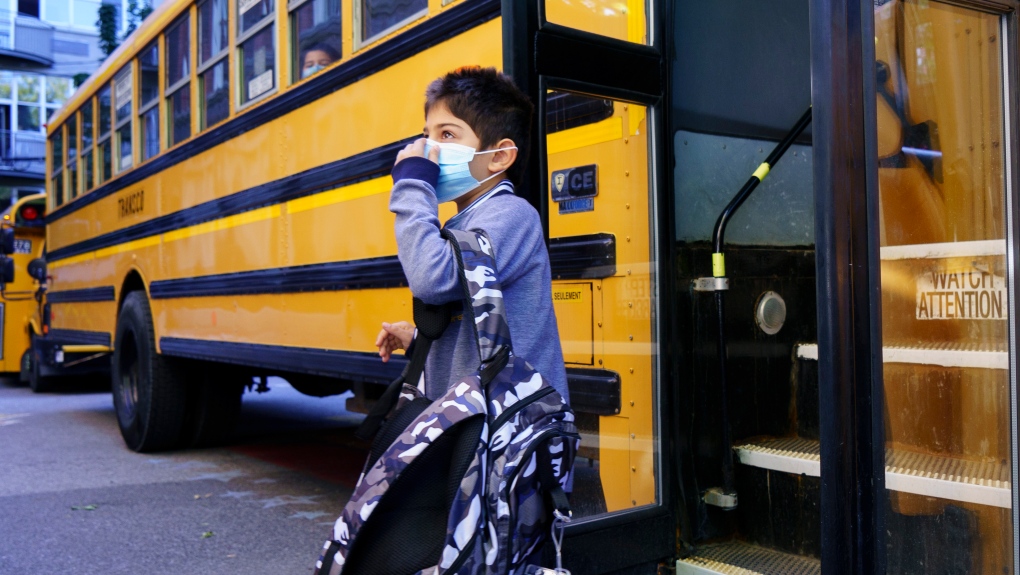 A student adjusts his protective mask as he walks off the bus at the Bancroft Elementary School as students go back to school in Montreal, on Monday, August 31, 2020. THE CANADIAN PRESS/Paul Chiasson

MONTREAL -- The Quebec government's plan to reopen elementary schools on Jan. 4, seven days after the festive period between Dec. 24 and 27 is ill-advised and based on incoherent and confused scientific reasoning and should be reconsidered.

First of all, according to Quebec public health officials, the four-day period is based on the assumption that younger students who contract COVID-19 during that period should develop symptoms before they return to class on Jan. 4, stopping them from bringing the virus to their school. That is totally incorrect for several reasons.

It is now well recognized that a considerable number of young children, especially those under 10, do not develop symptoms when infected by COVID-19. Evidence cited in a recent CDC report suggests that as many as 45 per cent of pediatric infections are asymptomatic and even if symptoms are present, they are often unrecognized and overlooked before COVID-19 is diagnosed. In one study published in the Journal of the American Medical Association (Pediatrics), of 71 children, 47 (66 per cent) had unrecognized and overlooked symptoms prior to COVID-19 diagnosis.

This means that a sizeable proportion of children infected between Dec. 24 and 27 would be attending school on Jan. 4 at the peak of their infectious level following an incubation period lasting several days.

Also, Quebec public health officials are neglecting the fact that even after the four-day festive period, children will continue to interact with their siblings and their families until the opening of classes Jan. 4, may be infected at any time during that period and start transmitting the virus several days after the start of school on Jan. 4. The scientific evidence presented above is in direct contradiction to Quebec public health officials’ claims that school opening on Jan. 4 is safe.

Another scientifically unsupported statement by Quebec public health official is that there has also been more transmission among teenagers in high schools than in elementary schools. This is simply not correct. The data on COVID-19 cases by age groups collected by the Quebec government and published daily on their website does show that there are fewer cases among five to nine-year-old children than among 10 to 19-year-olds, but this data can in no way be used to conclude that there are fewer cases of transmission among elementary schoolchildren. This is because young children, especially those younger than 10, are much less likely to develop symptoms than older individuals and as a result are tested less frequently than older children.

The main testing criteria for children in Quebec is the presence of symptoms. As such, the Quebec data significantly underestimates the number of actual cases among five to nine-year-olds because those who do not have symptoms or whose symptoms go unrecognized are generally not tested.

In addition, according to a recent analysis published in the Canadian Medical Association Journal, relying on presentation of symptoms in young children is a flawed testing approach as it underestimates COVID-19 prevalence among them and consequently their contribution of transmission of SARS-CoV-2 virus to the community. In this same analysis, Dr. Peter Juni, executive director of the Ontario COVID Advisory Board states, "Children have been dramatically underrepresented in COVID-19 case counts because they are less likely than adults to show symptoms and therefore may escape detection."

Finally, a critical aspect to consider is the very lax conditions in Quebec classrooms, which are incompatible with current known standards to prevent COVID transmission. All elementary schoolchildren are exempt from wearing masks in the classroom, there is an absence of social distancing, and classrooms are often poorly ventilated and overcrowded. This makes ideal conditions to facilitate virus propagation among children returning to school on Jan. 4 and will likely contribute to additional morbidity, mortality and suffering in the community.

In conclusion, one thing is clear, children of all ages can infect others. It is also clear that infected children often show few or no signs of illness. And it is also just as clear — though most people prefer not to talk about this — that children can also die or suffer lasting damage from a COVID-19 infection.

Based on current evidence-based scientific evidence, the decision to re-open elementary schools on Jan. 4 is extremely premature and ill-conceived from a public health standpoint. It would be highly advisable to make use of the days following the festive period to closely scrutinize how the virus will spread in the community before setting a firm reopening date.