The league said in a release that Hrabik made the gesture at Imama, who is Black, during Tucson's 4-3 win over San Jose on Jan. 12.

Tuscon is the AHL affiliate of the NHL's Arizona Coyotes.

Imama, born in Montreal to parents who immigrated from the Democratic Republic of Congo, posted a message on his Twitter account calling out abuse that he's suffered while playing the sport.

"I've been dealing with situations like this my entire life," he wrote. "As a person of colour playing youth hockey, through Junior and now twice as a professional, this keeps happening to me over and over again."

Hrabik, who has already served three games of the suspension, would be eligible to return April 3. The Czech player released a statement saying he was "ashamed of today's events and embarrassed by the actions that led to my suspension."

"I want everyone to know that I’m very sorry for what has occurred and I take full responsibility for my actions," he wrote. "People should know that I had absolutely no inappropriate intent. The gesture was made in the heat of battle and while I didn’t mean anything racist by what I did, I realize now through my own ignorance how my gesture could be interpreted."

The AHL said in a statement that Hrabik may apply for reinstatement after March 12, based on an evaluation of his progress in the education and training on racism and inclusion administered by the NHL's Player Inclusion Committee.

Hrabik is 22 years old and has spent time playing in the WHL, ECHL and AHL after leaving his home country.

Former NHL enforcer Georges Laraque was impressed by both the strict punishment and Imama's message on Twitter.

"I thought it was awesome," said Laraque. "I said it was awesome that the AHL really decided to really punish people that was going to use that racial remark because it'll be 2022. There's no place in our society for that."

"I know back in the day of Willie O'Ree I know there was no punishment for that," he said.

O'Ree played his first game for the Boston Bruins on Jan. 18, 1958 against the Montreal Canadiens. The Bruins retired his number on the 64th anniversary of that game on Jan. 18, 2022.

Laraque said seeing the AHL take such a strong stance shows the progress the sport has made.

"It's a step in the right direction," he said. "I think I sent a really good message to everyone that would even think of even trying out their racial remarks... This is going to hurt his hockey season and his future and good luck finding another team after that."

Imama said in his statement that he believes hockey has made positive strides, but the incident shows that there is still work to be done.

"We still have a long way to go to educate the ignorant and to make hockey a safe place for everyone," he wrote. 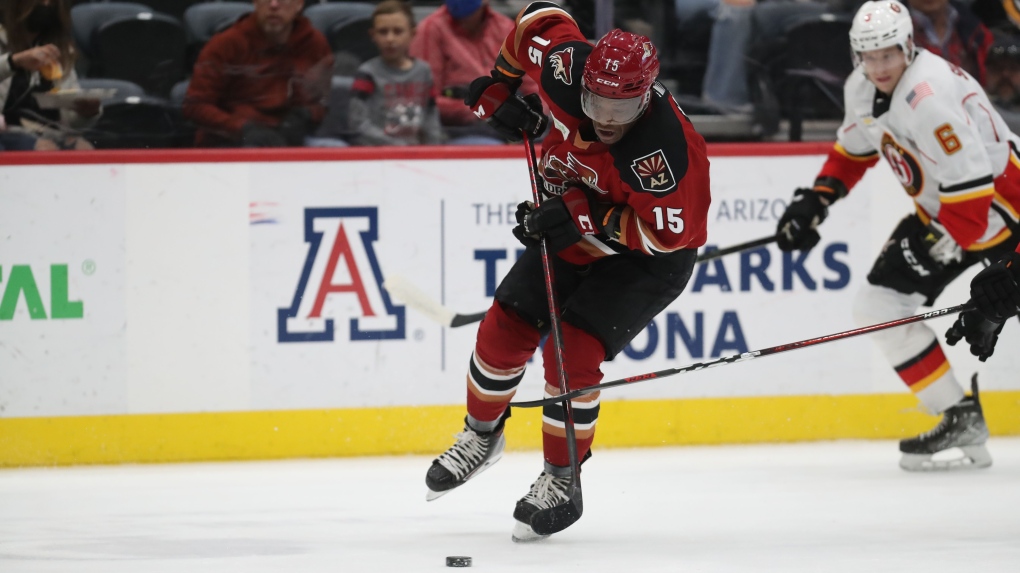 NOT THE FIRST TIME

Imama has been subjected to racist behaviour in the AHL before. Bakersfield Condors defenceman Brandon Manning used a racial slur in an altercation with Imama during a Jan. 22, 2020 game, when Imama was with the Ontario Reign.

"We have enough to worry about as pro hockey players and it saddens me when anyone has to deal with these types of situations," said Imama.

Manning was suspended five games for uttering the slur.

"It's frustrating and disheartening that this is still going on in 2022!" said Imama.

The San Jose Barracuda are the AHL-affiliate of the NHL's San Jose Sharks. The Sharks and Coyotes and their affiliates released statements denouncing Hrabik's actions.

"We are appalled by the disgusting and blatantly racist gesture that was displayed to Boko during the Roadrunners game at San Jose on Jan. 12, and support the AHL's action and suspension," the Coyotes wrote.

"The Barracuda and San Jose Sharks organizations were appalled to learn of this incident," the teams wrote. "We offer our sincerest apologies to Boko, the Roadrunners organization, the AHL, our fans, and the entire hockey community."

Hrabik asked for Imama's forgiveness in his statement, and said he respects the left winger.

"I alone am responsible for that, it was terrible, and I make no excuses. When I heard about Boko’s reaction to the gesture, I was horrified by what I had done," he wrote. "I fully accept the consequences of my actions and am not appealing the discipline imposed by the AHL."

Imama ended his statement on a positive note, hoping that it becomes a teaching moment.

"My hope is that people learn from this and that some day hockey will truly be for everyone," he wrote.

Monkeypox in Canada: Act now to stop it, expert urges, before it's too late

With 26 cases of monkeypox now confirmed in Canada, health officials warn that number will likely grow in the coming days and weeks. However, one expert says the outbreak can be stopped if the country works quickly to get it under control.

Canada's highest court has ruled that Alexandre Bissonnette, who murdered six people at the Quebec City mosque in 2017, will be eligible for parole after 25 years.

Federal Public Safety Minister Marco Mendicino will table new firearms legislation as early as next week, according to advance notice given to the House of Commons.

Former Canadian gymnast Abby Pearson Spadafora said on Thursday she had suffered years of abuse at the hands of Olympic coach Dave Brubaker and his wife Elizabeth and called for an independent investigation of the sport.

Four decades after the Swedish pop supergroup last performed live, audiences can once again see ABBA onstage in an innovative digital concert where past and future collide.