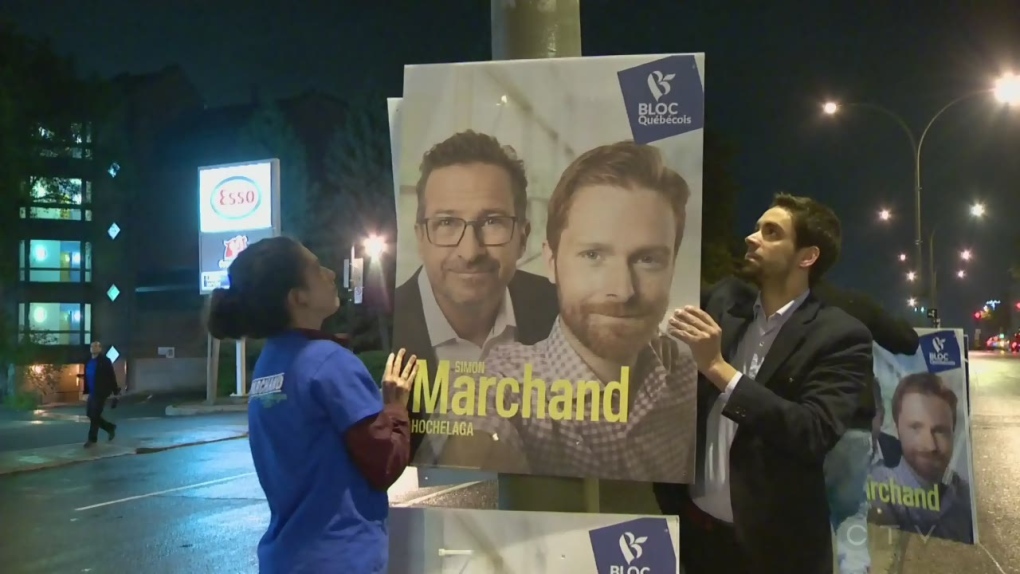 Federal election candidates have begun putting signs up across the country in preparation for Oct. 21.

MONTREAL -- Federal campaigns say they'll strive to do better after an advocacy group for the visually impaired called them out for the danger posed by low-hanging signs in Montreal.

In Montreal, election signs are often hung from streetlight and utility poles and stacked one on top of the other to ensure visibility.

But when they aren't high enough, they can cause a safety issue for those who don't see them coming, said Jerome Plante, a spokesman for the group.

Plante, with the Regroupement des Aveugles et Amblyopes du Quebec, said the problem in this city is a recurring one, cropping up during federal, provincial and municipal elections.

"The problem is that signs are often on posts, and they extend past the post. With a cane or a guide dog, you can detect the post, but you can't detect the sign," Plante said.

"So you end up running into the sign ... and it can cause injuries," he added. "We're not talking about serious injuries, but they are injuries nonetheless."

Plante posted photos online from his own east-end Montreal riding of signs that were placed far too low. Federal parties said they've been alerted to the matter and are taking necessary steps.

A spokeswoman for the Conservative campaign invited the public to let them know when a sign needs to be moved. The NDP said it would aim to fix the issue and prevent it from happening again.

"We try to install our signs in places and at a safe height where they do not interfere with pedestrian, cyclist and motorist traffic," the party said in an emailed statement.

The Liberals said they've reminded their teams of the issue.

Elections Canada said it doesn't have set rules about how election signs are displayed, and complaints are typically handled by municipal authorities.

Plante said the Montreal chapter of his group has been trying to address the issue for years. For the Quebec election last year, a guide was produced to encourage parties to consider a safe height for their posters.

"What's recommended as good practice is 2.03 metres (6 feet, 8 inches), that a poster is put up at a sufficient height so it would be above the heads (of most) people," Plante said.

Leo Bissonnette, a Montreal-based representative of the Canadian Council of the Blind, said it was the first time he'd heard specifically of an issue involving election signs.

But the retired manager of Concordia University's office for students with disabilities said sign placement can be a big issue for the blind. "I would hope that anybody placing signage would think about things," said Bissonnette, who uses a cane and guide dog. "I think it's public awareness as much as anything."

Plante said his goal was to inform the parties.

"Knowing about this issue will make them install their signs more safely in Quebec and elsewhere in Canada in the future," he said.