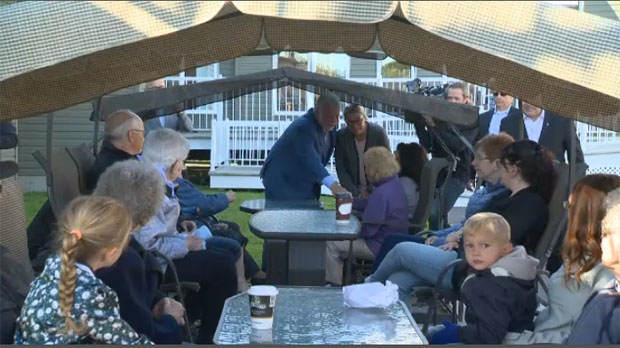 On Day 18 of the election campaign, CAQ leader Francois Legault found himself in Lac-Megantic, pledging $30 million for school textbooks and outings.

Back in June, the Liberal government announced a new directive that required free admission for any cultural activity offered by schools.

The Liberals, who recently announced $9.5 million in funding for cultural field trips, were in Trois-Rivieres on Sunday.

While visiting a seniors home, Philippe Couillard promised up to $2,400 in tax credits for families that have to adapt their homes to accommodate an elderly, live-in relative.

It comes on the heels of a similar funding announcement Legault and the CAQ made earlier in September.

A Canada-wide study showed that caregivers and their unpaid work save the health system $5 billion per year.

Del Vecchio wants their concerns to be heard during this campaign.

“You see it in their eyes,” he said. “They’re doing the best they can but they can’t keep up.”

Meanwhile, in Quebec City the PQ also focused on the environment.

“Every Tuesday or Wednesday, something wrong happens in the gas stations in the Montreal area,” he said. “That situation just begs for an inquiry.”