The Quebec government will spend the next four years trying to reverse what it says is the decline of French in Montreal and transform the province's economy while reducing greenhouse gas emissions, Premier François Legault said Wednesday.

Legault delivered his inaugural speech — equivalent to a throne speech — to the 43rd session of the legislature, almost two months after his Coalition Avenir Québec was re-elected with a large majority.

His speech touched on labour shortages and the difficulties plaguing the health system. But the thrust of his message was about Quebec's identity and how to fight climate change without damaging the economy.

"On identity, the objective is to stop the decline of French in Quebec, and in particular in Montreal — to reverse the trend because French is the base of our identity as a nation," Legault said.

"Imagine what would remain of us if we lost this fundamental link that unites us with past generations and those to come." 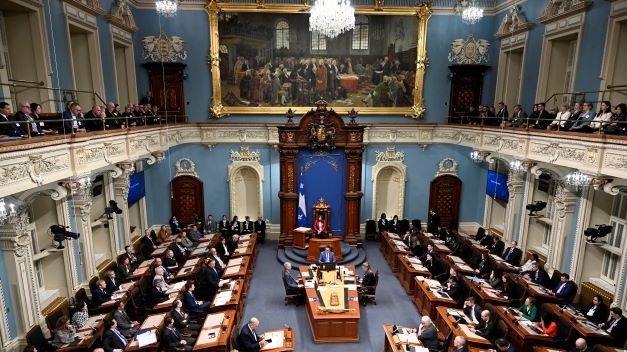 Quebec Premier Francois Legault present the inaugural speech to members of the National Assembly, at the legislature in Quebec City, Wednesday, Nov. 30, 2022. THE CANADIAN PRESS/Jacques Boissinot

"It is imperative to stop this decline and reverse the trend," Legault said, adding that his government would produce yearly statistics on the health of the French language instead of waiting for census numbers from Statistics Canada.

There is an undeniable link between immigration policy and the vitality of the French language, Legault said. All Quebecers favour immigration, he explained, but they want newcomers to be integrated properly into Quebec society.

His goal, he said, is to ensure that by 2026, 100 per cent of economic immigrants to the province speak French.

“It’s a question of survival for our language in Quebec,” Legault said.

The premier boasted that Quebec emits significantly fewer greenhouse gas emissions per capita than the rest of the continent and said the fight against climate change should not interfere with increasing Quebec's wealth.

"Quebec emits 50 per cent fewer greenhouse gases per capita compared with the rest of North America. We have to go longer and faster (to cut emissions) but we also have to co-ordinate that with our goal to eliminate the wealth gap."

Quebec's government has pledged to have net-zero greenhouse gas emissions by 2050.

Legault said the province will need the equivalent of half the total output of Hydro-Québec — 100 terawatt hours more — by 2050 to meet the province's energy demands, adding that government must consider building new dams to do so, something that can take up to 15 years.

"So we need in the next mandate to have a real societal debate on how we will get this 100 terawatt hours and realize that more than ever, our electricity in Quebec is precious," Legault said.

On health care, Legault repeated his call on the federal government to increase its share of funding.

"We are reasonable, we say the federal government should go from 22 per cent to 35 per cent … and (the health transfers) must be indexed at five to six per cent (a year) because the impact of aging is increasing spending at this rhythm," Legault said.

Quebec's second opposition party, Québec solidaire, said Legault is using the wrong numbers to determine the health of the French language, adding that the premier seemed to have softened his language on immigration. Legault had been criticized during last summer's election campaign for his rhetoric on immigrants — including for tying immigrants with violence and extremism.

“What needs to be debated is French as the language of use (at work),” Gabriel Nadeau-Dubois, spokesman for Québec solidaire, said in reference to Legault's comments about the language people use in their homes.

“It is not up to the premier to manage what language the world speaks by tucking in their children at night.”

This report by The Canadian Press was first published Nov. 30, 2022.