Eating and drinking on public transport strongly advised against, but not forbidden 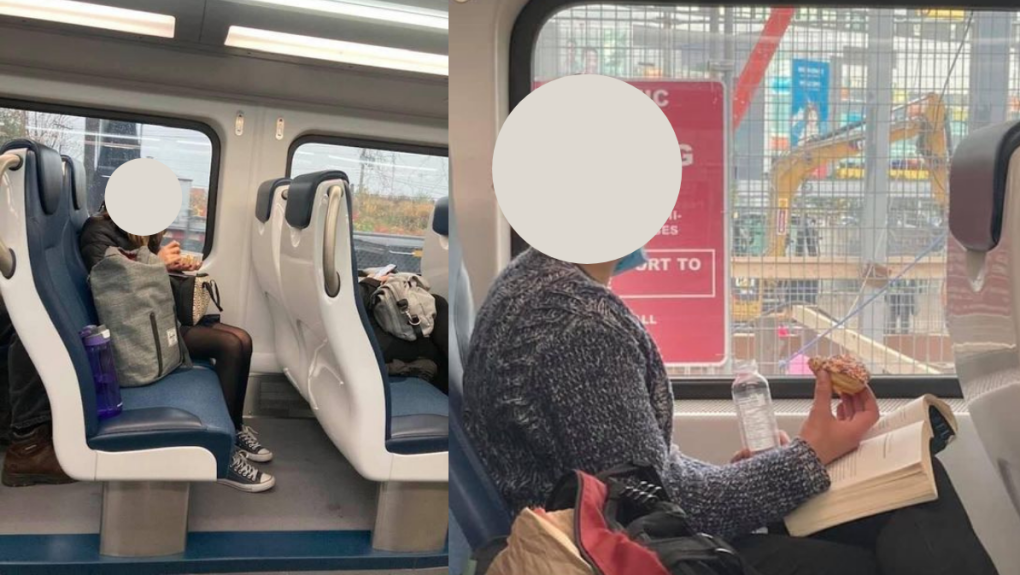 Train users have been caught on camera eating while on an Exo train line despite the rule being that you must wear a mask while on public transportation.

MONTREAL -- You must wear a mask on transit, but it is only recommended that you not eat or drink while riding a train, bus or metro in Montreal.

The seemingly contradictory rule prompted one Exo train user to start taking pictures of people eating on the train to show how people aren't following the health measures put in place during the COVID-19 pandemic.

"Over the last few months, I have documented many people removing their masks for what I can only describe as full-on picnics," the user said. "I have reported people to the conductor only to be told that nothing can be done if people want to eat."

Montreal director of public health Mylene Drouin said Wednesday during the city's weekly COVID-19 update that it is highly recommended to not eat or drink on public transportation echoing the comments from the STM and Exo spokespeople.

The point may be moot as the STM rules indicate that you must wear a face covering at all times if you are over 10 years old.

Exo spokesperson Catherine Maurice said the company has not had any major issues reported from drivers or staff and that people have been following the mask guidelines.

On the company's website, Exo recommends not to eat or drink onboard, touch surfaces and other recommendations.

"Not because your culinary choices might inconvenience people, but to avoid the risk of contamination by putting your hands to your mouth," the recommendation says.

However, it is not a rule.

Dery said changing the rule about eating and drinking would require a formal procedure that takes time, as well as finding a way for employees to enforce the rule.

"Given the obligation to wear a mask or face-covering, we rely on our clients' good judgment to follow a strong recommendation," he said. "The vast majority of clients wear their masks and follow the guidelines."