MONTREAL -- As excavations of unmarked graves continue in Canada at former residential school sites, a growing voice is calling for the Quebec government and Catholic Church to begin similar excavations of former psychiatric hospital sites where so-called Duplessis Orphans were once forced to live.

Marc Boudreau was an orphan and described his childhood as hell.

"I was abused mentally, psychologically, from all points of view," he told CTV News. "I was abused sexually. I was beaten. I also lost an eye."

Boudreau was one of the thousands of Duplessis Orphans in Quebec in the middle of the 20th century, an era sometimes called “the Great Darkness (Le Grande Noirceur).”

Named after former Quebec premier Maurice Duplessis, the children were wrongly labelled "mentally retarded" by government doctors and transferred to a hospital for the mentally ill run by the Catholic Church.

Boudreau and other orphans witnessed or heard about children dying in the institutions in the 1940s and 50s.

Author Joanna Goodman's historical fiction novel "The Home for Unwanted Girls" and its follow up "The Forgotten Daughter" chronicles an orphan's journey as she is re-categorized as mentally ill and transferred from an orphanage to a mental hospital in Montreal where she is abused regularly and witnesses fellow orphans’ deaths.

While researching her book and speaking to orphans, Goodman said she was told horrific stories about how the children died and how the authorities at the hospitals dealt with their bodies.

"There were many, many, many deaths, whether from drug overdoses, beatings, scientific experiments gone wrong, and they would carry them out in the night and dump them," said Goodman. "It was very similar to what was happening with the residential schools... They just used to take them out like trash and bury them."

Journal de Montreal journalist Laurent Soumis reported in 1999 and 2000 on rumours of a "pigsty cemetery" at the Saint-Jean-de-Dieu establishment in Montreal.

Numerous orphans claimed their peers were buried there in cardboard boxes.

Rod Vienneau wrote in his book 'Collusion: The Dark History of the Duplessis Orphans' that the alleged burial site was named as such because it was where pigs were kept.

A country musician, Vienneau has led a campaign to find justice for the orphans and highlight the abuses orphans faced. He hung up his guitar and shelved his career to help his wife, Clarina Duguay, who told him something around the year 2000 she'd never spoken of in their 25 years of marriage.

"My wife, she said, 'I'm one of them,'" said Vienneau. "This touched me a lot... Then I did some research to find her documents and everything and that's when I got into the case. I left the music aside to see if I could get justice." Members of the Duplessis Orphans group demonstrate outside the Notre Dame Basilica in Montreal, Friday, April 2, 2010 where they called for an apology from the catholic church and for more compensation for sexual abuse victims.THE CANADIAN PRESS/Graham Hughes

After being rejected by several potential attorneys, Vienneau asked lawyer Alan Stein to take the case, who filed for an authorization for a class action in 2018 in Quebec Superior Court, which was rejected, saying it didn’t meet the requirements for a class action suit.

Stein appealed the decision to the Quebec Court of Appeal, which has agreed to hear the evidence.

For Stein, a settlement in 2000 and lack of true apology mean the Duplessis Orphans have not received proper justice for the abuse they suffered.

"Never," he said. "It's been a total miscarriage of justice in my opinion."

Vienneau has since been contacting orphans around the world to add their names to the case so they can have their day in court.

In addition to Boudreau and a co-lead plaintiff named as "N.P." in the case, 1,451 former orphans have signed on to the case.

Boudreau said he has been waiting for justice for a childhood that changed dramatically when he was transferred from an orphanage in Rimouski to the Monastery of Huberdeau in Argenteuil, Que., over 600 kilometres away.

"I told myself maybe one day we will get justice," he said. "It is like a hell that we have to live with and we are trying to get past it."

Many, however, did not survive long enough to fight.

He said about three-quarters of them have died either at the schools themselves or after they were released.

Nine religious organizations, including Montreal's Grey Nuns, and the Quebec Attorney General are listed as defendants.

The case is open to "all persons, and estates of deceased persons, who were victims of either psychological, and/or physical and/or sexual abuse, and/or subjected to persecution and/or human experimentation at any of the institutions operated/administered or directed by the Respondent congregations in the province of Quebec." 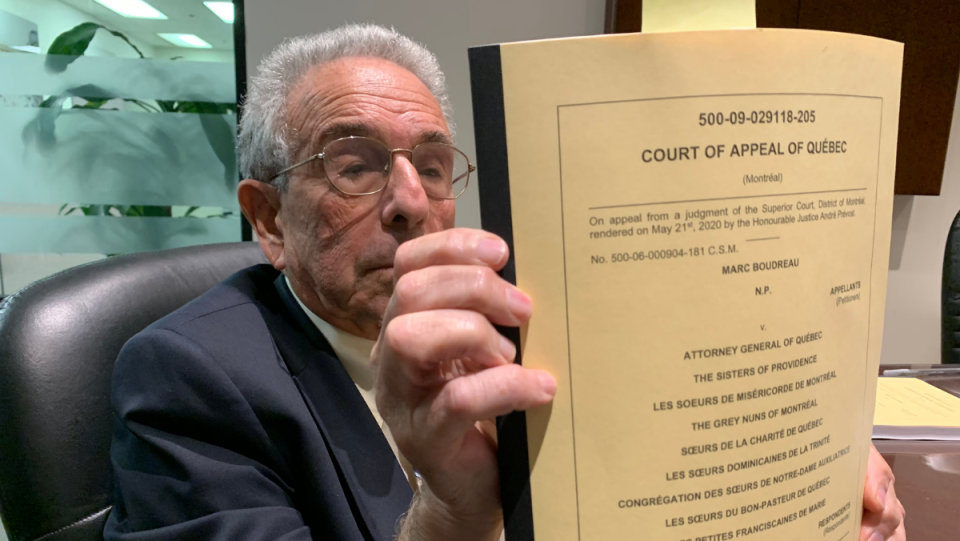 Lawyer Alan Stein is representing more than 1,400 Duplessis Orphans who are searching for compensation from the Quebec government and nine Catholic organizations that ran psychiatric hospitals in the mid-20th century. (Daniel J. Rowe/CTV News)

The orphans were often the children of unmarried young women, who handed their "illegitimate" children to the Catholic-run organizations from 1949 to 1956.

Because subsidies were higher for psychiatric hospital patients than orphanages, the children were labelled deficient and institutionalized so the institutions could receive more funding.

Grey Nuns executive director Hubert Gauthier said he would need to check records regarding who was at the orphanages and hospitals and whether they died.

"The institutions that the sisters managed, they knew who was coming in and who was going out," he said. "Sometimes the parents existed, sometimes not."

Former Quebec premier Lucien Bouchard offered a public apology to the orphans on March 4, 1999, but "without blaming or imputing legal responsibility to anyone."

The apology came after a criminal investigation where 240 orphans alleged 321 criminal accusations against those running the hospitals.

"It was an insult," said Stein adding that many orphans accepted the money as they found they had few options. 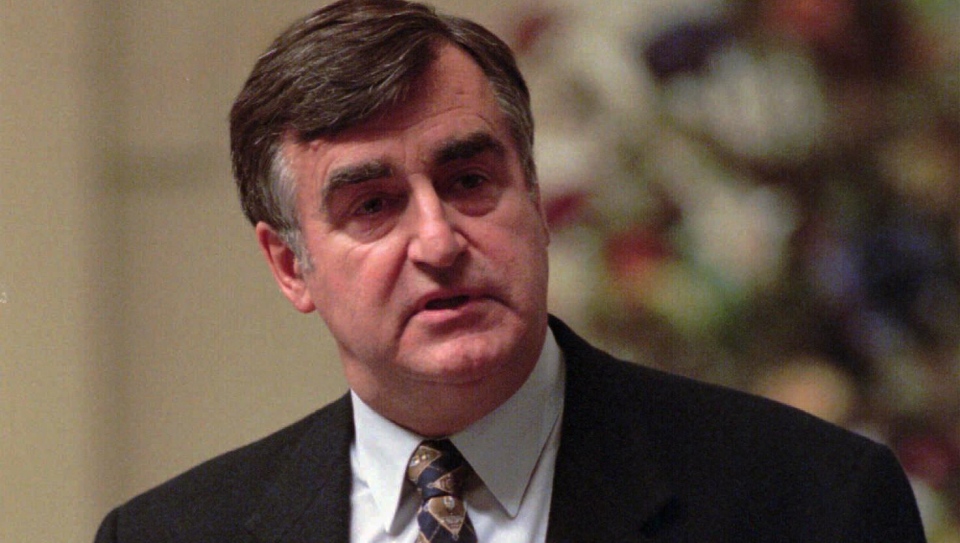 Then-Quebec ombudsman Daniel Jacoby criticized the government's handling of the orphans' case at the time.

In accepting the settlement, they signed a release not to sue the government, which Stein argues is invalid.

"My opinion is that release does not cover either the government or the other third parties," said Stein.

The suit reads that the payout was not a "settlement of claim in the context of sexual and physical abuse suffered by orphans, who were children, but rather financial assistance for them who attended certain institutions at various times."

Gauthier feels the three parties found closure in the settlement.

"That issue has been closed for the Grey Nuns from 1996 onwards to 2002 or 03 when the government made a complete settlement for all of these people," said Gauthier. "The score was settled then by Bouchard... At that time, the three parties, the organization representing the orphans and the organization representing the sisters said that they were happy with the settlement."

COURT OF APPEALS TO HEAR CASE

After a Superior Court judge declined the authorization for a class action, Stein took the case to the Quebec Court of Appeals, which the government moved to have dismissed.

The government and religious institutions that ran the hospitals will now file their fact sheets and then they will schedule a Court of Appeal date.

For Boudreau and his fellow orphans, an apology and proper compensation are long overdue.

"We are human beings," he said. "We have emotions. We have sentiments we have qualities and faults. We are not perfect, (but) nothing is perfect in life." 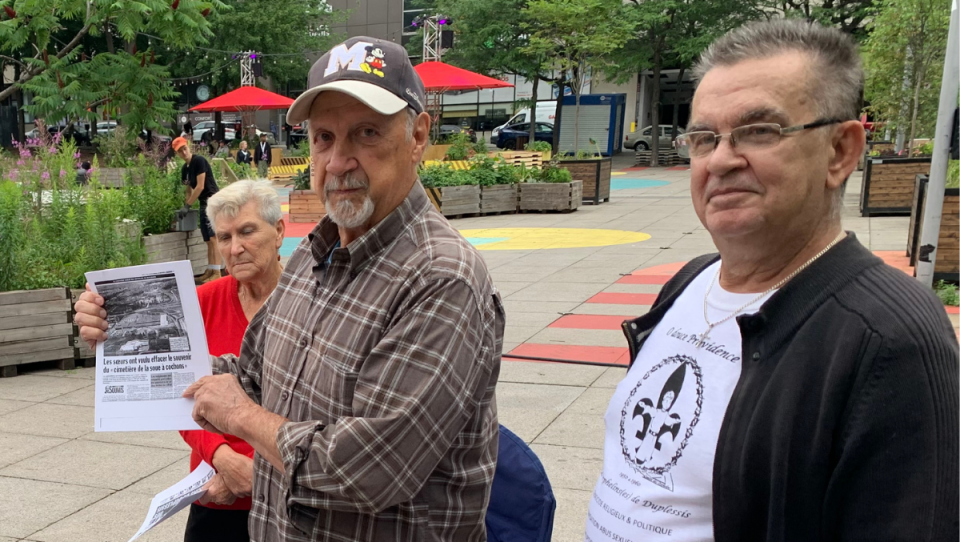 Duplessis Orphans Clarina Duguay (left) and Marc Boudreau (right) have been searching for a true apology and some justice,. and are being helped by country music singer Rod Vienneau. (Daniel J. Rowe/CTV News)

-- with reporting from Billy Shields and Lilly Roy