Dumping raw sewage into rivers and lakes is common throughout Canada 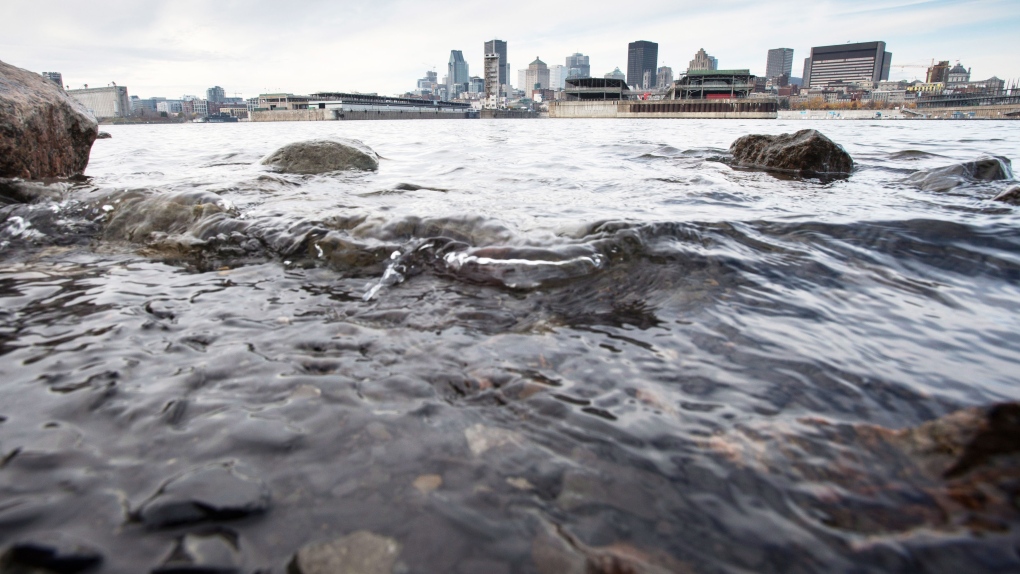 The waters of the St. Lawrence River flow past the city of Montreal Wednesday, November 11, 2015. (Paul Chiasson / THE CANADIAN PRESS)

OTTAWA -- Last Wednesday, a team of people from the Lake Ontario Waterkeeper environmental group descended on the Toronto harbourfront looking for any signs the previous night's massive, flash-flood rainfall had caused the city's ancient combined sewer system to overflow into the lake.

They didn't need to dip a single test tube into the water to know it had.

There, in plain sight and floating around the docks and pedestrian bridges along the waterfront of Canada's biggest city, was a toxic stew of used condoms, plastic tampon applicators and mounds of shredded toilet paper, along with a countless quantity of other, unidentifiable solids.

When water testing was done, the levels of bacteria "were off the charts," said Krystyn Tully, vice-president of the national water advocacy group Swim Drink Fish.

Toronto, like the vast majority of Canadian cities, doesn't monitor real-time data of sewage leaks into lakes, rivers or oceans. As a result, it's unknown how much raw sewage flowed through overflow pipes when the storm overwhelmed the city's treatment facilities.

Environment Canada does require municipal governments to report annually how much untreated wastewater is spilled, but settles for calculations that are based on computer models, rather than specific data of actual events.

Data provided by the federal government shows in 2017, municipalities reported 215 billion litres of raw sewage were spilled or leaked without being treated. Enough to fill 86,000 Olympic-sized swimming pools, that represents an increase of 10 per cent over the amount reported five years ago.

Over the last five years, the total amount is in excess of one trillion litres.

About two-thirds of the amount of reported in 2017 was purposely released when rains overwhelmed water systems that use a single pipe for both storm sewers and wastewater. When storms happen, the excess water can't be handled by treatment plants and must be released into waterways to prevent basement backups.

The rest is usually the result of problems like power outages, system breakdowns or leaks. Tully, whose organization has monitored the Toronto inner harbour for the last three years, said whether it rains or not, "there isn't a day that we've gone to the harbour that we haven't been able to find some evidence of sewage contamination."

The largest contributor to the national problem is British Columbia, where municipalities reported 77 billion litres of raw sewage that leaked or was spilled in 2017, followed by Nova Scotia at 39 million litres, Newfoundland at 29 million litres and Ontario at 22.8 million litres.

Those numbers are nowhere near the actual amounts being leaked, said Tully.

Data she obtained from Environment Canada said in 2016, only 159 of the 269 municipal water systems that are required to report sewage leaks actually did so. The agency is supposed to investigate every missing report, but Tully said the government is more focused on providing education and technical assistance.

Environment Canada also does not publicly report each spill, and very few cities do it themselves. Last year, the Ontario city of Kingston became the first in Canada to install monitors in its pipes to measure how much sewage is being leaked; the city now reports publicly in real time every time it happens.

When Kingston began using the monitors, it also found that its earlier calculations were significantly underestimating how much untreated sewage was actually being discharged, Tully said.

The municipality felt real-time monitoring was the best way to serve the public, said Jim Miller, director of utility engineering for Utilities Kingston. The eventual plan is to eliminate all its combined storm and wastewater pipes, but that will take time, he added.

"This is a long-term solution," Miller said. "It's not going to happen overnight, but in the long run it is the most effective solution."

The cost to addressing the leaks is large and the projects take a long time to finish. The Federation of Canadian Municipalities estimates it will cost cities $18 billion to implement new regulations introduced by Ottawa in 2012 that toughened standards for treating wastewater. Those standards aren't yet in effect; high-risk systems have until 2020 to meet them, while those deemed low risk have until 2040.

Those regulations do nothing to require cities to address the problem, even as the effects of climate change amplify the frequency of extreme rain events -- a phenomenon that risks making flash floods like last week's in Toronto far more common.

Several cities are taking on the challenge without regulation. Victoria, where decades of untreated wastewater being released into harbour prompted nearby Seattle to warn tourists from visiting, is spending $765 million to build a new treatment plant that will come online in 2020.

Tully said she thinks Canadians are appalled when they hear about the sewage, but that public reporting of the issue needs to be much more detailed and complete, with cities being required to actually monitor their leaks.

"The first thing they need to do is actually track what is coming out," she said.

Environment Minister Catherine McKenna wasn't available for an interview Friday. But she's familiar with the problem: just days after becoming minister, she was forced to allow Montreal to purposely dump five billion litres of sewage into the St. Lawrence River so it could fix a pipe.