Quebec Conservative Party Leader Eric Duhaime campaigned in his own Chauveau riding Saturday, urging residents to vote for him, or risk the “electoral distortion of the century.”

Chaveau is a large, mostly rural riding north of Quebec City. Duhaime is up against incumbent CAQ candidate Sylvain Levesque.

According to recent projections on QC125, Duhaime is trailing Levesque by about 6 per cent support. With advanced polling set to begin Sunday, Duhaime returned to the riding to rally his base.

“I want to speak to the voters of Chauveau to ask them to support the Conservative Party of Quebec,” he said. “We want to avoid, at all costs, this electoral distortion of the century.”

That “distortion” refers to the projected disconnect between Conservative support and the likelihood that it will translate into election wins.

Duhaime has led his party out of relative obscurity over the course of the campaign. In terms of popular support, the Conservatives are frequently put in second place by pollsters, behind the CAQ.

Saturday night polls put the Conservatives at a deadlock 15 per cent support with Quebec Solidaire and the Quebec Liberals.

However, unlike those other parties, Conservative support is unlikely to result in double-digit seat victories.

Based on vote distribution, Liberals were projected to pick up between 12 and 23 seats Saturday. Quebec Solidaire could count on between five and 15.

As for the Conservatives, zero to five.

“It’s important that we are represented at the National Assembly,” said Duhaime. 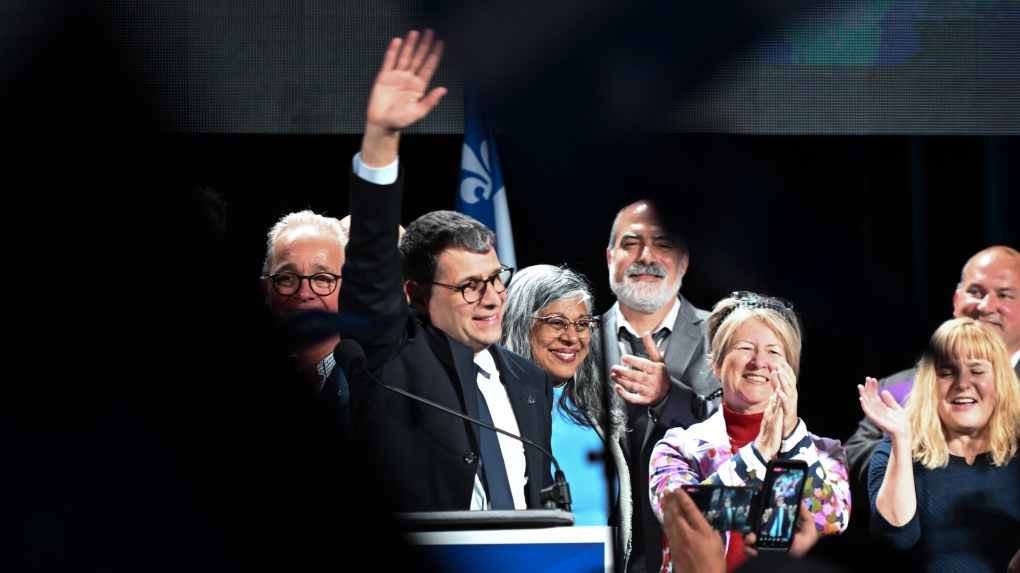 Quebec Conservative Leader Eric Duhaime waves to the supporters at a party rally Friday, September 23, 2022 in Levis Que. Quebecers are going to the polls for a general election on Oct. 3. THE CANADIAN PRESS / Jacques Boissinot

The party also turned heads in Quebec, and likely south of the border, for a recent paid article in support of the party appearing in USA Today – a popular American news outlet.

The article, entitled "Éric Duhaime, leader of the Conservative Party of Quebec, on taxes" described Quebec households as “among the most taxed in the world,” and added that “a fiscally responsible government could increase the disposable income for more than 90% percent of Quebec taxpayers overnight.”

Duhaime’s media relations officer told CTV the article was part of an international publicity package purchased from a marketing firm.

The article, which was published in English, also offered an American audience some backstory into the Quebec candidate.

“Duhaime learned about finances from his parents. ‘They were entrepreneurs at heart, they taught me the value of money'," it read. "'I grew up to be even more disciplined than they were'.”

Celine Dion has stiff-person syndrome, here’s what that means

Canadian singer Celine Dion was diagnosed with stiff-person syndrome, a rare neurological condition with no cure, forcing her to take a step away from her world tour.

A new list by OpenTable shows the 100 "most beloved" Canadian restaurants in 2022, based on more than one million reviews.

Jennifer Lawrence shared her thoughts on the history of female-led action movies in a new interview, but the 'Hunger Games' star is getting some flack for not quite getting it right.

A woman is dead and another has serious injuries after a stabbing at High Park subway station in Toronto on Thursday afternoon.