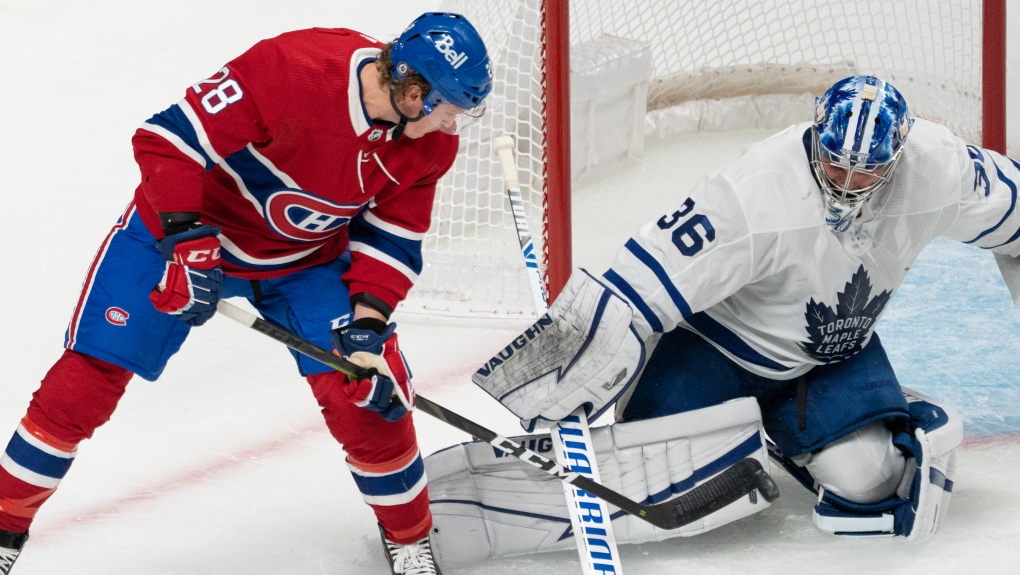 MONTREAL -- Christian Dvorak, Jonathan Drouin and Josh Anderson are apparently ready for the season to begin.

The trio generated three power play goals as the Montreal Canadiens defeated the Toronto Maple Leafs 5-2 on Monday night at the Bell Centre.

The Habs lost their first pre-season game 4-1 on Saturday in Toronto. The players in uniform Monday for the Tricolore were all in their first outing of the campaign.

Dvorak, Drouin and Anderson combined for three goals and six assists in the game. Dvorak, who was acquired just a few weeks ago, already seems to have developed a nice rapport with his new teammates.

Michael Pezzetta also scored two goals for the Habs, the second one in an empty net late in the game.

On the attack, Jan Mysak created a few chances with some nice chances. He also collected an assist on a Pezzetta goal.

It was a tougher night for Chris Wideman, playing alongside prospect Corey Schueneman.

Jake Allen was solid in net, stopping all 15 shots he faced in his 29:46 of play. In relief, Kevin Poulin gave up two goals on 22 shots.

David Kampf and Ondrej Kase scored for the Maple Leafs. Jack Campbell allowed three goals on 12 shots in 29:46 of play, and Petr Mrazek gave up one goal on eight shots after that.

The Habs will play their next pre-season game on Friday when they visit the Ottawa Senators.

HOT OUT OF THE GATES

In a sign of things to come, Anderson nearly got a break away in his first appearance on the ice. He just got ahead of the puck in the offensive zone and the linesman called an offside.

Anderson finally opened the scoring 9:24 into the game on the power play. On a scrambling zone entry, the puck found its way behind the Maple Leafs' defenders. Anderson stepped on the gas and picked up the puck. He immediately fired a sharp shot past Campbell in the top corner.

The Habs came back at 13:06, again on the power play. Dvorak completed a nice play initiated by Joel Armia and Drouin and only had to deflect Drouin's feed into a gaping cage.

Pezzetta extended the lead to 3-0 after 9:46 of play in the second period, deflecting an inaccurate Mysak shot into the net. Both teams took advantage of the timeout to change their goaltenders.

The Leafs welcomed Poulin back by beating him 90 seconds into the game. However, Adam Brooks' goal was disallowed due to an offside call on the zone entry.

Kampf scored at 11:15 in the shorthanded period when he speared the puck as Poulin attempted a feed to his left.

Anderson gave the home team a three-goal cushion at 12:40, again on the power play. He caught Mrazek on the glove side while surrounded by all four Maple Leafs skaters.

Kase scored the Leafs' second goal with 1:03 remaining in the second period after a long stretch in Habs territory. Kase took a perfect pass from Morgan Rielly to beat Poulin.

Both goalies did well in the third period. While Poulin held down the fort in the Habs' end, Mrazek made a name for himself by frustrating Pezzetta and Anderson with the mitt on breakaways.

Pezzetta closed the books with a shot into an empty net with 1:49 remaining.