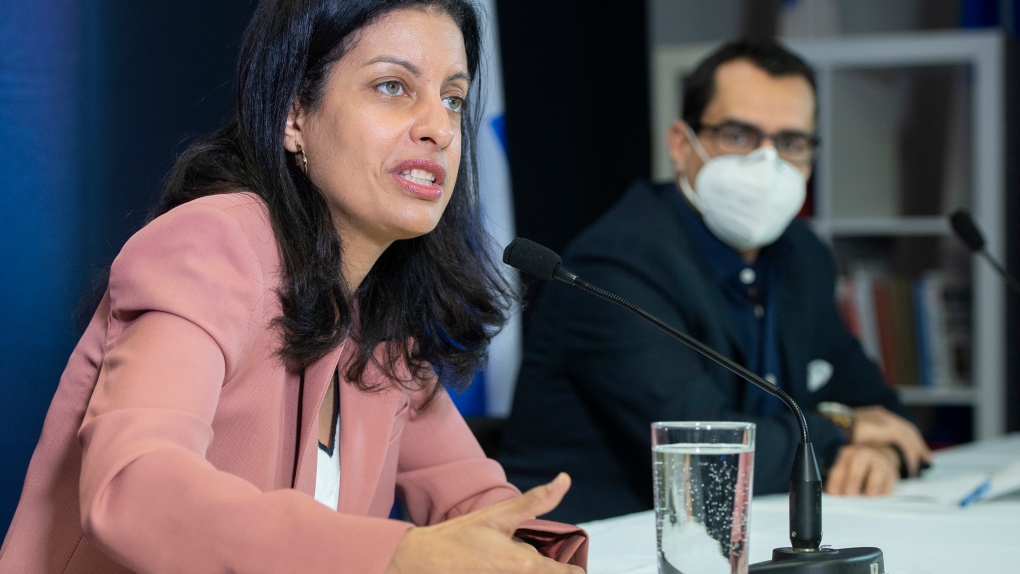 Liberal leader Dominique Anglade says her five-point proposal would allow Quebecers to live with the virus. She says a unit called “Co-Vie” would coordinate the reopening of various sectors of the economy.

“So far there’s been no demonstration of the ability of the government to anticipate what’s going on,” Anglade said on Sunday while surrounded by members of her shadow Cabinet.

“And if there is somebody who is anticipating [this], tell me who it is. Because on Dec. 30 there was no proof of anticipation whatsoever.”

Anglade was referring to an announcement made the day before New Years Eve, which re-imposed a curfew and forced the last-minute cancellation of all further holiday gatherings.

“There [were] no recommendations, no written recommendations from Sante Publique,” she said, adding that there was no data provided proving the necessity to close restaurants.

The opposition urged the government to better communicate its intentions with the public and the business community in anticipation of post-COVID deconfinement.

“When you talk to business people, the key word is predictability. Restaurants want to have a date, a deadline to ensure the viability of their business,” said Liberal economy critic Marc Tanguay.

LISTEN ON CJAD 800 RADIO: Quebec Liberal Party leader Dominique Anglade talks to Andrew Carter about her party's ideas for getting back to normal after COVID-19.

The party is also advocating for a clear separation between the role of the public health director and the premier’s office. Interim director Luc Boileau and his predecessor Horacio Arruda were often criticized for toeing the party line imposed by Francois Legault, while in most other provinces, they are two separate entities, which critics say provides better scientific independence.

Finally, the party is urging Quebec to better prepare itself in the case of yet another COVID-19 variant in the future. A long-term approach would require, for example, stocking up on medical supplies, testing kids, vaccines and air purifiers.

“What we are asking today is for the government is to have a clear plan for the next wave and to be ready,” said the Liberal health critic Monsef Derraj.

But the Quebec health ministry says they are “already in constant contact with the sectors affected by the closures due to the Omicron variant, as evidenced by our assistance programs.”

A spokesperson told CTV News that “creating a new structure at this time would only make things more difficult.”

“Dominique Anglade accuses us of managing by decree, but we haven’t heard from her what she would have done to stop the exponential explosion of cases last December. Let’s be serious...” the statement continued.

Anglade said she left a table attended weekly by the premier and opposition leaders, accusing the CAQ of using the discussions to improve the party’s image without taking into any suggestions into consideration.