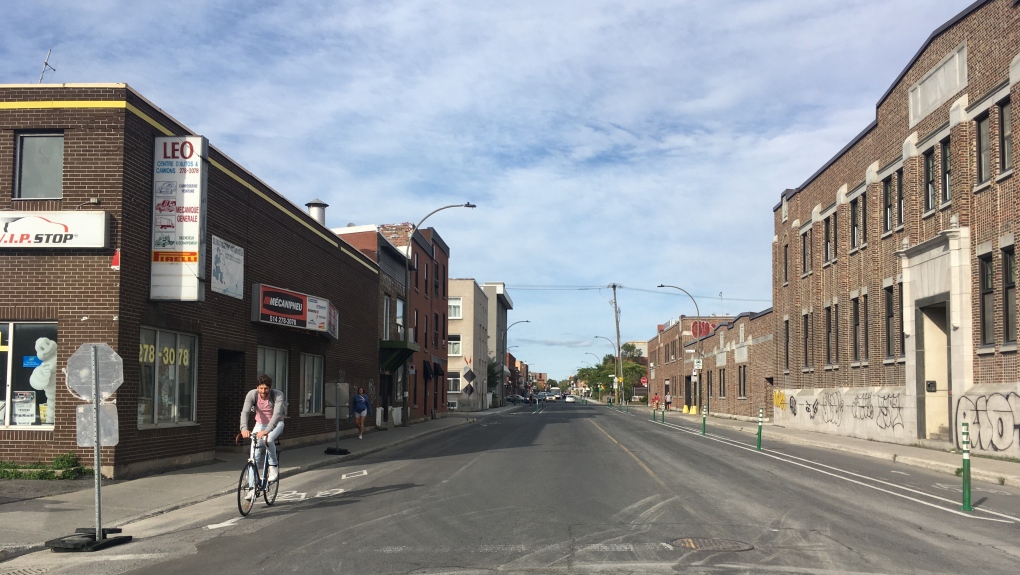 Bellechasse Street has two bike paths on either side. (Selena Ross/CTV News)
MONTREAL -

At an afternoon press event, the mayoral candidate said the paths have hindered local businesses and have made it challenging for delivery trucks to park legally.

"If we leave it the way it is, [some] businesses will close. We need cohabitation and respect," he said.

Bellechasse, a westbound one-way street, is currently sandwiched between two one-way bike paths. Should Coderre be elected, the westbound path will be replaced by parking spaces, with the eastbound path staying intact.

The path is a connector — it links St. Denis and points east to a popular Canadian Tire and a heavily used car-free path along the railroad.

MOTORISTS VS. CYCLISTS: THE AGE-OLD BATTLE

"One day [Coderre] is the defender of public safety and this morning he is ready to sacrifice the safety of Montreal families to make electoral gains," wrote François Limoges on Twitter, who is the Project Montréal candidate for Rosemont-La-Petite-Patrie.

But, according to Coderre, in some regards, the paths are hindering safety. He said delivery trucks are forced to park in the bike lanes.

"That's good, isn't it? It's very safe," he said sarcastically.

"And when seniors are trying to disembark, and there are bikes left and right, that's not co-habitation," he added.

One longtime resident of Petite-Patrie told CTV News he wasn’t too impressed by the idea. For locals, the bike lane is useful, said Gilles Michaud, 67.

“I don’t know if I was a driver, if I’d appreciate it,” said Michaud, who has lived in the area for 40 years and uses a bike to get around.

But “if we put all the cyclists back in cars, one person per car, that’s not better either,” he said.

When it comes to striking a balance, “perfection doesn’t exist,” he said.

He doesn’t have the impression that parking is particularly difficult for locals, since newly added lanes on the north-south streets, like Saint-Dominique, haven’t removed parking.

Another cyclist using the path on Wednesday said he bikes on it daily for his commute to work and has “definitely” used the street a lot more since a proper lane was put in.

“I think it’s fun to be able to feel safe,” said Choan Marchand, 23, who lives in Mile End and works in Rosemont.

But as is common when it comes to cycling issues, Coderre may find that support for the idea has little to do with its popularity among locals, but has much more to do with people who drive into the area from the suburbs.

Jasmine Rex, who drives in from Cote-Vertu to her work near Bellechasse, said increasing free parking is always a good idea.

“I think they charge $100 for parking,” she said from behind the wheel, pointing a garage nearby. Her coworkers are always circling the blocks, looking for a free option, she said.

In Rex's opinion, it doesn't make sense to use up all that on-street real estate for bikes when it’s barely used for cycling in wintertime.