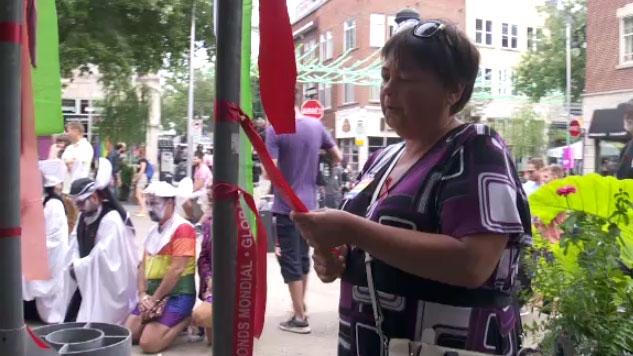 Montrealers gathered to remember Canadian victims of AIDS and to call on the federal government to contribute $925 million over three years to fight the disease globally on Sat., Aug. 17, 2019.

Montrealers gathered for a Pride Week event on Saturday dedicated to remembering Quebecers who lost their lives to AIDS and demanding the federal government due more to combat the disease worldwide.

The rally was hosted by ONE, an organization dedicated to ending poverty and preventable diseases. ONE media manager Justin McAuley called on the federal government to spend $925 million over three years on the Global Fund, saying that sum would save over 780,000 lives.

“The global AIDS crisis is not over,” said ONE’s Canadian Director Stuart Hickox. “We’re rallying people here in Montreal to remember the people lost in Canada to AIDS and people continue dying of AIDS overseas.”

According to ONE, the Global Fund is replenished by donations from various governments every three years. In between 2014 and 2016, Canada contributed $650 million. Hickox called the increase to $925 million “the minimal amount required to do our fair share to end AIDS by 2030.”

“This was a battle that was much more intense and personal in Canada in the past. People were dying of AIDS in Canada, here in Montreal. It’s still happening overseas,” said Hickox. “It’s a good investment. The Global Fund is a proven international mechanism that delivers health infrastructure and treatment and also provides safe places for LGBTQ groups in developing countries to get the help they need.”

The rally was hosted by Montreal drag queen and HIV/AIDS activist Uma Gahd.