Several hundred people responded to the Quebec Federation of Planned Parenthood's invitation to rally outside Montreal's courthouse, while other protests took place across the country since the decision to overturn Roe v. Wade was announced on Friday.

The chanting protesters carried signs reading "My body, my choice," "Back to the future," and "Abort the court, no uterus, no opinion."

"It's just downright evil that 50 years on after fighting for our rights, we still need to continue doing so," said protester Rachel Paton. "This is a human rights issue … our bodies shouldn't be a legal issue."

All women who spoke to The Canadian Press expressed sentiments of anger and weariness over the ongoing fight to have their bodies and decisions respected.

"This is terrifying, I can't really stop thinking about women who came before us, and what the future is going to look like," said protester Amanda Doran.

"To everybody who might underestimate us, we are the descendants of the witches you weren't able to burn," Legault said amid cheers from the demonstrators.

Legault previously said that while abortion rights can't be threatened the same way in Canada as it is a legal medical procedure, she fears the U.S. decision will fuel the rise of pro-life groups and feed into disinformation around the practice.

Overturning a right to abortion, she added, is worrying for women's rights and safety.

"We are not in favour of abortion for all, we aren't promoting it," Legault said. "We are for pregnant women's rights. Abortion needs to stay legal and safe for everyone so that pregnant women who want to end their pregnancy can safely do it."

One protester dressed up as a character from the TV series and Margaret Atwood's novel The Handmaid's Tale and carried a sign that read "This is no longer fiction." 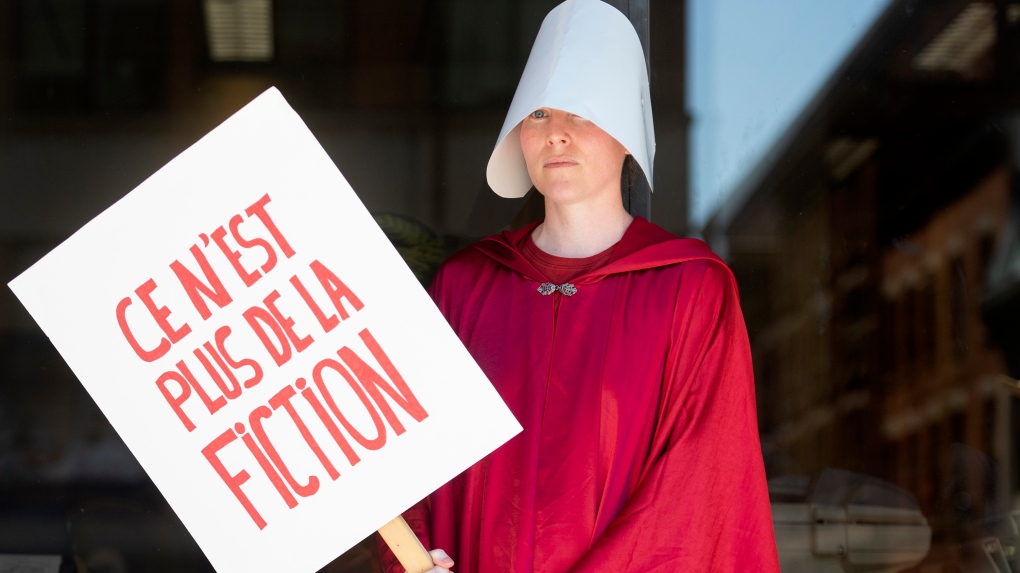 People take part in a protest to denounce the United States Supreme Court's decision to overturn the law that provided the constitutional right to abortion for almost 50 years, in Montreal, Sunday, June 26, 2022. THE CANADIAN PRESS/Graham Hughes

Among the protesters in Montreal was Quebec solidaire Spokesperson Manon Masse. She said while showing solidarity with American women, it's also crucial to remember that women's rights, even in Quebec, shouldn't be taken for granted.

"We are experiencing a major setback," Masse said. "We were here, in the streets of Montreal, 50 … 100 years ago, women were here to say, 'our bodies belong to us so get out of the way."'

Martha Paynter, one of the event organizers and chair of Halifax-based reproductive justice organization Wellness Within, said the publicity arising from the decision is an opportunity to communicate to patients about options where they live and to press government for more funding for reproductive and sexual health.

She also cautioned against any attempts to legislate abortion rights in Canada as a reaction to what's happened south of the border, saying the existence of a law would make it vulnerable to being changed or even removed.

"My right to bodily integrity is not something that the law bestows upon me," Paynter said in an interview on Sunday. "It is inherent and intrinsic."

She said if anything, there will likely be increased demand in Canada from U.S. patients seeking help.

"As providers of care we need to organize ourselves so that we can accommodate those patients," Paynter said. 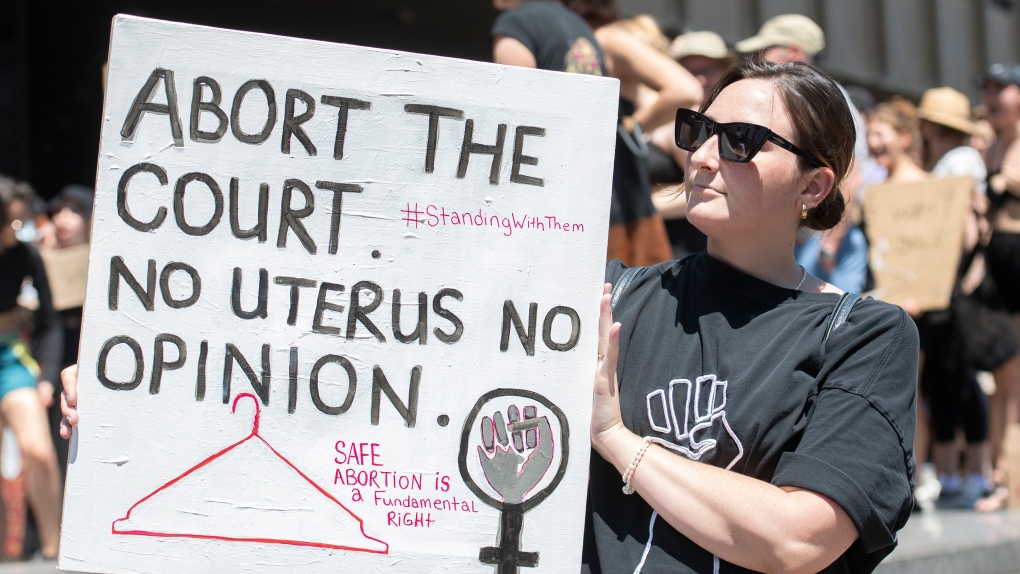 People take part in a protest to denounce the United States Supreme Court's decision to overturn the law that provided the constitutional right to abortion for almost 50 years, in Montreal, Sunday, June 26, 2022. THE CANADIAN PRESS/Graham Hughes

The Supreme Court decision was not surprising, and abortion rights research organization the Guttmacher Institute in the U.S. says that likely 26 of 50 states will ban the procedure. Thirteen states, the institute says, have "trigger laws" that will ban abortions that will go into effect immediately.

"I am outraged by the reversal of Roe vs. Wade, and (am) in solidarity with all American women who see their right to control their bodies violated," Plante wrote on Twitter. "This decision is an unacceptable step backwards."

-- with files from CTV News Montreal.