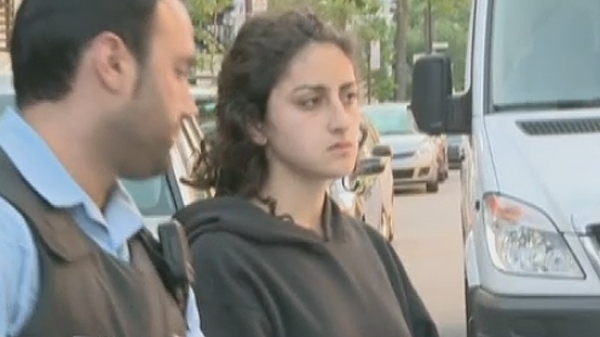 Yalda Machouf-Khadir is placed into a squad car after being arrested for vandalism in spring 2012.

The daughter of Quebec Solidaire MNA Amir Khadir has been acquitted of assaulting a a press photographer.

Yalda Machouf-Khadir and her boyfriend Xavier Philippe-Beauchamp were charged with punching a photographer in 2012.

It happened during one of her numerous court appearances at the height of the student protest movement against tuition hikes.

During the trial, photographer Chantal Poirier testified that she had been covering a court appearance when she found herself surrounded by a gang of protesters, and was punched by Machouf-Khadir.

Philippe-Beauchamp said that neither he nor Machouf-Khadir touched the photographer.

In rendering his judgment, the judge said he doubted Philippe-Beauchamp's version of events but could not find enough evidence to find them guilty beyond a reasonable doubt.

Meanwhile Machouf-Khadir will be back in court in December to be sentenced in three other cases related to the student protests.