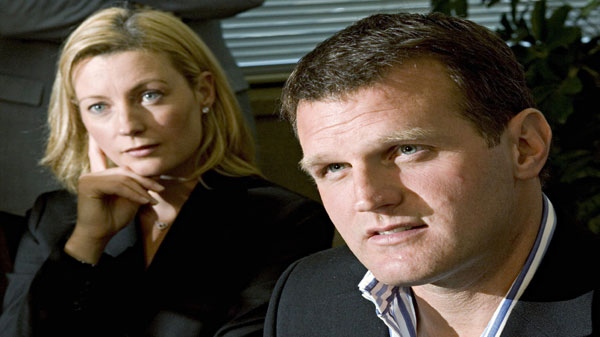 Vincent Damphousse, who played 18 years in the NHL with Toronto, Edmonton, Montreal and San Jose, announces his retirement as his wife Allana listens during a news conference Wednesday, Sept. 7, 2005 in Laval, Que. (CP PHOTO)

Damphousse, 43, did not appear in court Thursday when the charges were laid, and is due back in court in July 13.

Oddly, Damphousse's name did not appear on the docket at the Montreal courthouse on Thursday and it is unclear why an exception was made in his case.

The six charges stem from incidents that took place from 2008 to 2011, court documents show, with the latest occurring as recently as March 29.

However, Damphousse's lawyer told CTV Montreal's Stephane Giroux that on the night of March 29, it was in fact his client who called police to file a complaint of domestic abuse against his wife.

Damphousse and Henderson have been a highly visible couple over the past few years as the official spokespersons of the ALS Society of Quebec.

Last May the two were awarded an Honourary Life Member Award by the ALS Society of Canada to recognize their volunteer contributions to help research for the ailment commonly referred to as Lou Gehrig's Disease.

Damphousse came to the Canadiens in the summer of 1992 in an off-season trade with the Edmonton Oilers in exchange for Shayne Corson, Brent Gilchrist and Vladimir Vujtek.

In 519 games over seven seasons with the Canadiens, Damphousse had 184 goals and 314 assists for 498 points, putting him 23rd on the franchise scoring list.