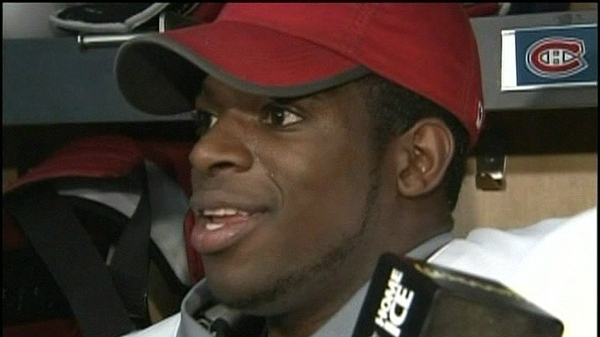 PK Subban talks in the dressing room before his first NHL game in his home town of Toronto (Oct. 7, 2010)

The similarities are so striking, they are extremely difficult to ignore.

P.K. Subban found himself playing with Alex Picard at Canadiens practice Thursday, one day after his late game penalty gave the Tampa Bay Lightning a chance to tie the game with 79 seconds left in regulation before winning it in overtime.

Frankly, the move makes sense, and probably has very little to do with how Subban played Wednesday night. Roman Hamrlik was eventually going to be paired with Jaroslav Spacek, and considering how well Hamrlik played in his first game back from a knee injury that cost him all of training camp, it's a very normal move.

That leaves Subban to play with Picard while the Canadiens await the arrival of Andrei Markov, who I would have to believe will be Subban's regular partner, and he couldn't really ask for a better mentor to guide him through his first full NHL season.

But still, Subban's temporary "demotion," if it can even be called that, made me think back to Jacques Martin's days coaching a young Jason Spezza in Ottawa.

Aside from their draft positioning, Spezza's and Subban's rise to the NHL are practically mirror images. Both Toronto-area natives who endeared themselves to the hockey media long before arriving in the NHL, Spezza and Subban each entered training camp with an NHL spot waiting for them after a year of seasoning in the minors (though Spezza bounced back and forth far more than Subban did last year).

Both entered the league as flashy offensive players who were considered risky in their own end, and both were told by Martin of the importance of learning to play without the puck so they didn't put their teams in bad situations.

I looked back at some newspaper stories from the 2003-04 season to see how the relationship between Spezza and Martin developed, and it was one that was constantly evolving.

Here's an excerpt from a November, 2003 story in the Ottawa Citizen by Ken Warren:

Jacques Martin has sent his message. Jason Spezza says he has heard it loud and clear.

"He sat me down last game, he sat me down last week and hopefully that's as far as it goes," Spezza said. "By no means am I happy with the way I've been playing. There's always the possibility that anybody can be scratched from the lineup, but I hope that doesn't happen."

Martin, tired of Spezza turning over the puck, benched the 20-year-old centre for lengthy stretches during Monday's 2-1 loss to the Buffalo Sabres. Spezza ended up playing only nine minutes 39 seconds, which was less ice time than every forward except Chris Neil.

Martin has since told Spezza to cut down on the flashy moves.

"I have to drive to the net more and use my speed to create more open space and make my moves once I've backed the defencemen up a bit," Spezza said. "It's all part of being a 20-year-old in this league.

"I know you can't try and beat guys standing still. Not even the best guys in this league can do that."

Thursday at practice, Subban was asked whether or not he needs to be more careful with his game. See if you can spot the similarities (By the way, if you haven't already, you can see Subban's comments in The Scrum section of the Habs Hub).

While that quote is not exactly what Spezza said, the spirit of it is essentially the same: resist the temptation to beat the world by yourself and play within the team concept.

That's exactly how Martin responded when asked Thursday about Subban finding the proper balance between offence and defence, something Martin has repeatedly mentioned when asked similar questions since the start of training camp.

"He needs to keep his game simplified," Martin said Thursday. "I think he's much more effective."

Will Martin learn from Spezza experience?

I don't want anyone to think I'm doing this in order to indict Martin or Subban or Spezza or anyone else. Spezza has 476 points in 466 NHL games and is a plus-70 player for his career, so an argument could easily be made that Martin was ultimately good for his development, just as it could be made that Spezza flourished once Martin left.

I'm just pointing out that Martin has been in a very similar situation before, so how he handled it the first time is worth exploring when trying to foresee how he will handle Subban.

Spezza wasn't really benched for any long stretch after that game in Buffalo referenced in the Citizen article in 2003-04 until the very end of the season, sitting out the final two regular season games and the first two and final two games of Ottawa's seven-game first round loss to the Maple Leafs in the playoffs.

Martin had seemingly lost confidence in Spezza's ability to play 5-on-5 and didn't want to risk him having a rookie moment that would cost his team the game, kind of like Subban had Wednesday night.

Martin was fired at the end of that season, with many in the Ottawa media assuming it was largely over his inability to coexist with Spezza, who notched 90 points in 68 games the year after Martin was replaced by Bryan Murray.

I'm not saying that will happen here with Subban, particularly the part about getting fired, but it will be interesting to see what Martin learned from that experience with Spezza and whether or not he will tweak his approach and loosen Subban's leash this time around.