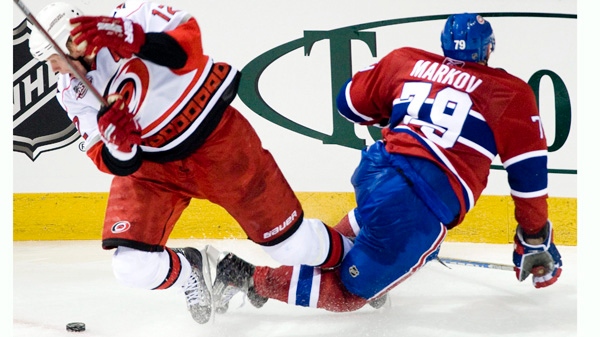 Later this month, Andrei Markov will step on the ice in Brossard to practice with his teammates when the Canadiens open training camp ahead of the 2011-12 season.

It will also mark the official start of the Markov Injury Watch.

Every time the defenceman does a simple skating drill, or engages a teammate in a corner, or changes direction suddenly because he feels like getting a drink at the bench, Markov's ability to complete the manoeuvre unscathed will be noted.

His first pre-season game – whether that's Sept. 20 at home to the Stars, one night later at home to the Sabres or (the smart money's on this one) Sept. 23 on the road in Ottawa – will be as highly-scrutinized an exhibition game as we've seen since, well, since last season.

While the level of intrigue regarding Markov's health risks verging on the ridiculous over the next few weeks, it's only because what he is attempting to do is a pretty rare occurrence.

Going through two reconstructions of the anterior cruciate ligament (ACL) in the same knee is rare for a professional athlete, let alone when the injuries came only six months apart.

In fact, ACL tears in general are relatively rare for hockey players, at least when compared to their football brethren who are forced to pivot much harder and change directions much quicker.

Still, a number of NHL players have undergone reconstructive knee surgeries – notably Markov's teammate Josh Gorges – and a lot of them have come out of it with no recurrence of a knee injury whatsoever.

But none of these players were undergoing their second such operation, so really it bodes well for Gorges more so than Markov.

In looking for an NHL player who has gone through the same repeat ordeal, the one I found was ironically the player so many Canadiens fans wanted to keep instead of Markov because he supposedly represented less of an injury risk – James Wisniewski.

Wisniewski first tore the ACL in his right knee playing for the U.S. in the U-18 world championships in 2002, tore it again in March of 2007, and then again five months later.

But he has not suffered a knee injury since.

However, that's not to say Markov is free and clear. The extent of Wisniewski's injuries may have been less severe, and the surgical procedures that were used on his knee may have been different from the one used by Dr. James Andrews on Markov.

Dr. Brian Cole, the team physician for the Chicago Bulls, estimates the probability of a reconstructed ACL tearing again at between 2.5 and 5 per cent, so the case history is not massive, and Markov's luck was clearly horrendous. In fact, Cole says the second tear is often due to "another random event" and not a failure of the initial surgery.

But there is an extremely similar case to Markov's happening in North Carolina right now, as Panthers linebacker Thomas Davis is attempting to come back from two straight ACL procedures on his right knee. Davis missed all of last season and the second half of the season before because of injury, but was still re-signed to a 5-year, $35.5 million contract extension in July, much like Markov was re-signed to his 3-year, $17.25 million deal at around the same time.

Reports indicate Davis' knee appears to have held up well through camp, and he should be ready to start the upcoming season.

Then there's Purdue All-American basketball player Robbie Hummel, who's attempting to come back from two ACL tears in his right knee in a span of eight months last year, and who appears to be responding well in pre-season workouts thus far.

Meanwhile, the same misfortune recently befell New York Giants cornerback Terrell Thomas, who tore his right ACL last month in an exhibition game. He had previously suffered the same injury on the same knee in college in 2005.

The New York Post spoke to a leading orthopaedic surgeon to discuss Thomas' chances of a return to competitive form.

"Revision surgery is notoriously less successful," Dr. Jonathan Glashow, co-chief of Sports Medicine at Mt. Sinai Medical Center, told The Post. "The success rate (for first-time ACL surgery) isn't what it's said to be: 100 percent. It's probably about 85-88 percent and it's probably about 75 percent with a revision. Revisions clearly do not do as well."

Has Markov's bad luck run out?

While that may sound pretty ominous, it is far from hopeless.

The top-notch Canadiens medical staff gave Pierre Gauthier the green light to sign Markov to his current deal, and Andrews is widely recognized as the best in the business, so those are two factors working in the defenceman's favour as he enters camp.

Markov was scheduled to meet with Andrews for a check-up in August, but with the veil of secrecy that shrouds the Canadiens at all times, who knows if we'll ever find out what was said.

No matter, because it is doubtful Andrews would be able to give Markov any assurance that the knee will not tear again. His evaluation would instead determine whether it is strong enough to begin play.

And if that's the case, it would mean the surgery fell into that 75 per cent success rate.

At that point, Markov's ability to keep that right knee healthy would be just as tenuous or probable as doing the same for his left knee – a situation that is apparently governed by the random glory of luck.

Markov hasn't had much of that over the past few years. But perhaps this is the year his quota of bad luck runs dry.