The Montreal Canadiens won four out of six games against the Vegas Golden Knights, and the Tampa Bay Lightning won four of seven against the New York Islanders meaning the two teams will play each other in the final round of this year's NHL bracket elimination tournament.

The winning team gets a huge communal drinking bowl the players get to share over the summer while a guy with white gloves stands nearby.

Yeah, yeah, yeah, no one thought the Habs would get this far.

Yeah, yeah, yeah, it reminds me of Hoth battle scene in The Empire Strikes Back.

We've all been saying all three of these things since Friday night, so let's look at the series.

It's the ice planet Hoth of the north versus the Degobah swamps of the southern panhandle. 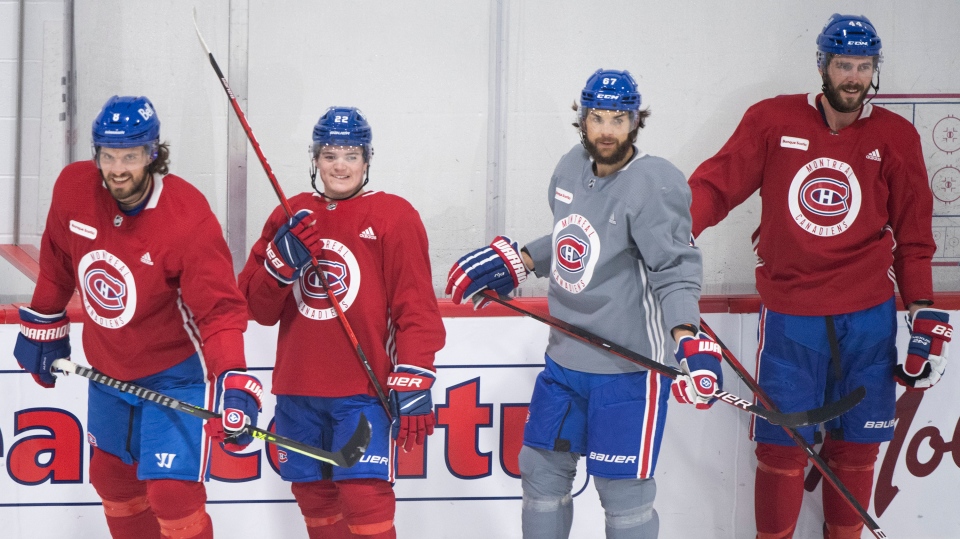 Montreal Canadiens Ben Chiarot (8), Cole Caufield (22) Michael Frolik (67) and Joel Edmundson (44) look on during practice in Brossard, Que., south of Montreal, Sunday, June 27, 2021, ahead of departure to Florida to take on the Tampa Bay Lightning in game one of the Stanley Cup final on Monday June 28. THE CANADIAN PRESS/Graham Hughes

"Well, your highness I guess this is it," said Han Solo to Princess Leia.

The following lines can all be thrown in the loser pile of wasted words along with the President's Trophy: "Hey! At least we got this far," "At least it's given our young guys some playoff experience," and "As long as everyone has fun and gets some exercise, I'm happy."

Tampa can become a true modern dynasty with a series win and join the 16-17 Pittsburgh Penguins as the only team to repeat as champions in the 21st Century.

Lose, and they'll be in the "really good team that won a cup and then lost a cup after a really good regular season" bucket.

It's not a bad thing, but ask any Seattle Seahawks fan and you'll know how much the second one would have meant.

Habs win, and, well, stay indoors if you live on the Island of Montreal and hope for celebrations an Ewok could feel safe at rather than one that results in the smouldering remains of of a once noble city.

Did anyone mention Montreal hasn't won a cup since 1993?

Habs players didn't touch their Clarence S. Campbell Bowl, Tampa's put their paws on the Prince of Wales Trophy, so for all of those who believe in curses and ghosts and goblins and the dark side of the force living in knick-knacks, I guess the edge goes to the Canadiens. 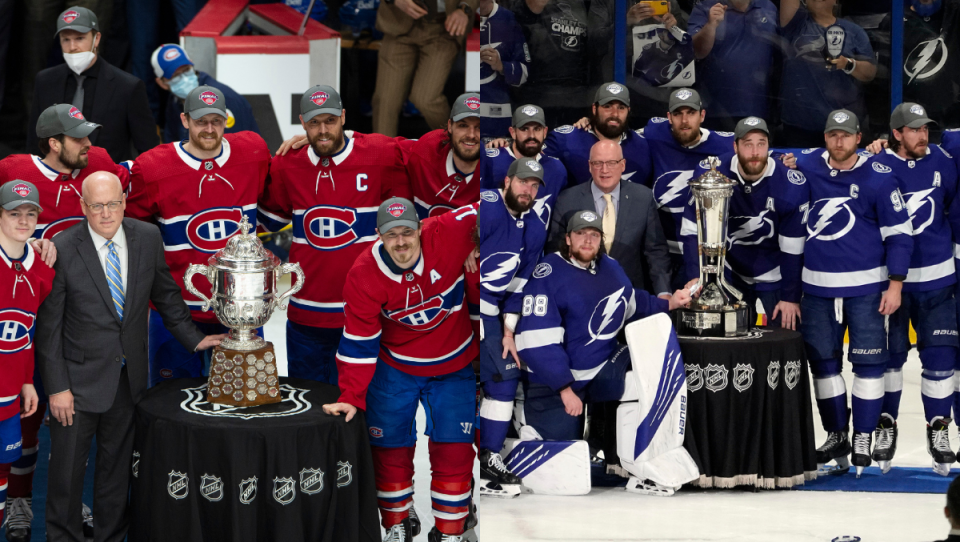 One touched the cup, one did not. Will this mean anything in the end? It remains to be seen. (THE CANADIAN PRESS/Ryan Remiorz/ AP Photo/Chris O'Meara)

"Your Highness, there's nothing more we can do tonight. The shield doors must be closed," said Major Derlin to Princess Leia.

Get ready for some of the finest defence and goaltending in the NHL on both sides of the ice.

The two teams' goalie stats are as similar as Luke and Leia's DNA and will be fascinating to watch: 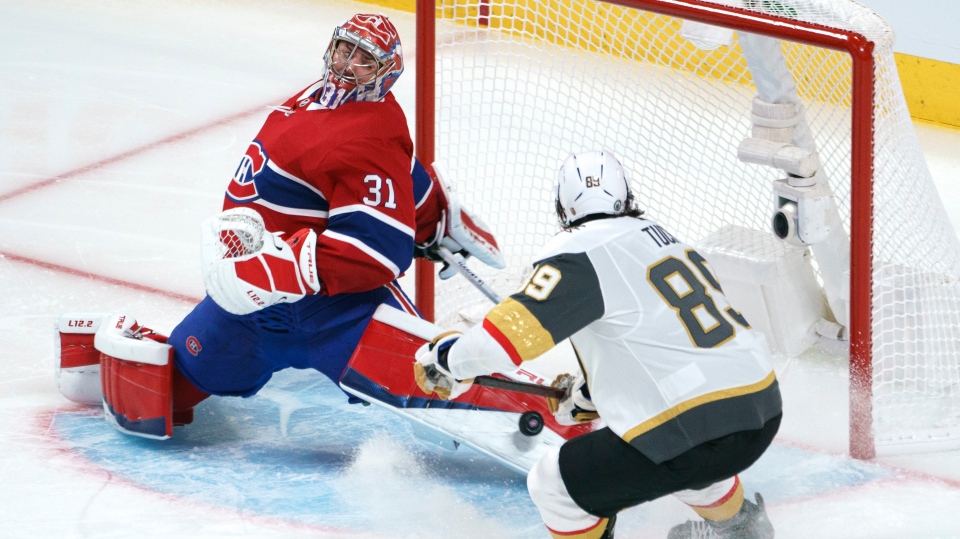 Added to that, both goalies have a fine selection of hardened warriors in front of them.

The first two rounds have shown the value of the Habs' top four defencemen - Shea Weber, Jeff Petry, Ben Chiarot and Joel Edmundson - who all log over 23 minutes a game, but how much of the empire's firepower can they withstand?

Will Jon Merrill, Erik Gustafsson or Alexander Romanov step to a post to defend the rebel base for more than eight minutes?

"Artoo says the chances of survival are seven hundred seventy-five... to one," says Threepio as the blast doors close on the cold Hoth night.

Let's just agree that all bets are off in this NHL finals.

As was stated in another article or two with a sci-fi theme, these are all pros, and there is a ton of talent on both teams. It's clear that the Habs did not play up to their potential for most of the regular season, and now we are witnessing "the firepower of this fully armed and operational battle station."

One team may have AT-AT walkers and the other T-47 airspeeders, but it's really based on a "certain point of view" as to what team has which weapon system.

I'm sure Tampa would love a half dozen young and firey Hablets not to mention the tricolore no. 1 shot stopper, while Montreal fans may want to drive a DeLorean to 88-miles-per-hour to head back to 2017 and undo that Jonathan Drouin-Mikhail Sergachev trade in addition to poaching one or two of the players that pushed the Lightning above the cap.

Quick stat check: Sergachev: plus-1 rating and two assists 18 games played logging around 23 minutes of ice time. Drouin: zeroes across the board.

"Artoo has been known to make mistakes... from time to time."

Vegas is calling Tampa Bay favourites to win, but as Han would say, "Never tell me the odds."

"You have failed me for the last time admiral," Darth Vader to a choking Admiral Ozzel.

Will Captain Steven Stamkos ever take a playoff series by the laser cannons and fire for the exhaust shoot?

He was an injured non-factor last year, and scored just twice against the Islanders in the semifinal.

This playoffs may be the one where he defines his legacy. He has plenty of talent around him to hide behind, but it remains to be seen if Stamkos has his one great series. There's a lot of cheer for over his 13 years, but why do I think a guy named Phil will be more important in the finals.

Note to Tampa Bay Lightning stars: you are about to meet the most dangerous pizza delivery man of all time.

He may not have the swagger of Nick Suzuki, the after burners of Cole Caufield or the straight up star power of Price, but Phillip Danault can look in his wake and see the wrecked forms of Auston Matthews, Blake Wheeler and Mark "Skunked" Stone.

Next up for the Conn Smythe contender (plus Artturi Lehkonen and Brendan Gallagher): Nikita Kucherov, Brayden Point, and Ondrej Palat.

No goals with a man down since Game Four against the Toronto (checks notes) Maple Leafs, and four shorthanded goals in the playoffs.

Montreal's warriors without a hand will need to find their inner Vader or Skywalker (both missing hands) and now take on the league's deadliest of power plays.

Tampa converts almost four out of 10 times they have the advantage (37.7 per cent) in the playoffs.

The Lightning's star destroyer averages 3.2 goals per game while the Habs' fighters are at 2.5.

A key difference between the Lightning and Knights is that, in regular times, Tampa and Montreal are in the same division. Tampa knows most of Montreal's skaters, and will be wise to be ready.