While most bars, living rooms and coffee shops in Montreal were packed Sunday with Canada fans, the Saint-Nicholas Tavelic Catholic Church in the Town of Montreal was awash in checkers.

Marko Piperković was among the over 100 Croatian Montrealers decked out in his country's iconic colours, cheering on Mateo Kovacic, Marcelo Brozovic, and the country's talisman and arguably the best Croatian player ever: Luka Modric.

And for those that don't know, Croatian fans are the real deal.

"We're pretty known for our fans, not only internationally when it comes to the national team, but also when it comes to the Croatian clubs - Dynamo Zagreb, Hajduk Split - their fans are known worldwide," said Piperković. "They're pretty intense. I've been looking at some videos in Qatar, and we've been pretty loud since we've come there."

In that crowd of red-and-white checkers, most, Piperković said were wearing the no. 10 on the back.

"It's mostly Modric that everybody wears," "He's the legend. When you say Modric, automatically, it's Croatia. He's the best we've ever had. He brought us to the finals, that's the best result we've ever had in history; Ballon d'Or, we never had a Ballon d'Or winner, and I don't even want to start with Real Madrid and everything he's done."

Across the Riviere-des-Prairies in Laval, a crowd of kids and parents from the Saint-Laurent Soccer Club were proudly in red to support of the Canadian player who once ran the same pitch in his youth: CF Montreal midfielder Ismael Kone. 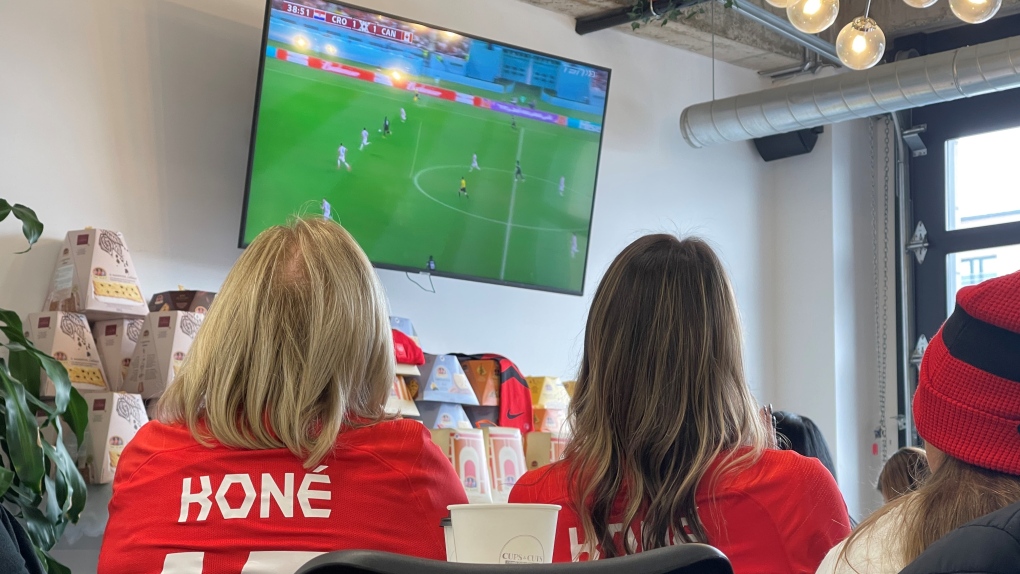 Fans of Canada and CF Montreal midfielder Ismael Kone gather with those from the club in Montreal he played with as a boy. (Luca Caruso-Moro/CTV News)

"You said you wanted to do this for your Mom! Now you have to do it for Saint-Laurent, for Montreal, for Quebec and especially for Team Canada!" DeSousa wrote on Facebook. "Saint Laurent is proud of you, and cheering for you and the whole team."

Canadian Alphonso Davies scored early for Canada and gave the country its first-ever World Cup goal, but Croatia stormed back to win 4-1 and eliminate the Canucks from the tournament.

Canadian coach John Herdman amped up the drama while talking to his players after the team was blanked by Belgium 1-0 on matchday one.

Canada coach John Herdman on what he told his players after their defeat to Belgium 😤 pic.twitter.com/rbcsk2batz

"The Croatian national team deserves respect from everyone. We've earned it with our performances, behaviour and results," he said. "Not only now, but throughout our history. As we show respect to everyone, we expect them to treat us the same."

Croatian fans know that this may be the final hurrah for some of the team's best players but that, though old, their team has some serious talent.

"We have a great team, but there's a few players getting older - Luka Modric, 37 years old; Ivan Perisic, 33 - but at the same time, there's a good mix of the newer generation that's making their way through like (Josko) Gvardiol on defence and Nikola Vlasic on the right side," said Piperković.

MOROCCO'S WIN MEANS CANADA IS OUT

With Morocco's upset and dominant 2-0 win over Belgium Sunday morning, the pressure was on both Canada and Croatia.

With Morocco and Croatia now top of the group with four points and Belgium in second with three, Canada's final game will be only for pride, as the best the team can do is finish with three points when it plays Morocco on Thursday.

A paramedic signing off for duty for the last time got choked up and teary-eyed during his final radio call to colleagues.

Hundreds of customers who scan QR codes for restaurant menus across Canada are being surprised by secret menus instead, revealing the hidden costs behind the food they eat.

One of Saskatchewan’s oldest hockey rinks has garnered national attention for its unique features and unusual design.

The U.S. is tracking a suspected Chinese surveillance balloon that has been spotted over U.S. airspace for a couple days, but the Pentagon decided not to shoot it down due to risks of harm for people on the ground, officials said Thursday.