Bianca Hayes had completed most of what would be a Guinness World Record bike ride across Canada when it was halted dramatically by a crash.

A motorbiker saw her too late and crashed, sending his bike straight at her on its side. The motorbike slid under Hayes' bike, clipping her foot and ending her ride two days short of the record.

After telling her story to CTV News Vancouver, Hayes spoke about the Quebec portion of her journey and the unique joy of almost finishing the ride, along with the realities of driving in the province.

"Reaching Quebec was huge," said Hayes. "Crossing that border is massive. When you're going through the Western provinces is great because they're a little bit smaller, so you get a bit of momentum going, you're knocking about like a day, day-and-a-half, and you're feeling pretty good about yourself, and then you get to Ontario, which takes forever." 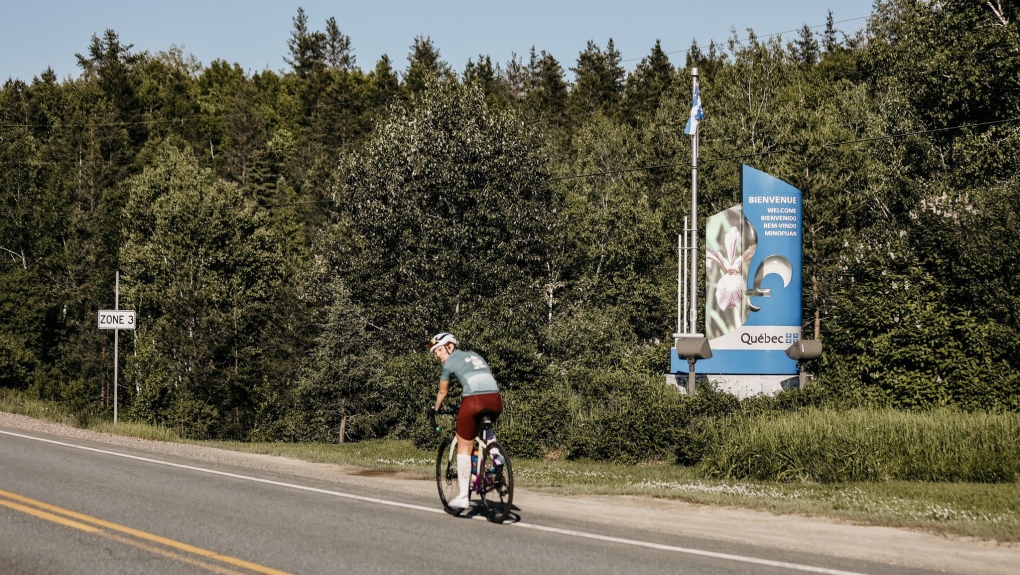 Bianca Hayes said entering Quebec after crossing the western provinces was a point of joy, as she knew the finish was in sight. SOURCE: The Coconut Creative

Just before her crash outside of Trois-Rivières, Hayes hit what many cyclists in Quebec are very familiar with: heavy headwinds.

"I just started thinking like, 'Oh, no, if it starts getting really heavy, then I'm gonna get so slow; I'm not going to make it,'" she said. "It feels like you're not moving at all. It is the most frustrating feeling in the world and just the mental game of trying to stay positive as you're battling through that as well because you have to. It doesn't matter."

She pushed through, however, took a break in the RV accompanying her, slammed a Red Bull and got ready to get back on her ride after the comforting news that tailwinds were approaching and she could get some speed. 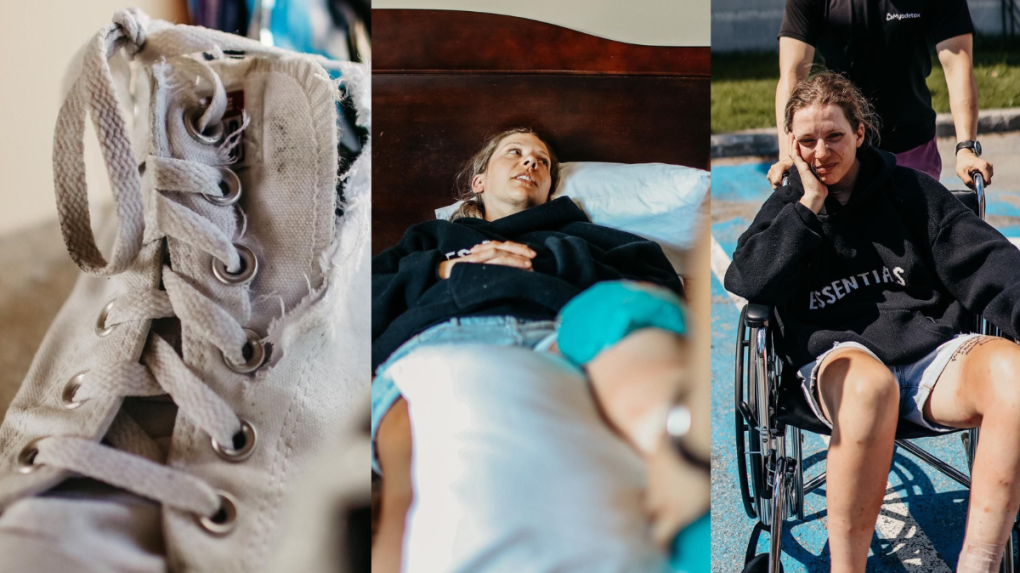 Two days before breaking the Guinness Record for cross-country riding by a female, Bianca Hayes was clipped by a motorbike and her ride was ended. SOURCE: The Coconut Creative

Travelling across the country by bike gives a cyclist a unique perspective on one part of each province's infrastructure: the roads. In Quebec, roads have a particular reputation as do the drivers that traverse them.

Hayes said drivers were respectful and friendly in B.C., Saskatchewan, and Manitoba and not so much in Alberta.

"They're not very happy that you're on the road," she said. "Sometimes you just get honks, and you're like I'm three feet over onto the shoulder. I'm not bothering you at all." 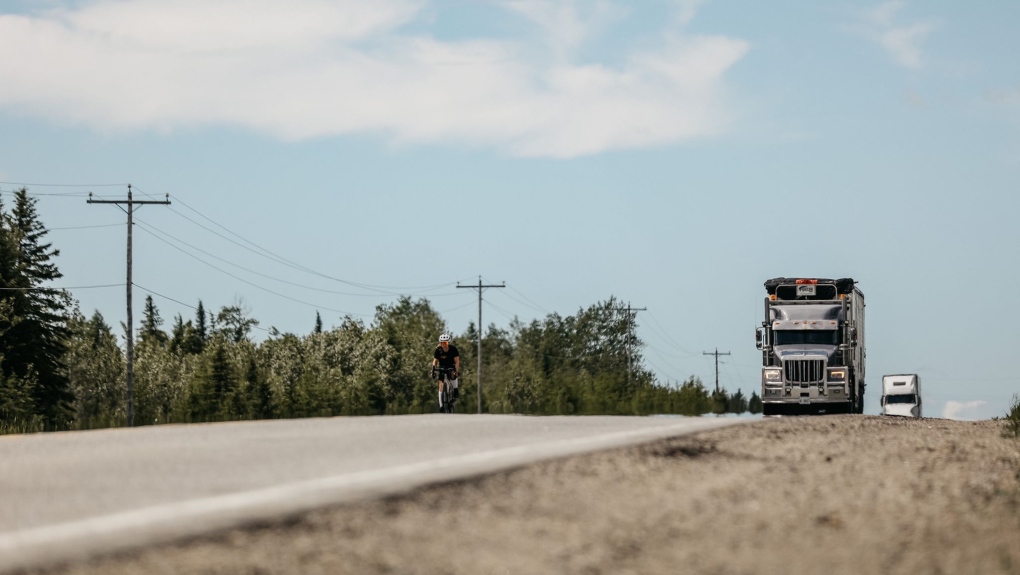 Bianca Hayes said drivers in Quebec posed some of the most difficult to navigate beside as they often sped by at high speeds without giving space to the cyclist. SOURCE: The Coconut Creative

Ontario, she said, was hit-or-miss, and then came Quebec.

"I never felt really in danger until some parts of Montreal," she said. "The roads were so pockmarked and so many potholes that you're trying to avoid on the shoulder, and so you end up having to sort of jump into the road for a little bit."

She said at some points, she ran into the troubling combination of bad roads and aggressive drivers travelling at high speeds without concern for a cyclist on the side of the road.

"That was a really bad combination and led to some very stressful moments for me," she said. "It was just the speeds that were very, very surprising, feeling people pass very quickly. I guess drivers in Montreal are so comfortable with road bikes being on the road that they don't give you as much space... And maybe people on bikes are a little bit more comfortable with the drivers on the road, but we definitely felt a little more dangerous in Montreal than anywhere else."

The emotional roller coaster continues for Hayes, who knows she was two days from breaking the Guinness record but also knows she was doing the ride for a cause, and she survived the accident with relatively minor injuries.

"The athlete in me is very, very frustrated right now and very angry, and the rational side of me has to sort of step in and go, 'but we're so lucky.' I'm lucky that I'm able to sit here. I'm still able to talk about my story," she said. "At the end, this was all for ovarian cancer, it was all as a fundraiser, it's all to raise awareness and, and try to generate money for a cause that is very important to me. So I'm still here to be able to do that. And, and I'm so lucky. I'm so grateful for that."

The ride was inspired by her 32-year-old sister Katrina, who died of ovarian cancer in 2018.

Hayes continues to raise money on her website with the goal of donating $1 million to Ovarian Cancer Canada and the BC Cancer Foundation.

Actor Anne Heche has died after suffering a brain injury following a car crash last week, according to her family. She was 53.

Salman Rushdie, the author whose writing led to death threats from Iran in the 1980s, was attacked and apparently stabbed in the neck Friday by a man who rushed the stage as he was about to give a lecture in western New York.

300,000 Canadians at 'severe' or 'moderate' risk of gambling problems

While problem gambling affects a minority of the Canadian population, more than 300,000 are at “severe” or “moderate risk” for gambling-related problems, according to a Statistics Canada study of gambling behaviour.

A Quebec Superior Court judge has temporarily suspended two articles of the province's new language law, saying they could prevent some English-speaking organizations from accessing justice through the courts.

A federal judge was to decide as soon as Friday whether to grant the Department of Justice's request to unseal the warrant that authorized the FBI to search former U.S. President Donald Trump's Florida estate. Attorney General Merrick Garland declared there was 'substantial public interest in this matter,' and Trump backed the warrant's 'immediate' release.