COVID in the eyes of the beholder: Montreal research helps development of better detection method 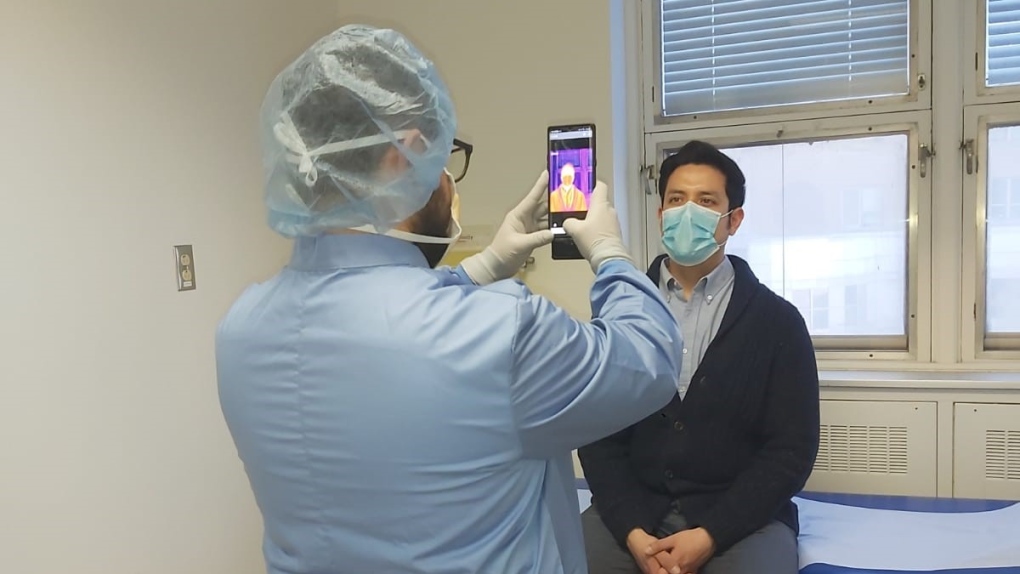 Montreal researcher Jose Ramirez-GarciaLuna is part of a research team looking into the possibility of using eye temperature, rather than forehead temperature, to detect COVID-19. (Photo: CTV Montreal/Cindy Sherwin)

MONTREAL -- By now, many people have grown accustomed to the idea they might be stopped at the entrance to a hospital, store or airport while a security agent takes their temperature.

Usually, a handheld, infrared temperature reader is pointed at the forehead, and unless the screen registers a fever, the person is granted access, even though, according to a McGill University researcher, the process has “major flaws.

“Forehead measurements are just not accurate,” said Dr. Jose L. Ramirez-GarciaLuna, a postdoctoral fellow in the department of experimental surgery.

So Ramirez-GarciaLuna and his colleagues at McGill’s faculty of medicine collaborated with a team in Mexico to to evaluate a different method to help identify people who have COVID-19 but who have minimal symptoms.

The results of the small study, recently published in the European Journal of Clinical Investigation, suggest that using infrared thermal imaging to register a person’s eye temperature could more accurately determine who has the disease and who doesn’t, the researcher said in an interview.

“From the pilot project, I’m sure it has potential to be a screening method,” Ramirez-Garcia Luna said, but “I think there’s still a lot of research to be done before we roll it out.”

Although the doctor said using traditional fever-screening forehead thermometers is better than no screening at all, he’s concluded they have limited value for a few reasons.

Unless a thermometer is placed in the armpit, mouth or eardrum “what’s being measured is the skin temperature, not the body’s core temperature,” the researcher explained.

That’s significant, because while the core temperature of all humans is quite stable at around 37C, the temperature of the skin can vary widely from person to person and fluctuates depending on the weather, physical activity and hormone levels, among other factors.

The second flaw stems from the premise that fever is a good indicator of COVID-19, “but not all people with COVID present with fever, and even if they have fever, they don’t have it all the time," the research fellow said.

Furthermore, some “commercial thermometers might not be sensitive enough to detect small changes in temperature.”

THE EYES - A WINDOW INTO THE INFECTIOUS PROCESS

The study, carried out in Mexico, enrolled 60 patients, whose faces were scanned with a thermal imaging camera that captured any heat they were emitting that was produced by blood flow or inflamation.

The subjects were separated into three groups, with the first group made up of hospital workers who were regularly tested and were COVID-free.

Another group consisted of people who had mild symptoms after being in close contact with someone who was infected.

All those people were divided into either COVID-positive or COVID-negative groups, depending on the results of their PCR test.

“If you take an image of someone who is sick, you can pick up where there’s inflammation going on," the research fellow said, explaining that in particular with “COVID there’s a lot of evidence showing that the virus goes to the eyes and to specific tissues within the eyes.”

As the researchers expected, the eyes of the people with the disease lit up a hot red in the infrared images captured; a combination of inflamed blood vessels and the response triggered by the virus.

“We found that a difference equal to or above 0.55C between the temperature distribution of the forehead and the eyes, is very suggestive of COVID infection,” with about 80 per cent accuracy, Ramirez-Garcia Luna said.

Thermal face and eye scans to detect active COVID-19 infections could be the way of the future at metro station entrances, grocery stores or wherever there are large gatherings, the physician said.

The portable devices themselves are inexpensive and can be used easily by connecting them to a mobile device.

However the researcher emphasized that more evidence is needed to confirm the results and also on how to control for different environments, and different mobile cameras.

Privacy concerns about taking images of people’s faces would also have to be addressed as they have been at airports with other types of scans.

But, he said, there will eventually be other health crises and it is critical he thinks, “to use the lessons we learned,” during this pandemic “to find innovative ways to harness technology,” to help us through the next one.