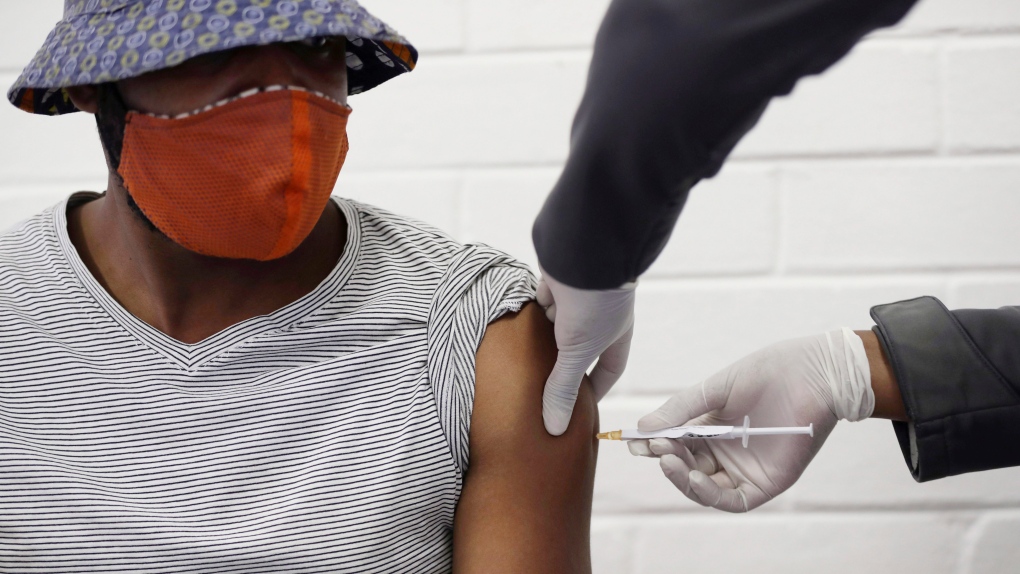 In this Wednesday, June 24, 2020 file photo, a volunteer receives a COVID-19 test vaccine injection developed at the University of Oxford in Britain, at the Chris Hani Baragwanath hospital in Soweto, Johannesburg, South Africa. (AP Photo/Siphiwe Sibeko)

MONTREAL -- Experts in vaccine development think it’s unlikely a vaccine for COVID-19 will become available to the general public before fall 2021, a new survey shows.

Twenty-eight academics working in vaccinology were asked by a team from McGill University to make forecasts about three milestones in the development of a vaccine for the disease.

The experts' opinions contrast statements made by U.S. President Donald Trump during Tuesday night's presidential debate, when he said he disagrees with medical advisors who don't expect a vaccine to become available before 2021.

Trump claimed the issue has become "political" and that the U.S. could have a vaccine before election day on Nov. 3.

"Experts in our survey offered forecasts on vaccine development that were generally less optimistic than the timeline of early 2021 offered by U.S. public officials," said Jonathan Kimmelman, a McGill professor and director of the Biomedical Ethics Unit at the school and the senior author of the paper. "In general they seem to believe that a publicly available vaccine next summer is the best-case scenario with the possibility that it may take until 2022."

The results made public on Thursday include answers from both Canadian and American academics with an average of 25 years of experience in vaccinology. The survey was carried out at the end of June, when the first wave of COVID-19 began to subside in Canada.

The experts' answers were slightly more optimistic when it comes to vaccine availability for those who are at highest risk for the disease, however. For that group, they believe a vaccine could be available as early as February 2021, but their best guess is March or April. They think the latest, in this case, would be December 2021.

About a third of the experts surveyed think there will be two main setbacks in the quest for a vaccine: that the first version deployed across Canada and the U.S. will receive an FDA warning about severe and potentially life-threatening side effects, or that first large field trial will report that it is simply ineffective.

Experts expect a field study with at least 5,000 participants to take place around March 2021, with the possibility of an earlier date in December of this year. Their latest guess is December 2021.

"Our study finds that experts are largely in agreement about the timeline for a SARS-CoV-2 vaccine," said Stephen Broomell, an associate professor at the Dietrich College of Humanities and Social Sciences, at Carnegie Mellon University. "While this does not track with many overly optimistic government projections, it reflects a belief that researchers are indeed on a faster pace to development compared to previous vaccines."