MONTREAL -- Final exams are around the corner at universities in Montreal, and some students at Concordia University have reacted with alarm that some teachers have sent messages saying they will hold proctored exams via students’ computers using a webcam.

Concordia’s exam period is April 16 to May 3, and the school released a statement Friday saying that some exams may be proctored online since the school is closed as a result of the COVID-19 pandemic, and gathering in groups is forbidden.

“For those courses that required a traditional closed-book final exam, we have adopted examination and proctoring software that is user-friendly, secure and the least invasive we could find,” reads a statement from interim provost Anne Whitelaw. “We recognize that this new format is unfamiliar, and that for a number of you it will be a challenge to find a quiet unencumbered space in which to write the exam.”

Concordia spokesperson Vannina Maestracci said proctored exams will be for a very small percentage of courses, and that the administration is advising that professors find alternatives.

Concordia offered options for students who feel they are not able to complete online exams. 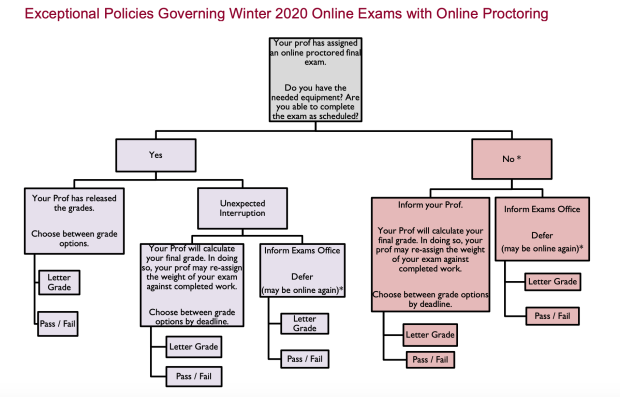 More than 7,800 people have signed a petition titled “Stop Concordia University from using proctored webcam exams” opposed to the idea.

“This is wrong,” reads the petition. “Other universities including McGill have not put this in place and it is ridiculous for Concordia to be considering this while there is the COVID-19 pandemic going on.”

Several students contacted CTV News troubled at having to take an exam via webcam from home.

A political science student, who wished to remain annonymous, received a message informing her that her final would be online and required the student to have a computer with webcam, microphone and Chrome browser with the Proctorio extension along with a reliable Internet connection.

The overview of the program says Proctorio “works exclusively within the browser and does not have access to your local machine.” It captures the content of the users’ screen “using a technique that intentionally obfuscates sensitive information.”

The student has signed the petition, and is uncomfortable with the university accessing students’ computers.

“It’s extremely invasive,” they said. “It’s not that we don’t want to evaluated. It’s not that we don’t want to do the work. It’s just that it’s unrealistic that in the environment of a pandemic, that you expect students to perform the same way, to have memorized everything and to be able to focus. It’s unrealistic, in this day and age to expect people to set up a webcam and sit there for three hours with someone watching them. That’s creepy.”

The student referenced McGill University’s policy as an example of a less invasive exam format.

“The format of final exams has changed from a 3-hour in person sit down exam to either a take-home exam or an open-book exam (timed),” reads McGill’s exam site.

Maestracci said the administration understands the difficulties students are under currently, and that the faculty is working to make the exam period as uncomplicated as possible.

“We recognize that conditions that students may be facing are difficult and that’s obviously something we’d take into account,” said Maestracci. “We’re really trying to be aware of all the different cases.”