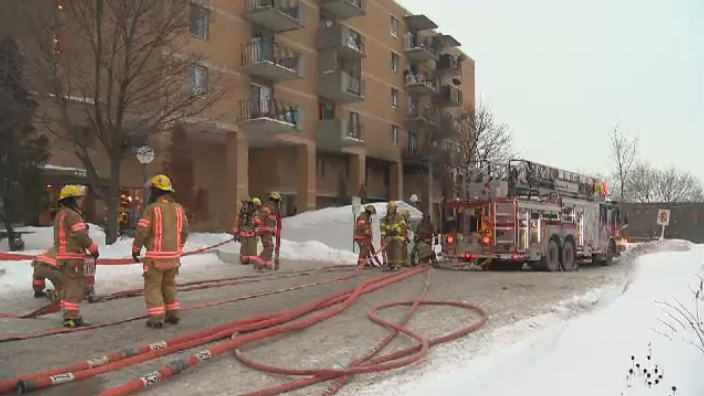 A fire broke out on the second floor of this six-storey building in Cote des Neiges, which belongs to the Office municipal d'habitation de Montreal, Tuesday afternoon.

The blaze started on the second floor of the six-storey building on Isabella Ave., which belongs to the Office municipal d'habitation de Montreal, around 3:45 p.m. By 6 p.m. the fire was under control, according to Luc Robillard, operations chief for the Montreal fire department.

About 100 people had to be evacuated, many of whom have limited mobility and had to be brought out of the building one by one. Those people were never in immediate danger, Robillard said.

Among the five people brought to hospital was one person who was in the unit were the fire started. That person will be treated for burns, while the rest are being seen for smoke inhalation.

There were 90 firefighters and 35 vehicles at the scene to help douse the flames.

Firefighters were not able to discern how the fire started. As is standard protocol, since the cause of the fire isn’t immediately obvious, the Montreal police's arson squad has now taken over the investigation.