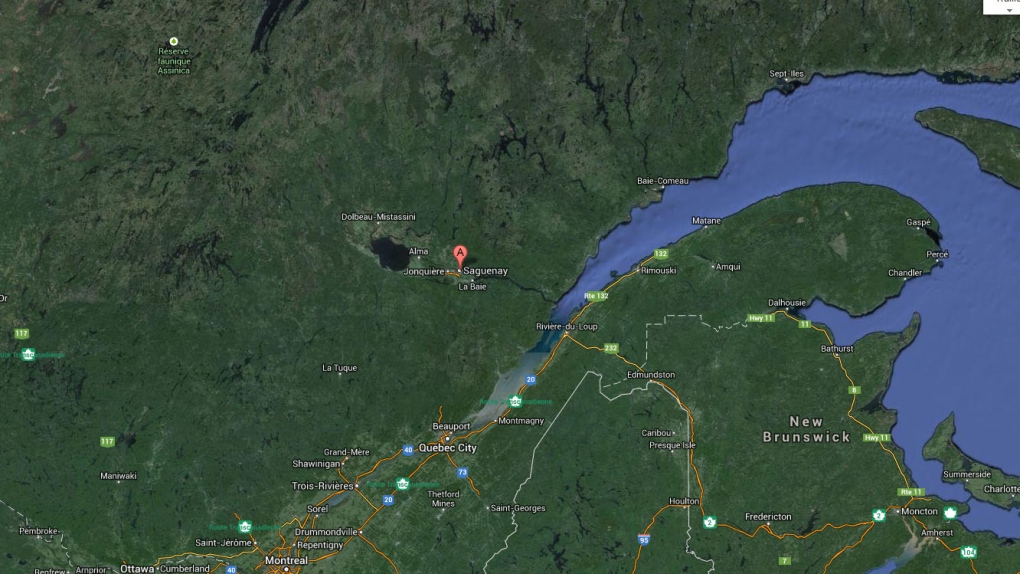 Saguenay, Que. is pictured in this map. (Google)

The family of a 93-year-old Quebec woman who died after spending about 36 hours inert on her balcony at a seniors' residence wants to see better surveillance for the elderly in such establishments.

Marie-Rose Gauthier lived in an autonomous living apartment at a seniors' home in Saguenay, Que., and her family believes she fell on the eve of the June 24 Fete Nationale holiday and was unable to get up.

She was discovered on June 25, dehydrated and suffering from hypothermia and died three days later in hospital on June 28.

Denise Ouellet, Gauthier's daughter, said her mother had all her faculties, but was prone to falls and due to her knees had difficulty getting up. She wasn't wearing her bracelet alarm to alert anyone she'd fallen.

Ouellet and her brother had gone to see their mother earlier that Sunday afternoon and when her brother called to check on her later that evening, their mother was on the balcony enjoying a drink before dinner.

"She'd described to me what she would be eating for supper and when they found her on the Tuesday morning, the meal was on the counter so she didn't come in to eat," Ouellet said. "My mother fell on her balcony -- she fell a lot."

Typically her mother wore a bracelet that alerted staff to any problems, Ouellet said.

"Mom wore her bracelet -- but on the day of the 23rd, she wasn't wearing it," Ouellet said. "It was on her night table."

Given several falls and some downturns in her health, Ouellet said she and her siblings had been concerned about their mother's safety and arranged for her to move into a supervised unit, but she refused.

Her daughter said that Gauthier had also cancelled a free service in the past month that had volunteers checking in twice daily over the phone, a cancellation they only discovered after the fact.

Ouellet said she'd like to see new measures to avoid anyone else ending up in a similar situation. Those include a better definition of autonomy in leases, as it can change drastically from year to year.

She also advocated for increased security at seniors' residences, noting a little knock on the door might have meant a different fate for her mother.

"A little tock tock on the door, 'Madame Gauthier, how are you doing today?'," Ouellet said. "What we're saying that if there was a person who knocked during the day and at night -- a human presence -- at least she wouldn't have spent a full day and two nights on the balcony."

The issue of seniors' security has been front and centre, and last month a coroner ruled the hypothermia death of a 93-year-old woman last January was accidental, but video footage of the woman trying to re-enter the luxury seniors' residence from the enclosed courtyard where she died shows it was preventable as well.

Helene Rowley Hotte Duceppe, mother of former Bloc Quebecois leader Gilles Duceppe, died of hypothermia on Jan. 20, on a bitterly cold, snowy morning when she was lured outside by what turned out to be a false fire alarm and became trapped.

Seniors' Minister Marguerite Blais is reviewing the rules surrounding seniors' homes, but the province wouldn't comment on the death until the coroner's probe is complete.

But a provincial seniors' rights group said the solution may be for seniors to take responsibility for their own safety and take advantage of available tracking technology instead of asking the government to legislate.

"It's a situation that's sad, that could have been avoided without adding a layer of legislation," said Patrice St-Pierre, general manager of the local chapter of FADOQ in the region, a seniors' rights organization. "She wasn't wearing a bracelet and refused to move to an apartment that would have provided more assistance."

St-Pierre said he believes the responsibility lies in seniors and their families setting up networks with neighbours and others to stay connected.

"It's the kind of thing that could have happened in a private home without any surveillance," St-Pierre added. "That's why it's important for people to develop links with relatives and neighbours to check in with them."

For Ouellet, she said the responsibility can't only fall on family or the seniors themselves. She said the matter merits discussion and she'll be interested to see the coroner's recommendations.

"If this happened, what more can we do?" Ouellet said. "It's a question we need to ask."