Indigenous leaders from Canada, Brazil and Indonesia say their voices are not being heard by delegates and lawmakers at COP15. They’ve repeatedly spoken out since the conference began to say funding is not enough, and to demand a greater role in conservation efforts.

"They want to pick and choose what pieces of us to include,” said Ta'kaiya Blaney of the Tla'amin Nationon the west coast. “They want Indigenous knowledge to fix colonial problems, but refuse to end colonial warfare.”

She was among the Indigenous activists that staged a protest Tuesday during Prime Minister Justin Trudeau's speech to the conference.

Demonstrators held up a large banner which read "to save biodiversity ... stop invading our lands." A procession of singers carried hand drums and sang as they walked out of the room -- among the lyrics: "Canada is on stolen land." 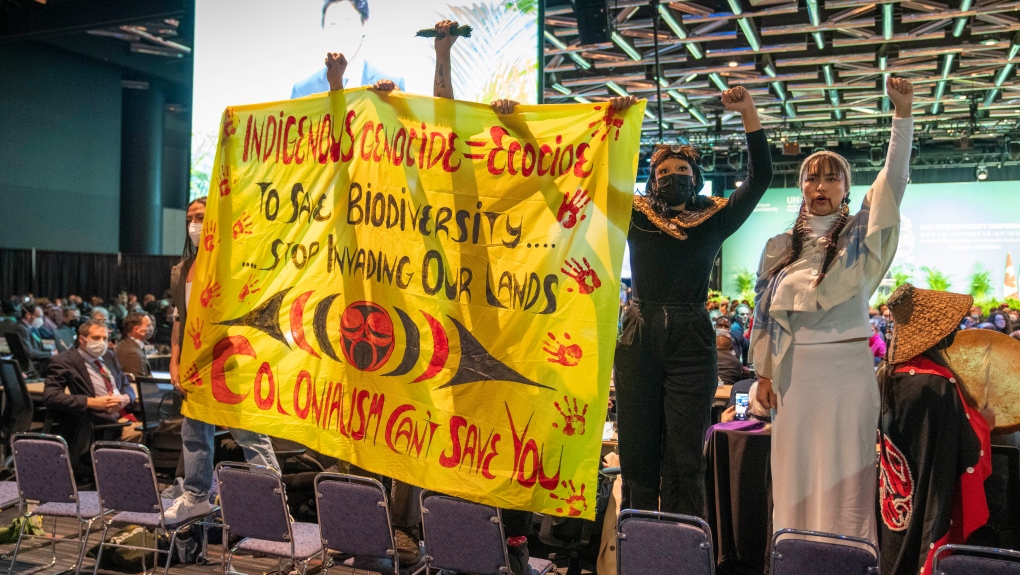 Protesters interrupt a speech by Prime Minister Justin Trudeau during the opening ceremony of the COP15 UN conference on biodiversity in Montreal, on Tuesday, December 6, 2022. THE CANADIAN PRESS/Paul Chiasson

Among the funded projects is a marine conservation and sustainability initiative in the Great Bear Sea along British Columbia's north coast, championed by 17 First Nations in the area.

There will be protections for boreal forests, rivers, and lands across the Northwest Territories spearheaded by 30 Indigenous governments.

Funds will also go to an Inuit-led project involving waters and land in Nunavut's Qikiqtani region and to a project in western James Bay to protect the world's third largest wetland, led by the Omushkego Cree in Ontario.

The funding was one of four targets set by the Canadian government.

The others include reaching a deal to halt and reverse biodiversity loss by 2030, to protect at least 30 per cent of lands and oceans within the same period, to fund developing nations adequately to allow them to reach the same goals, and to include the participation by Indigenous people.

Canadian Environment Minister Steven Guilbault said Friday he had hoped negotiations to meet those other targets would have gone faster.

"Things never go as fast as I would like," he said. 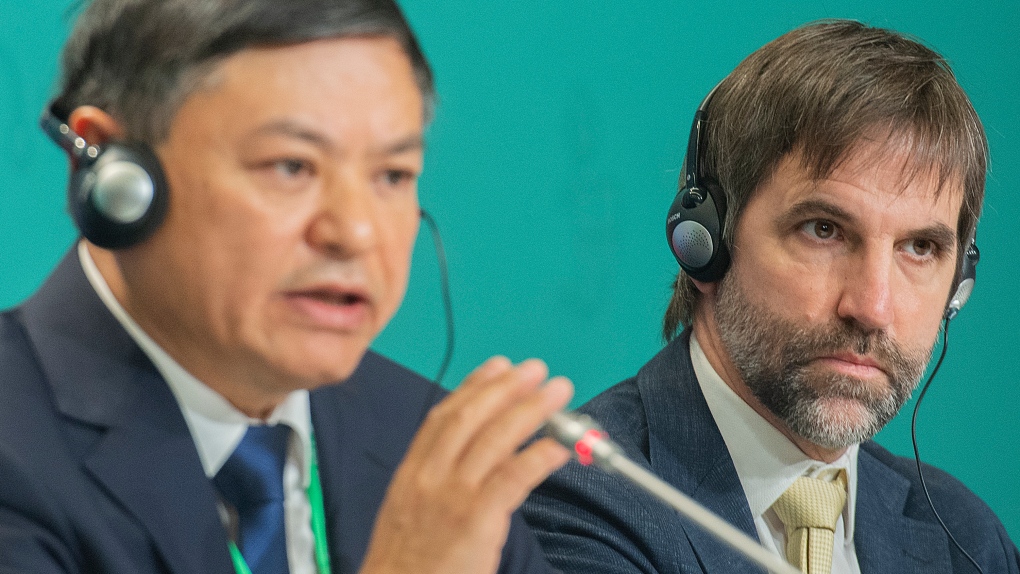 Steven Guilbeault, Minister of Environment and Climate Change, Canada, right, looks on as Huang Runqiu, President, COP15 and Minister of Ecology and Environment of China, speaks during the opening news conference of COP15, the UN Biodiversity Conference, in Montreal, Tuesday, December 6, 2022. THE CANADIAN PRESS/Graham Hughes

Without Indigenous participation, the government’s projects are at risk of falling flat, said Dinaman Tuxa, from the Articulation of Indigenous Peoples of Brazil.

“Funds alone won't guarantee success,” he said. “Indigenous peoples need to be leading the process from start to finish.”

In Quebec, Ronald Brazeau from Lac-Simon First Nation says greed has gotten in the way of conservation.

"Don't forget, you guys, we only have one land; one earth,” he said.

“I don't know if people are willing to go live on the moon. I'll pay for you guys to go move there ... if its that."

Outside the conference, hundreds of demonstrators filed through Montreal the voice their opposition to COP15 and climate change concerns.

“What [the delegates] want to do is to discuss together. They want to meet behind closed doors,” said Simon-Pierre Lauzon from the Alternative Socialiste group, which was present during Friday’s march.

“They want to tell the population that ‘everything is going to be okay’, that they've ‘got it all figured out’,” he said.

“But we know now, after 20 years of government after government not actually reaching their own goals, that we're going to need to do something else if we want to solve anything.”

The march began at 3 p.m. Phillip’s Square downtown and wrapped up before 6 p.m.

Since the beginning of the conference, demonstrations have been mostly peaceful, though police say protestors smashed the windows of a financial building at Saint-Hubert and Cherrier streets.

Police also said street cones were thrown around, stickers were put on vehicles, and at one point, fireworks were set off. There have been no arrests.

-- Published with files from CTV's Matt Grillo and The Canadian Press

Five people were injured after a Laval city bus crashed into a daycare Wednesday morning, according to Urgences Sante. The incident took place at the Garderie éducative Sainte-Rose on Dufferin Terrace in Laval's Sainte-Rose district. At least one person was seriously injured.

Inflation has eroded purchasing power for many Canadians, but the experience with rapidly rising prices has been far from uniform.

With the hope of finding survivors fading, stretched rescue teams in Turkiye and Syria searched Wednesday for signs of life in the rubble of thousands of buildings toppled by a catastrophic earthquake. The confirmed death toll from the world's deadliest quake in more than a decade passed 11,000.

This is what political scientists make of that handshake between Alberta Premier Danielle Smith and Prime Minister Justin Trudeau.