Despite making momentous gains in the popular vote in his campaign, Conservative Party of Quebec (CPQ) leader Eric Duhaime was unable to win a seat in the Chauveau riding.

He told supporters that he plans to stay on as party leader, calling the last five weeks a "David and Goliath" campaign.

"I'll need you even more in the next four years," he said to the crowd at the Conservative headquarters, before moving to congratulate his opponents, with a promise to run again next election. "Prepare yourself, because in four years, it will be much tougher."

Duhaime had hoped to pick up the seat from CAQ incumbent Sylvain Levesque, who obtained enough votes to deny him. 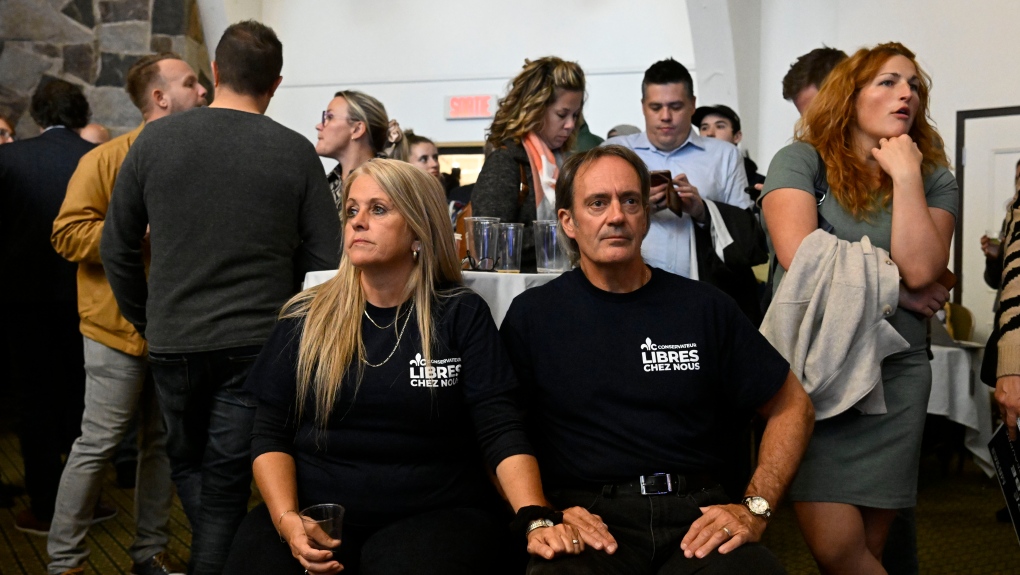 Supporters react as they watch the results at the Conservative election night headquarters on Monday, October 3, 2022 in Lac-Delage, Quebec. THE CANADIAN PRESS / Bernard Brault

It was an undoubtedly disappointing night for Conservative candidates who, despite polling at second place in terms of popular support during the campaign, were unable to win a single seat.

The CAQ also took Beauce-North and Beauce-South, the other two ridings polls suggested could go to the Conservatives.

It's a result Duhaime forecasted well before any ballots were cast. He had previously called it the political "distortion of the century" -- a condemnation renewed again during his closing speech Monday.

He maintained, however, that the campaign was just phase one of his plans for the party, or as he put it, the first period.

He also took credit for publicizing his party's desire to expand the private health sector and to develop Quebec hydrocarbon infrastructure.

Elon Musk's Neuralink, a medical device company, is under federal investigation for potential animal-welfare violations amid internal staff complaints that its animal testing is being rushed, causing needless suffering and deaths, according to documents reviewed by Reuters and sources familiar with the investigation and company operations.

Dozens killed, including children, as mudslide swallows bus on highway in Colombia

A mudslide unleashed by torrential rain buried a bus and affected two other vehicles on a highway central Colombia, killing at least 34 people, authorities said Monday.

'The kind of leader I am': Smith accepts sovereignty act amendments from UCP caucus

Alberta's premier says she is OK with her caucus making changes to the sovereignty act bill she introduced last week, while the NDP argued it would be better to scrap it altogether.

Permanent residents can now apply to join the Canadian Armed Forces, regardless of whether they have been trained by a foreign military.

The unabashedly liberal city of San Francisco became the unlikely proponent of weaponized police robots last week after supervisors approved limited use of the remote-controlled devices, addressing head-on an evolving technology that has become more widely available even if it is rarely deployed to confront suspects.