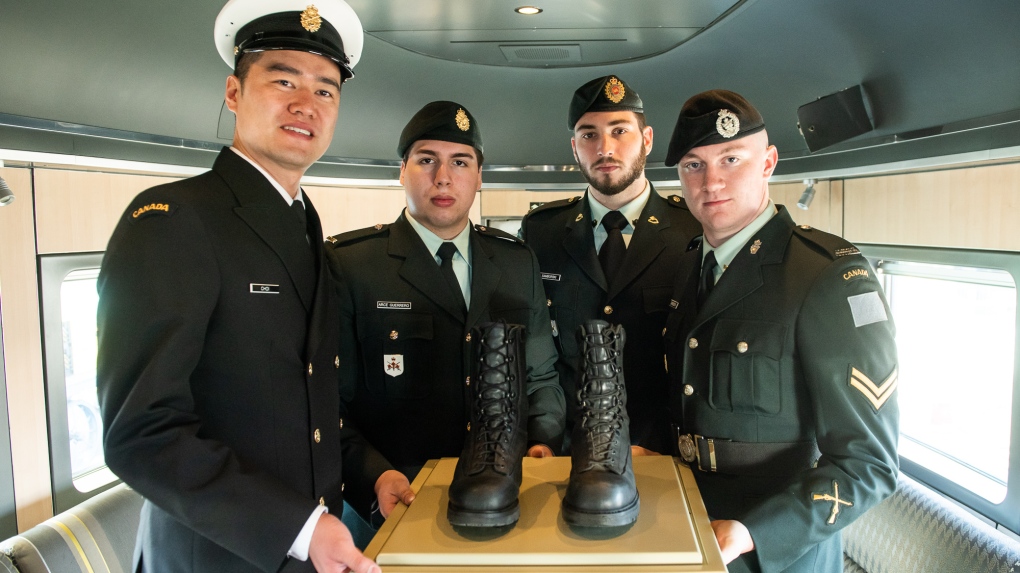 A pair of boots will begin a very special journey on Sunday.

The combat boots will travel on a train departing from Quebec City, one of several taking part in the “Journey Across Canada” project to commemorate the 75th anniversary of D-Day.

Fourteen trains making their way to Halifax will each symbolically carry a pair of combat boots as a tribute to Canadians from all walks of life who made the journey across the Atlantic Ocean to Europe and landed at Juno Beach to join the Allied forces in the invasion of Normandy, France on June 6, 1944.

As the D-Day anniversary approaches, Veterans Affairs Canada, Via Rail, Parks Canada and various community organizations are holding several “departure ceremonies” across the country. Via Rail trains, each carrying a pair of boots, have been travelling to Halifax from various locations since March.

The reaction to the ceremonies, which include the participation of Second World War veterans, has been “very positive,” said Robert Loken, national manager of commemorations at Veterans Affairs Canada.

“It has been a beautiful experience watching youth engage with veterans, asking questions, asking for autographs. They don’t want to lose the chance to talk to someone who lived the real story, be it the adventure of train travel, or landing at Juno Beach. They are heroes in the eyes of these kids,” said Loken.

Equally, veterans have been “truly honoured" by the initiative, he said. "Although it is difficult for some to share stories, they have been thrilled to speak of their experiences with children, who in turn, will tell their friends.”

The 14 pairs of combat boots will be presented at commemorative ceremonies in Halifax on June 6. One pair will make the journey to France for ceremonies at Juno Beach on the same date.

The departure ceremony in Quebec City will take place on Sunday, from 1 p.m. to 2 p.m., at Gare du Palais Station. The event is open to the public.

On June 6, 1944, Allied troops stormed the beaches of Normandy to open the battle to Germany from the west. Victory at the Normandy campaign came at a bloody cost, with Canadians suffering the greatest amount of casualties of any other division in the British Army Group.

For more information, go to the Veterans Affairs Canada at www.veterans.gc.ca.