MASCOUCHE, QUE. -- Residents of a town north of Montreal on Tuesday were clearing out tree branches and twisted debris scattered by a deadly tornado that tore through the community and killed one of their neighbours.

The tornado Monday afternoon carved a destructive path through a residential neighbourhood of Mascouche, Que., snapping mature trees in half, tearing chunks out of roofs and ripping one home under construction off its foundation.

A man died after taking shelter in his shed, while two other people were injured when the tornado touched down. The Quebec coroner's office identified the victim as 59-year-old Jacques Lefebvre.

Michel Vachon said he and Lefebvre, a grandfather, had been outside behind their homes building a small bridge when they saw the tornado approach.

"When it came, it came too fast. We didn't have time to do nothing," he said in an interview. "I lost my friend. He went this way, and I (went) in my home and had just the time to close the door."

Vachon said he'd been friends with Lefebvre for 30 years, and would remember him as someone who was always ready to help others. "Everybody liked him," he said. "He's a very good neighbour."

The field behind their homes was littered with debris that included pieces of wood, vinyl siding, bicycles and lawn mowers. Vachon said his neighbour's body was found in the field, dozens of metres from where he was last seen. In the middle of the field, a pot of red flowers sat on a torn piece of plywood, with a note attached that began: "Hey Jacques, thank you for everything. Rest in peace."

Environment Canada says a thunderstorm cell at around 3:45 p.m. generated the tornado. Meteorologists who surveyed the damage Monday evening say their preliminary findings suggest the tornado's maximum wind speeds measured between 180 and 200 km/h, consistent with an EF2 tornado on the Enhanced Fujita Scale. The scale rates wind damage between zero and five, with five being the strongest.

Residents interviewed Tuesday described a sudden, roaring wind, and a fast-moving black funnel cloud that picked up anything loose in its path and threw it blocks away. Sophie Michaud was out in her backyard, taking stock of a topsy-turvy scene that included a trampoline on her shed. She said her partner had been firing up the barbecue when the wind picked up, and he had just enough time to get inside.

"He closed the door and we just saw the barbecue fly in the air, the trampoline flew onto the house," said Michaud. "It happened in a fraction of a second."

Despite some roof damage and a tree that smashed through the windshield of her SUV, she's relieved that she, her partner and her three children are all safe after a scary experience. She says her neighbour, who was hospitalized, wasn't so lucky.

Across the street, half a full-sized tree sat in the swimming pool of Johny Pierre's home, which was missing most of the shingles on the roof. "It was terrible," Pierre said. "It was like everything was flying."

Pierre said that while his home and backyard are heavily damaged, it could have been worse. He says his young son goes for a swim every day after school, and could easily have been in the pool had the tornado come just a bit later. "When I learned my wife and my son were safe I said, 'We can repair the home, we can repair the car,' " he said.

"Like many of you, I saw the images. It seemed surreal. It looked like a horror movie," said Legault as he offered his condolences to the family of the man who perished and the 50 families whose homes were damaged.

Mascouche Mayor Guillaume Tremblay said late Monday the city was caught off guard by the twister, but its emergency response plan was quickly put into action and worked well. A spokesperson for the town says nearly 100 buildings were damaged.

The Red Cross had said it was preparing to help between 50 and 100 people access food, clothing and temporary shelter. The agency says far fewer people will be requiring assistance going forward.

A spokesman for Hydro-Quebec said 40 of its crews were on scene and they hoped to restore power later Tuesday or Wednesday. He said some 20 poles had to be replaced and countless tree branches and mangled power lines needed to be hauled away.

Environment Canada had issued severe thunderstorm watches for many areas of southern and central Quebec on Monday because of high humidity and high temperatures. The agency says damage reports from other parts of the province are being analyzed.

According to Environment Canada, Canada gets more tornadoes than any other country except the United States. Other high-profile twisters include:

1912: Known as the "Regina Cyclone," Canada's deadliest tornado ripped through six city blocks in Regina, Sask., on June 30, killing at least 28 people, injuring 300 others, and leaving a quarter of the city's population homeless. While it only lasted for a few minutes, it took the city almost 50 years to pay for the damages.

1946: Canada's third deadliest tornado tore through the Detroit River on June 17, killing 17 people and damaging 400 homes in Windsor, Ont., and the surrounding areas. The twister also demolished over a hundred barns and farm buildings.

1974: A series of deadly tornadoes -- known as the "1974 Super Outbreak" -- struck Ontario and multiple U.S. states between April 3 and 4. Eight people died when a funnel cloud touched down in Windsor, and over 300 died in the 13 affected American states.

1985: Fourteen tornadoes hit multiple Ontario communities on May 31, including Barrie, Grand Valley, Orangeville and Tottenham. Twelve people died, eight of them in Barrie, and hundreds more were injured. The tornadoes also destroyed or damaged more than 1,000 buildings.

2007: On June 22, the country's first F5 tornado -- the most powerful on the Fujita intensity scale -- slammed Elie, Man., with winds exceeding 420 km/h. No fatalities or serious injuries were reported, though the strong winds severed utility poles, uprooted trees, and reportedly picked up an entire house and carried it a few hundred metres through the air.

2011: A historic Ontario town was devastated after the province saw its strongest tornado since 1996. One person was killed and 40 more were injured after an F3 tornado hit Goderich on Aug. 21.

2018: Six tornadoes swept across the Ottawa area and through the neighbouring Quebec region on Sept. 21, levelling homes and knocking out power grids along their way. No one was killed but dozens of homes were destroyed.

2020: Two teens were killed on Aug. 7 when a tornado touched down on a highway near Virden, Man., and tossed their vehicle into a field. Environment Canada classified the tornado as an EF3 on the Enhanced Fujita Scale, with estimated wind speeds of 260 km/h.

- This report by The Canadian Press was first published June 22, 2021. With files from CTV News Montreal. 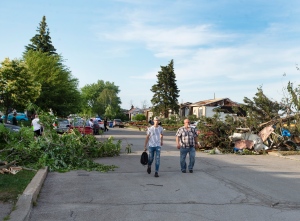 IN PICTURES: Deadly tornado in Quebec