Back in 2018, the City of Montreal sued a local producer for between $1,500 and $2,000 for using the word "cheese" on its packaging to describe its vegan cream cheese products, but after winning a four-year court battle this week the small business gets to keep all that cheddar.

The lawyer who helped the Montreal company, Rawesome Raw Vegan Inc., win an appeal said she believes this is the first case of its kind in Canada and that the legal victory could be a turning point for Canadian producers of vegan food products that feel pressured by the dairy industry.

"This is a decision that sets a precedent," said lawyer Natalia Manole, due to the fact that now "nobody has a monopoly on the word cheese and as long as you're extremely clear and precise with the fact that it's non-dairy cheese, you are basically respecting the regulations."

Operating since 2016, Rawesome has six employees and is nestled in the heart of Montreal's Villeray–Saint-Michel–Parc-Extension borough on Gounod Street. The city took the company to court over its cashew-based cream cheese and said the prosecution was based on "provincial and federal standards delegated to the City of Montreal."

Specifically, the city alleged the company violated article B.08.035 of the Regulations Respecting Food and Drugs, which defines the composition of cream cheese in Canada.

The packaging on the Rawesome product that caught the eye of city lawyers described the spread as "non-dairy cultured cashew cream cheese" in order to help convey the texture and density, the company said.

The municipal court agreed with the city and found Rawesome guilty on Oct. 22, 2021, of violating the law in using "cheese" to describe the product on the label, but the company fought back and appealed the ruling. The long legal battle ended on Monday, with Superior Court Justice Gregory Moore cancelling the verdict and acquitting Rawesome of the infraction.

Manole said the judge agreed that the federal regulation does not apply to Rawesome's products because the standards apply to dairy cheese, whereas Rawesome's packaging clearly states its products are "non-dairy" vegan cheese.

Victor Belev, Rawesome's president and founder, told CTV News that he's "very relieved" the court case is finally over, but said that he wants an apology from the city for going after his business and "wasting taxpayer money."

"It was a big financial strain. Just that uncertainty that followed for the last four years. It was definitely not a good thing to be worrying about when you're trying to grow a small business." 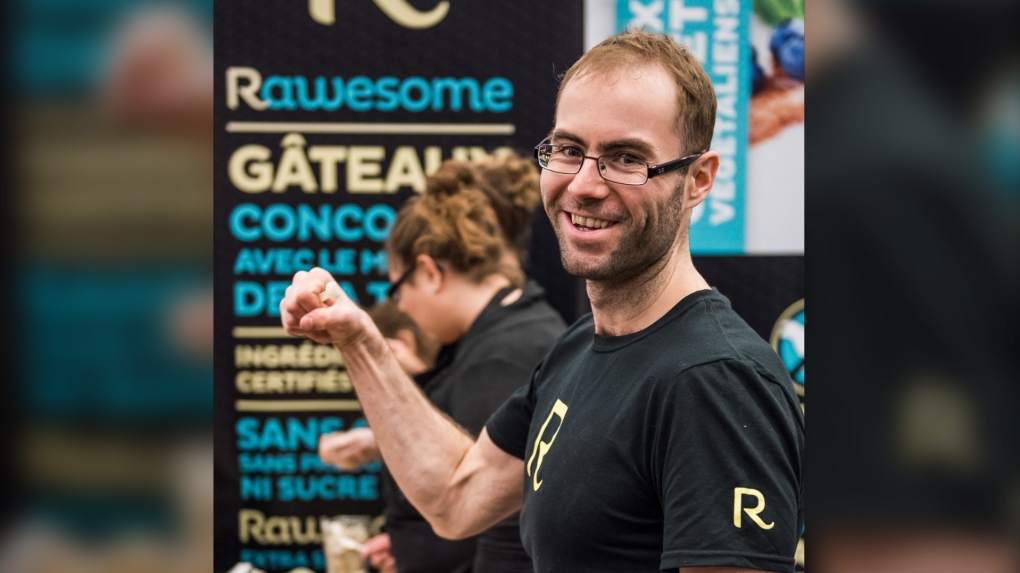 Victor Belev is the president and founder of Rawesome Raw Vegan Inc. in Montreal. (Submitted photo)

The city did not respond to a request for comment from CTV before publication time.

On Sept. 20, CTV asked the city why it sued the company and what were the court costs related to the prosecution.

In a response issued by the city on the evening of Sept. 23, two days after this story was published, a spokesperson said it acted after receiving two complaints "related to the confusion of the name 'non-dairy cashew cream cheese' and had an obligation to address them."

"We follow the instructions of the [ministère de l'Agriculture, des Pêcheries et de l'Alimentation du Québec] in this file," wrote spokesperson Mélanie Dallaire in an email. "We had the obligation to follow up on founded complaints."

The city refused to say how much money it spent taking Rawesome to court because that information is "confidential," according to the spokesperson.

The case marked the first time the City of Montreal took a company to court over the use of "cheese" and vegan products.

"I'm extremely happy, obviously, that Rawesome did not just simply pay the fine that Rawesome was condemned to pay and decided to contest this and to go all the way to the end," said the company's lawyer. "This is a huge victory, actually, for vegan cheese. And I think that justice was rendered."

Manole is also spearheading a broader constitutional argument with the federal government and is seeking a declaratory judgment that the food and drug regulations do not apply to all producers of vegan cheese products. That case is still before the court.

CASE IS 'STEP IN THE RIGHT DIRECTION': PROF

This is not the first time a vegan food producer has faced pushback over labelling.

Blue Heron, a British Columbia-based company that also sells vegan cheese products, won a dispute with the Canadian Food Inspection Agency (CFIA) in 2019 over labeling of its products. The case never went to court after the CFIA said the company could use the word "cheese" in marketing materials as long as they preceded it by saying it was 100 per cent dairy-free and plant-based.

Sylvain Charlebois, Dalhousie University professor and director of the Agri-Food Analytics Lab, also agreed this is "an immense victory" for the vegan food industry, which he said often finds itself going feeling threatened by deep-pocketed dairy boards.

"These products are often seen as a threat, and they will actually try to do anything to squash that threat, which was the case with the 'fauxmage' and plant-based cheese that we've seen over the last several years," Charlebois said.

"These products are bringing something new to the market, something that many consumers are looking for. But unfortunately, there's been some hurdles related to the nomenclature of these products. And so which makes some of these battles quite ridiculous. So to actually see one company, go head-to-head with the dairy industry, it's quite audacious, in my view."

He said it remains to be seen whether the Montreal case will indeed set a precedent in Canada and influence policy across the country.

"I'm cautiously optimistic that things will change," he said, "but this ruling is a step in the right direction."