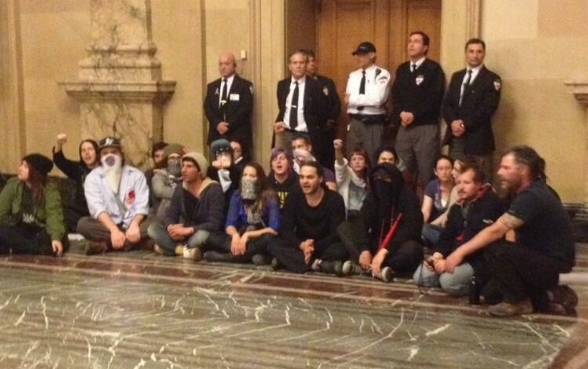 Demonstrators stage a sit-in at city hall after the P6 vote was struck down.

MONTREAL -- Despite resistance from protesters, Montreal city councillors have voted to keep the amendments to controversial municipal bylaw P6.

Both opposition parties at city hall vowed to vote against the anti-protest bylaw, which prohibits demonstrators from wearing masks and also requires them to provide a route of their marches.

Plans to strike down the amendments were rejected in a city council meeting Tuesday night, when it was voted 34 – 25 in favour of keeping the regulation.

Protests continued both inside and outside city hall Tuesday as crowds gathered to tell politicians they felt the bylaw was unconstitutional and infringed on their basic rights.

They loudly, but calmly, blocked the entrance to city hall in a sit-in city Tuesday night in defiance of the bylaw. Protesters sang and chanted, sitting on the floor of city hall.

The decision comes after nearly 800 protesters have been ticketed since the beginning of the year, each slapped with $637 fines for taking part in illegal protests.

“This sort of bylaw cannot be tolerated. We will continue to fight it in the courts and in the streets,” said Jeremie Bedard-Wien, spokesperson for the student group ASSE, at a rowdy protest outside city hall Tuesday.

Applebaum said he felt it was necessary to uphold the bylaw to maintain public peace and security.

“For me, it’s clear, that by-law has to stay in place, and the police department has my total support,” he said.

With the vote, the city’s executive committee is expected to also vote in favour of upholding the bylaw.

“The executive has basically said 'no.' The bylaw has proven to be effective, the police believe it's a tool that has created social peace in Montreal without in any way suppressing the right of dissent and demonstration,” he said.

Alain Creton of the Peel Street Merchants' Association, who said businesses were damaged and threatened by a few acts of vandalism during the many protests last spring, said he didn't think the right to protest should be taken away, but he thought the anti-mask regulation was valid.

"I want the reglementation to stay we are not against any manifestation, but we when defend a cause, you take off your mask, you present yourself, and you are proud of what you are representing," he said.

One protester said regardless, her right to protest had been stripped.

"Right now, what we are doing is criminalizing dissent, end of story," she said.