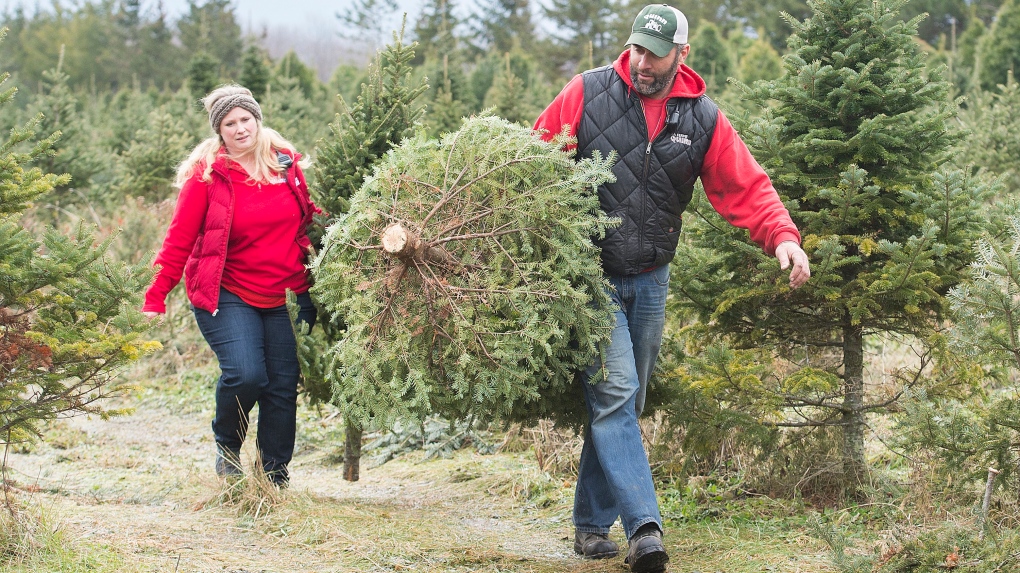 Quinn Farm co-owners Phil and Stephanie Quinn carry Christmas Trees that are ready for customers on their farm in Notre-Dame-de-L'lle-Perrot west of Montreal, Tuesday, December 10, 2019. THE CANADIAN PRESS/Graham Hughes

MONTREAL -- Canadians planning to buy a Christmas tree this winter should start shopping now and be ready to pay a premium, says the Canadian Christmas Tree Growers Association (CCTGA).

Producers are predicting that 2020 will be a record year for sales. Larry Downey, the president of the association, said this was a simple matter of supply and demand: a lack of trees coupled with a heightened demand from people hoping to spruce up their homes at a time when they have to stay in.

“Personally, we don’t anticipate that COVID will affect us,” said Downey, whose family farm in Hatley sells up to 30,000 Christmas trees a year.

Most wholesalers with whom Downey spoke this year have already seen record sales, he added, mostly due to demand from the United States. Retailers usually put in their orders starting in June, he noted.

The Christmas tree market is still feeling the effects of the Great Recession, which put numerous American producers out of business and forced others to reduce their plantations. Since young trees take eight to 10 years to reach the usual height of a Christmas tree, the effects of this reduction have only been visible recently.

Downey confirmed that Christmas trees are selling for $5 more than last year, following the pattern of recent years. The average price for a tree rose by 123 per cent, to US $78 in 2018 from US $35 in 2013, said the National Christmas Tree Association in the U.S.

Prices are also up in Canada. Stéphane Bernier, who runs the Plantation Bernier at Lac-Brome, and Bronwyn Harper, who co-owns the Hillcrest Tree Farm near Ottawa, both say they increased the prices for their trees this year.

Certain types of trees, such as Fraser ones, are even more sought-after. Harper says she sells Fraser trees for about $85 – or $20 more than last year – since the provider increased prices (Fraser trees cannot grow on her property due to terrain, explained Harper).

The anticipated heightened demand has also triggered a rush among retailers to bulk-buy more trees.

Phil Quinn, co-owner of Quinn Farm near Montreal, says he has had to buy additional trees from retailers to sell them on his farm, since he was not able to grow enough to answer the demand he is predicting this year. Harper says she has received numerous phone calls from people looking to buy trees in bulk even though she only sells retail.

“Everyone wants a tree and they want it now,” said Quinn, who is expecting to see his entire stock gone before the second week of December.

While the demand for trees should be high, however, the pandemic has created its own challenges for sellers. Most of them will not be able to offer the usual extras this year, as social distancing requirements forced them to abandon the usual attractions like carriages rides and outdoor fireplaces.

Harper said that her biggest challenge will be to develop social distancing directives for people coming to pick up their trees. The farm owners will not allow people to bring their dogs and, instead of serving hot apple cider, Hillcrest Tree Farm will offer guests candies when they leave.

“What could usually be an hour-long visit will be much shorter this year,” said Harper.

On a similar note Serge Lapointe, owner of Plantation JLS in Sainte-Angele-de-Monnoir, confirmed his farm would not be having a get-together for Christmas tree owners this year. Santa will also not be available for pictures, unlike previous years.

Tree retailers could also face competition from big online players. On their website, Home Depot and Walmart both have Fraser trees in stock, available for delivery before Christmas. A search on Amazon did not turn up natural trees, although many artificial ones are available.

But Quinn thinks that people will take the chance to find their own tree themselves.

“People just want a sense of normality,” he said.

This report by The Canadian Press was first published Dec. 1, 2020.