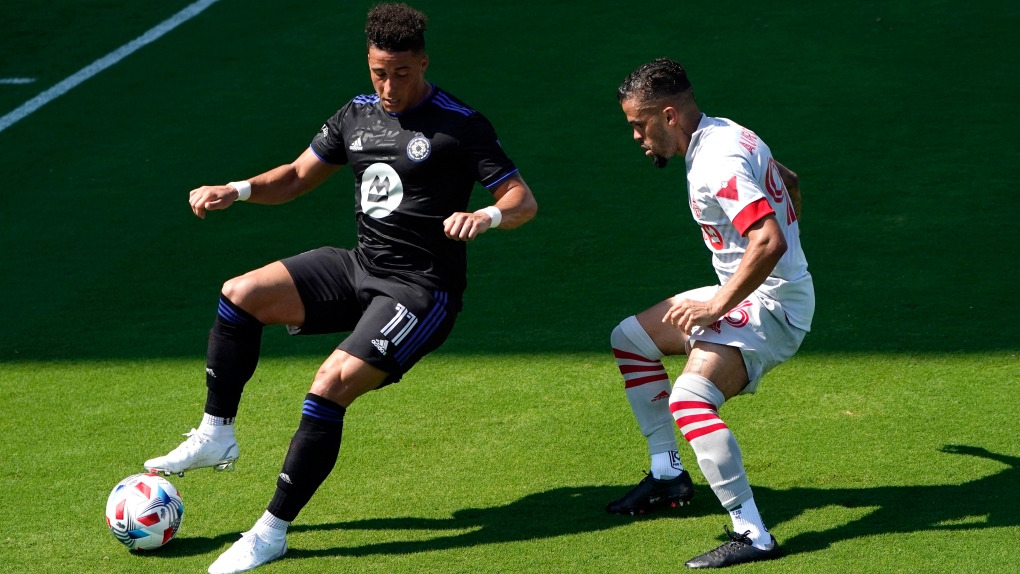 Mark Delgado and Richie Laryea, with a late goal, replied for Toronto at DRV PNK Stadium (pronounced Drive Pink), which is home to Inter Miami CF.

The game was a matchup of new coaches with 44-year-old Wilfried Nancy in charge of Montreal and 48-year-old Chris Armas at Toronto's helm.

The tables were turned Saturday.

"I'm not surprised about what the team did today, because this is the way we've been working for a long time," said Nancy, who was a former assistant coach to the departed Thierry Henry. "And today, I'm very happy because they put all the emotions on the side and they stayed on the task.

"For a first game as a coach, against Toronto, yes I'm happy for sure. But again this is only the first game so we have to keep moving," the Frenchman added.

It was a deflating day for Armas, whose team dispatched Mexico's Club Leon midweek in CONCACAF Champions League play.

"It's quiet in that locker-room. Much different from a few nights ago," Armas said. "In some ways it'll be good for our team to feel what that's like and for all those players to understand that it's not just about showing up because you're Toronto FC. And it becomes easy, just because.

"When you look at the game, the starting point is we just finished second all day long," he added.

"It starts with the coaching, the duels, tackles -- coming in second all day long. In moments we looked like we were out here for a pass-around. Just not good enough. When you're not good enough against a team that can hurt you in transition, that's what it looks like."

Saturday's match was officially a home game for Montreal. Both Canadian teams have set up shop in Florida due to pandemic-related travel restrictions. TFC is based in Orlando.

The temperature was 32 degrees Celsius for kickoff, with Montreal coming on strong.

Montreal took advantage in the third minute after a stumbling Auro lost his balance and the ball near the halfway line.

Zachary Brault-Guillard drove towards the Toronto penalty box before finding Toye to his left.

With fullback Laryea up the field and centre back Omar Gonzalez unable to close, Toye curled a right-footed shot past Alex Bono from just inside the penalty box.

Toye's goal was his first in Montreal colours after arriving in a trade with Minnesota last October.

Montreal doubled its lead with a wonder strike in the 24th minute.

Another poor touch, this time deep in Montreal's end, cost Auro with Montreal defender Joel Waterman sweeping the ball into the deserted Toronto half.

Quioto gave chase, outpaced debutant defender Luke Singh and, still at high speed, hammered a high shot past Bono at the near post from a tight angle.

Auro had a chance to redeem himself from the penalty spot late in the half when Waterman took him down as he sliced into the penalty box.

The Brazilian fullback converted a spot kick in pre-season, but this time Clement Diop stopped his weak stop-start penalty.

Toronto got another shot when Diop, after video review, was deemed to have moved off the line early by referee Ismail Elfath.

Delgado stepped up to the penalty spot and made no mistake, sending Diop the wrong way in the 44th minute.

Spanish playmaker Alejandro Pozuelo normally takes penalties for Toronto, but the reigning league MVP is out with a thigh injury.

Nancy's message at halftime was to "stay composed and calm" and his team kept its foot on the gas.

Wanyama restored Montreal's two-goal lead in the 54th minute. He rose above Toronto captain Michael Bradley at the far post to head in a Mustafa Kizza corner and complete a Uganda-to-Kenya connection.

The crafty Mihailovic, who cost up to US$1 million in allocation money in a December trade with Chicago, made it 4-1 in the 71st minute.

Mihailovic, who excelled playing behind the Montreal forwards, split Singh and Gonzalez and blasted a shot by Bono to open his Montreal account.

Laryea made it 4-2 in the 88th minute with a superb individual effort dribbling past three Montreal defenders to beat Diop from close-range.

"It's a frustrating day," said Bradley. "We never really gave ourselves a chance with the way we started the game. I mean, obviously we spoke a lot before the game about understanding that -- we knew we would be playing a team that's motivated for their first game this season."

Toronto was missing at least four starters, hurting at both ends of the field.

Midfielder Jonathan Osorio was suspended after kicking out at Nashville's Alex Muyl in the playoffs last season.

Some pundits were quick to write Montreal off this season after an exodus of name players. Saturday was a resounding rebuke to the doubters.

"It's early days, but this definitely a big positive for us moving forward," said Toye.

Armas went with the same starting 11 he used midweek against Leon. That meant first MLS starts for 20-year-olds Singh and Noble Okello and a second for 18-year-old Ralph Priso.

Singh officially joined the first team Friday as a homegrown player, although he saw action in both games against Leon after signing short-term contracts.

The two teams combined for nine Canadian starters -- five for Toronto and four for Montreal.

This report by The Canadian Press was first published April 17, 2021