Catalytic converter theft on Montreal's West Island just one of hundreds in Quebec, police on alert

MONTREAL -- Robert Posman got a steal on a near-mint condition 2015 Hyundai Tuscon with around 32,000 kilometres on it.

The car ran great, until he parked outside his office Montreal's West Island Thursday, returned to his car and heard the problem: someone had stolen his catalytic converter.

"The car has a massive like wild sound a deafening sound," said Posman.

Surveillance video of the theft shows a BMW driving up to Posman's car, pulling up beside it while two people get out to get to work cutting the catalytic converter from the bottom of his vehicle.

"You could see two feet, a cut at both ends of the exhaust," he said.

When he took his vehicle to MTA-Auto in LaSalle, his mechanic, Alex Pasquariello, knew exactly what had happened.

"All these little SUVs are a little high up, and when the catalytic converter is located right in the centre of the vehicle, they have easy access to just slide under and cut them right off," said Pasquariello. "It takes them literally, 30 to 40 seconds."

TARGETED FOR THEIR METALS

Media on both sides of the border are reporting a drastic rise in the part particularly during the pandemic.

Pasquariello said the shop saw around four to five catalytic converter replacements in a typical year, but that number has jumped to around 30-35 in the past year.

"They're worth big money," he said. "The worst one that I've seen so far ended up costing the insurance company $11,000."

Thieves are after the precious metal found in the part: platinum, rhodium and palladium.

Brian Goodleaf operates Goodleaf's Auto & Recycling in Kahnawake. His yard is typically filled with scrapped vehicles ready to be picked at for parts.

He said a steady stream of clients swings by to try and buy catalytic converters either to replace stolen parts or to purchase them in bulk to resell.

"I have every walk of life trying to buy my catalytics," he said. 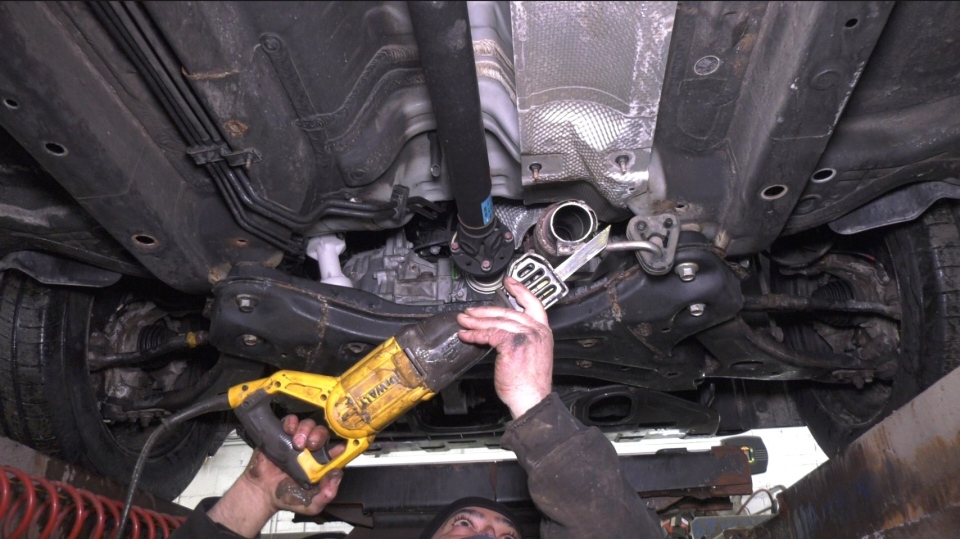 At times, Goodleaf also has people trying to sell a converter that has clearly been removed with a hacksaw as scrap.

Goodleaf does not sell the part and only ever buys the piece from dealers he knows.

"I say, 'take your cat and get out,'" said Goodleaf. "I don't buy cats unless they're on a car, and they match the registration number."

The SPVM said it currently has a team assigned specifically to the issue, and said there have been no other specific parts targeted by thieves.

Posman filed a police report when his converter was stolen, and is hoping to draw attention to the issue.

"These guys really know what they're doing," he said. "They skipped over those they looked at mine and they noticed I didn't have a dashcam, so they parked in the open spot... Somebody got out of rear passenger door, and he crouched to avoid getting caught on security camera. The other guy went parked next to my car."

The video lasts about two minutes.

The Surete du Quebec (SQ) said the piece is being stolen from cars across the province with all departments reporting a rise in thefts.

"In the last month, we've had a lot, more than a hundred cases of catalytic converters were stolen," said SQ spokesperson Louis-Philippe Bibeau. "This is on right now. It's a lot of little groups doing the thefts. A lot of cases."

Bibeau said there have been arrests made in the past month with other investigations ongoing.

He recommends parking your car in your garage if possible or spots with high visibility.

Due to the speed with which thieves can remove the part, however, it may not always help, as was the case with Posman.

The SQ's first piece of advice, however, is for citizens to be aware of the problem.

"The best prevention is if everyone is looking and if they see suspicious people, someone under a car, take all the details and call 911," said Bibeau.

If convicted, Biebeau added, sentences can range from two to 10 years in prison depending on the value of the materials stolen.

"At the Surete du Quebec and other police departments have the same problem and other agencies of police are sharing information," he said.

LISTEN ON CJAD 800 RADIO: We told you about catalytic converter thefts, now Kris Begic, Vice President of Platinum Group Metals tells you how easy it is to steal them