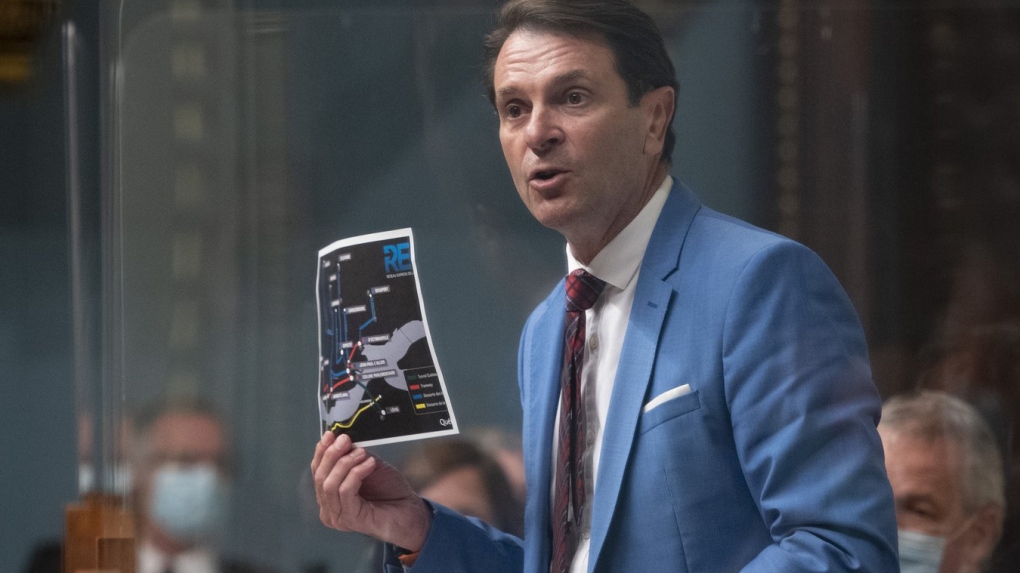 Quebec Transport Minister Francois Bonnardel responds to the opposition over the Quebec-Levis tunnel project, during question period Tuesday, September 14, 2021 at the legislature in Quebec City. THE CANADIAN PRESS/Jacques Boissinot
Levis -

To connect the downtowns of Quebec City and Lévis, the Legault government now plans to build two tunnels, with a total of four lanes, none of which will be entirely reserved for public transit.

This was confirmed Thursday by Transport Minister François Bonnardel at a press conference to present the new version of the third link project, in which Premier François Legault did not participate.

Gone, then, is the project presented with great fanfare by the CAQ government in May 2021, which provided for a huge two-storey tunnel, with six lanes and valued at $10 billion.

"This new idea of drilling two smaller tunnels under the St. Lawrence River will save taxpayers about $3 billion," said Bonnardel.

The cost is now estimated at $6.5 billion. The "update" of the third link project was made necessary by "galloping'" inflation and labour shortages, the minister said.

While in Lac-Mégantic on Thursday, Legault said "it's a lot of money, but it's necessary. He reiterated that he expects Ottawa to pay 40 per cent of the bill, although he has not yet received a firm commitment to do so.

"The federal government would be very wrong not to contribute its 40 per cent. It has done so in other projects in the rest of Canada," Legault said.

Contrary to what was originally planned, there will not be a dedicated lane for public transit. Instead, the focus will be on dynamic management, so that at least one lane will be reserved for buses during rush hour.

The Legault government has always been criticized for its inability to produce studies proving the need for a third link in Quebec City, the cost of which will be passed on to all Quebec taxpayers.

On Thursday, he suggested that by 2036, 36,800 additional inter-city trips will worsen traffic, which has increased by more than 20 per cent in nearly 20 years on the two aging bridges.

Quebec City estimates that in a decade, 143,000 vehicles per day will cross the Pierre Laporte Bridge, while it was designed for a daily traffic flow of 90,000 vehicles and records 126,000 per day.

The current average wait time on the Pierre Laporte Bridge is 20 minutes, according to the Ministry of Transportation, which calculates that it will rise to 28.2 minutes by 2040.

After the minister's press conference held Thursday at the Lévis Convention Centre, Quebec City Mayor Bruno Marchand told reporters that he had yet to be convinced.

"It's a project that needs to be defined," he said. "We are presented with a vision today. We will need evidence, facts, data ... A lot remains to be demonstrated."

For example, he finds it difficult to see how he could "endorse" a project that would "add to urban sprawl." Bonnardel had earlier spoken of "rebalancing."

"Rebalancing means developing the east as we have developed the west. So it means more urban sprawl," said the Quebec City mayor, who did not applaud at the end of the presentation.

"I have nothing against the fact that families want to settle where they want. The issue here is the impact it has on transportation and on GHGs [greenhouse gas emissions], which prevent us from reducing our GHG emissions in order to reach our (climate) targets," he added.

In contrast, Lévis Mayor Gilles Lehouillier hailed it as an "excellent project."

"I'm convinced that this project will be socially acceptable," he said. "You saw the range at the budget level, at the level of technology, we will reassure people ... This is the best project."

Bonnardel also promised an annual update between now and the filing of the business case in 2025. The inauguration of the new third link is scheduled for 2032.

In the morning, Sol Zanetti, the Québec solidaire MNA in Jean-Lesage, had declared that the CAQ was "stubborn" in presenting a project "to widen highways."

In a press conference at the National Assembly, Zanetti described the revised third link project as "ridiculous, harmful, absurd". "It is a project of urban sprawl, of increasing the GHG balance."

He deplored the abandonment of the "only issue that could have a quarter of a thousandth of a fraction of common sense, which is public transit."

For the Liberal environment critic, Isabelle Melançon, it is obvious that Premier Legault was absent "because he must know himself that it makes no sense."

With this "electoralist" project, the government is essentially trying to "save Éric Caire's seat," denounced Parti Québécois member Pascal Bérubé.

In 2018, Caire, who is the current Minister of Cybersecurity and Digital, had promised to resign if the CAQ backed down on the third link file.

"There is no MNA who will see his re-election worth as much as he does,'' Bérubé quipped.

-- This report by The Canadian Press was first published in French on April 14, 2022.