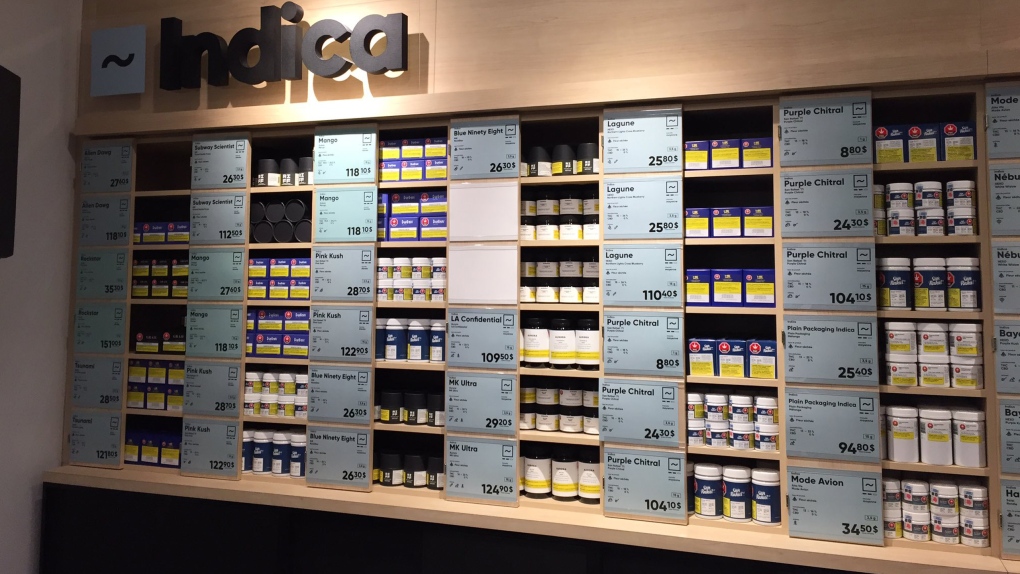 13 strains of indica cannabis are stored on shelves in an SQDC store in St. Hubert Plaza. (CTV Montreal/Cindy Sherwin)

MONTREAL -- The Societe quebecoise du cannabis (SQDC) brought in $5 million in profits on revenues of $63.8 million during the second quarter of its fiscal year.

The Quebec government, which runs the network of cannabis stores, took in $17 in million in taxes and excise fees during the 12-week period ending Sept. 14, the SQDC says.

During its second quarter, the SQDC added four new stores - in Montreal, Sherbrooke, Saint-Jerome and Sainte-Agathe-des-Monts - to its network, which should grow from 20 stores to 30 stores by the end its third quarter at the end of March.

In terms of volume, the SQDC says it sold 8,641 kg of cannabis during the quarter. The 20 SQDC stores brought in $58.3 million in sales while online sales accounted for $5.3 million.

Halfway through its fiscal year, the SQDC has turned a profit of $6.3 million on $108.7 million in sales and brought in $30 million in government revenue.

The average price of a gram of cannabis during the quarter was $8.39.

This report by the Canadian Press was first published Dec. 6, 2019.