Cancel Halloween? You can pry it from Montrealers' cold, undead hands -- or just adapt it

MONTREAL -- It may be six weeks away, but communities, parents, organizers, kids and whatever spirits haunt the night have already started to think about what Halloween is going to look like during the pandemic.

Organizers of the annual popular Halloween event in Wakefield, Quebec decided to pull the plug on this year's event this week, but that's just one of many annual traditions that might not happen this year.

Some Montrealers have already made up their minds.

Marie Katura lives in the Plateau with four children, ages 12, 7, 4 and 2, and she didn't hesitate when asked whether she would let her children participate.

"I think that Halloween should happen, and if it can't happen we shouldn't have went back to school," she said.

She added that most parents she's spoken to in her neighbourhood feel the same way.

McGill University infectious disease specialist Matthew Oughton said if parents and children follow certain health protocols, there is no reason why they shouldn't be able to head out October 31.

"I believe that Halloween can be done safely," he said.

But Quebec director of public health Horacio Arruda brought up his concerns about Halloween earlier this month.

"If there is a Halloween, it will have to be a special Halloween -- different," he said.

"Perhaps we'll have some virtual Halloweens, but a Halloween where everyone is walking around and visiting other people's homes, that concerns me."

One thing that may ease Arruda's concern is that one of the health measures he's been repeatedly recommending will be very easy to follow.

"I think it's important to remember that it's really the only widespread holiday where mask-using is pretty much mandatory, so we've already got that going for it," said Oughton.

PRESS PAUSE ON THE HAUNTED HOUSES

The haunted houses packed with scared kids and those doing the scaring would be best avoided this year, according to Oughton.

Every year, owner Giovanna Giancaspro transforms Restaurant La Molisana restaurant in Ahuntsic into a haunted house for children to walk through, encountering zombies, vampires and other spooky spectres.

This year, if she does anything, it will likely not be the same kind of thing as usual.

"Honestly, I don't think anything is going to happen this year. A lot of people are holding back," she said.

However, if the weather cooperates, and if organizers can figure out how to social distance in collaboration with local police and firefighters, Giancaspro said she will contact the restaurant association to try to arrange something.

"I have an 'in' and 'out,' so it's not like they're going to be interacting with each other either way," said Giancaspro. "We have the doors to go in and the doors to go out, so the social distancing will be there."

She added that they might just switch the event to be outdoors and dress up like zombies or vampires to scare the children as they walk past on the street.

Kyle Zacharie is director of the Kahnawake Youth Center, which typically hosts an impressive haunted house in its facility on Montreal's South Shore.

Staff at the youth center are adapting to the pandemic and will combine their annual Mohawk Miles fun run with a zombie run, which they've organized in the past, said Zacharie.

"It's going to be a road race but dressed up," he said. "The Mohawk Mile Monster Mash."

Corn mazes and other outdoor events are better options, in Oughton's opinion. He feels the haunted houses and other indoor activities may need to lock their doors this year.

"I can see a good argument where those kinds of activities may need to be cancelled or postponed," said Oughton.

Los Angeles County Department of Public Health has banned trick-or-treating this year to halt the spread of the virus. 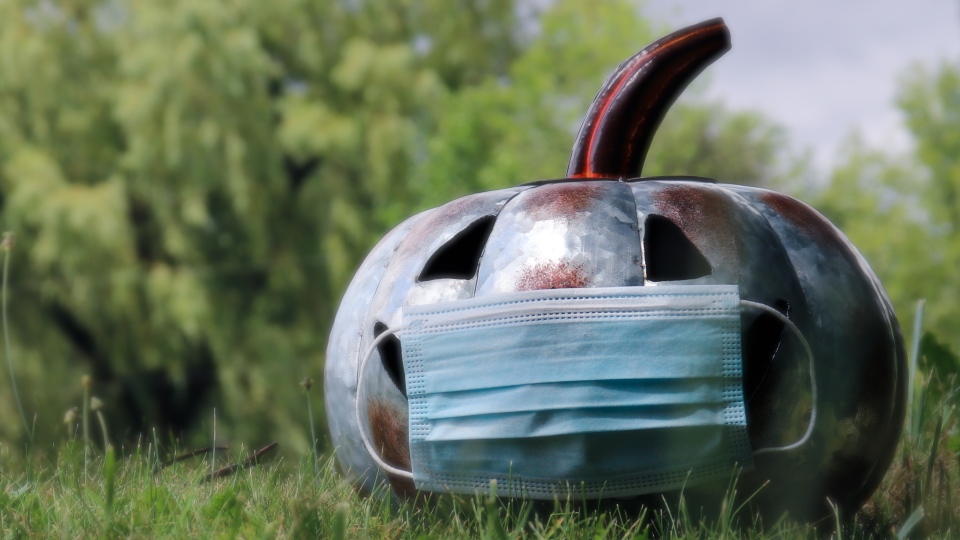 With four kids under 12, Katura will be hard-pressed to keep her kids from walking the Plateau looking to fill their bags with candy.

Oughton, who has three kids of his own, feels that it can be done safely if candy givers and receivers alter their typical patterns.

"You have to have some means of keeping your distance at your home when you're handing out candy," said Oughton. "What you don't want to do is have a big crowd on your doorstep."

Oughton was impressed by Cincinnati man Andrew Beattie's Halloween chute invention that allows him to slide candy through a tube to waiting trick-or-treaters.

"I thought that was pretty ingenious," said Oughton. "Because there is some distancing between the candy giver and the candy receiver at the bottom end of the chute."

The second step would be to ensure only one child at a time may approach the chute.

Having candies in bags waiting for kids to grab is also a good idea, said Oughton, so long as parents ensure they approach one at a time.

And what about the candy itself?

"That mode of transmission does not seem to be as important as direct, close contact from an infected person to a non-infected person," said Oughton.

Those concerned about surface transmission can always wash the candy or wait until the virus is no longer viable on the surface of the wrapper, which takes only a couple of days.

"You can always take the candy from them and keep it for a while if you're concerned about catching contagion that way, which I'm not," said Katura.

In any case, Halloween is the least of authorities concerns, some experts believe.

Halloween is mostly outdoors and much more easily adaptable, Oughton said, than upcoming ones such as Thanksgiving, Hanukkah or Christmas.

"Christmas is usually in colder weather and usually much more of an indoor, focused activity," he said.

"That's going to be the one that will require a lot more changes."