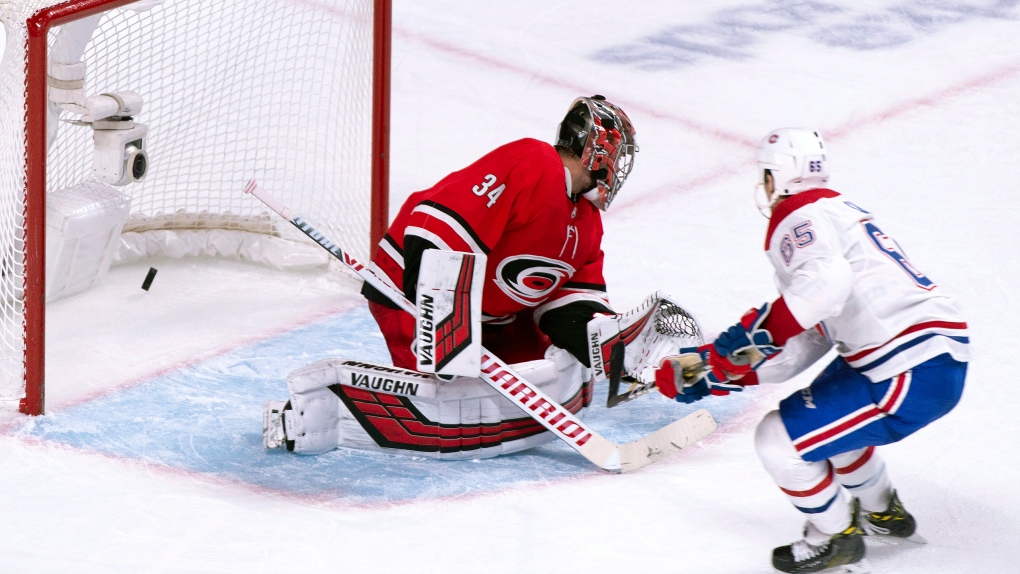 MONTREAL -- The Montreal Canadiens were determined to show their mettle after their worst performance of the season -- and they did just that.

Five different players scored for Montreal as the Canadiens downed the visiting Carolina Hurricanes 6-4 on Thursday night for their fourth win in the last five games.

The Canadiens were coming off a season-worst 7-1 loss to the Minnesota Wild on Tuesday and the team was desperate to follow that up with a victory.

"We definitely knew we needed to bounce back after our effort in Minnesota and I thought we came out and played a pretty solid game," said Carey Price, who made 27 saves for his fourth straight victory.

"The game's all about momentum and it seemed like it shifted throughout the course of that third period."

The two teams combined for seven goals in a back-and-forth third, with the Canadiens ultimately coming out on top.

"It was a bit wild," said defenceman Jeff Petry, who scored twice. "Not the ideal way you want to approach a third period. Good to get the points here. Big game tonight to kick off a three-game homestand.

"We had a solid effort and played pretty well."

Down 2-1, the 'Canes scored the equalizer 23 seconds into the third when rookie Andrei Svechnikov cashed in his own rebound on the doorstep.

Brendan Gallagher restored the one-goal lead 22 seconds later when he cut hard to the net and slid the puck between Petr Mrazek's pads.

After Artturi Lehkonen made it 4-2, Jaccob Slavin got one back for the visitors at 10:51.

The Canadiens went up 5-3 less than two minutes later through Andrew Shaw's ninth of the season, a breakaway goal at 12:24 to extend his point streak to six games.

"We have to stay right on them," said Slavin about conceding goals shortly after scoring. "We have to keep our foot on the gas. We can't take a breath. Roddy (coach Rod Brind'Amour) talks about that all the time. You can't take breaths right after you score."

Carolina cut the deficit again when Sebastian Aho beat Price with 4:22 remaining in the encounter.

Petry sealed the deal with an empty-net goal from deep in his own end with 1:59 on the clock -- his fifth goal in his past six games.

Mrazek, replacing the injured Curtis McElhinney, made 34 saves in defeat.

"We played a pretty good game," said coach Claude Julien. "We skated well, had some good chances to start the game and didn't give up too many chances. It opened up a bit in the third period."

This was the second of three meetings between the Canadiens and Carolina this season.

The Hurricanes lead the league in shots per game, but they only mustered four in a first period largely dominated by Montreal.

Svechnikov broke a scoreless deadlock with a 4-on-4 goal at 2:53 of the second period. With a burst of speed from centre ice, Svechnikov blew past Shea Weber and evaded his stick check before backhanding the puck into the roof of the net.

Matthew Peca, a healthy scratch for the last two games, levelled the score at 13:51 with his second of the season, and first since Nov. 8.

The Canadiens took the lead three minutes later when Petry, after a soft clearing attempt by the Hurricanes, walked into the slot and fired a wrist shot past Mrazek.

"This is where I have to be careful because I'm not happy," said Brind'Amour. "We needed much more out of certain guys and didn't get it tonight, so that's frustrating. Especially after we fought to get back."