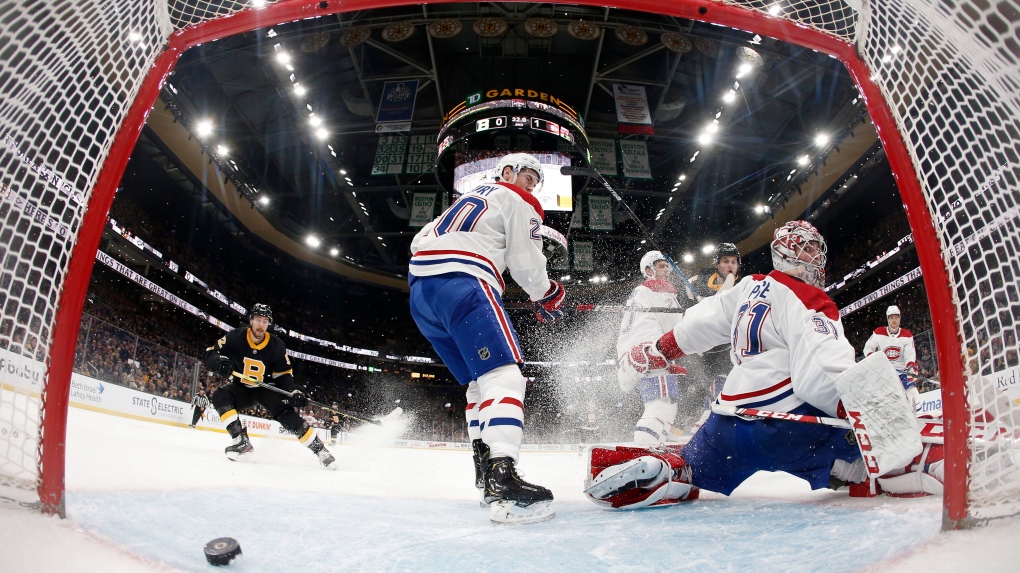 In this photo taken with a wide angle lens, Montreal Canadiens goaltender Carey Price looks behind him as the puck goes across the crease but not in as Boston Bruins' Sean Kuraly, left, moves in during the second period of an NHL hockey game Sunday, Dec. 1, 2019, in Boston. (AP Photo/Winslow Townson)

For the Habs it is now eight straight without a W.

Backes' first goal of the season came off a feed from David Krejci through the right circle, with 9:31 remaining in the third period.

Backes was in the lineup for the first time since being injured during a scary collision with Ottawa's Scott Sabourin on Nov. 2.

Jake DeBrusk added his sixth goal of the year on a give-and-go with Charlie Coyle two minutes later.

Tuukka Rask made 28 saves for the Bruins.

Boston extended its point streak to 11 games (8-0-3) and entered the third month of the season as the only team without a home regulation loss (11-0-4).

Joel Amir scored the opening goal for the Canadiens, and Carey Price had 31 saves for Montreal. The Canadiens extended their season-high losing streak to eight (0-5-3).

Montreal had allowed 24 goals in four prior games, including a season-worst 8-1 loss to Boston at home Tuesday that featured a hat trick by Pastrnak.

Price gave up five goals on 11 shots in Tuesday's loss to the Bruins and had surrendered 16 total over his last three games.

The Canadiens got off to a fast start this time after giving up three first-period goals in Tuesday's matchup.

Armia's backhand shot from the right circle deflected off Charlie McAvoy's skate and into the net for his 10th goal of the year 1:58 into the game.

Play was stopped with 2:47 left in the second as a scuffle broke out involving all 10 position players on the ice after Shea Weber interfered with Pastrnak.

Notice the nice takedown by Gallagher. Another loss but I always try to find something positive in every situation and I feel like this shows that our boys care. The last thing I’d want right now is Shea Weber going after me. Pastranak got lucky. #habs #gohabsgo #montrealcanadiens

Boston nearly tied it at the end of the ensuing power play when Matt Grzelcyk poked his own rebound straight across the crease behind Price.

Pastrnak evened the score at 6:16 of the third after skating into the right circle and firing a one-time shot past Price high to the stick side.