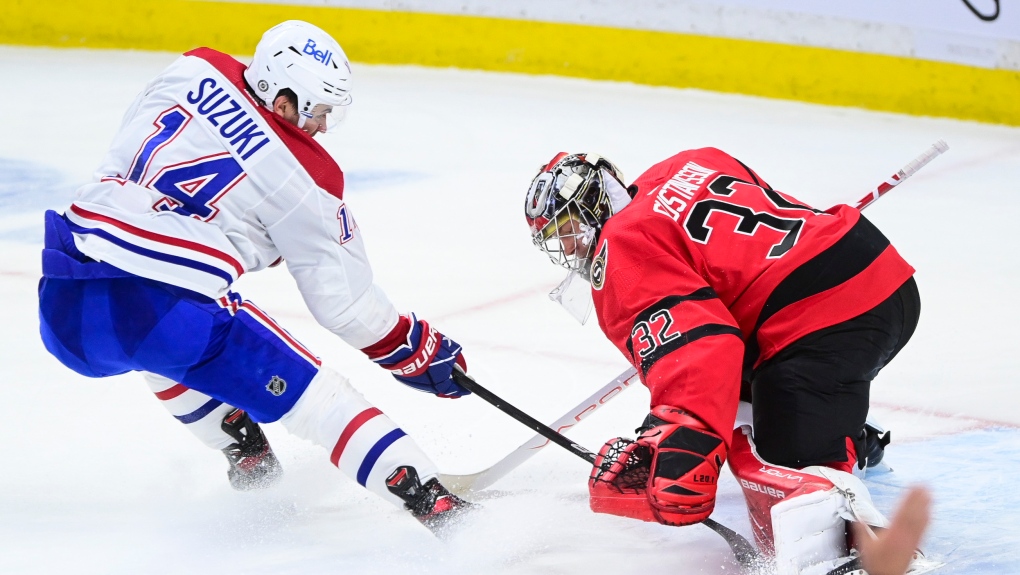 OTTAWA -- The Montreal Canadiens didn't sit around during their week of isolation.

Knowing full well a frantic sprint to the regular-season finish line was awaiting them on the other side of their COVID-19 scare, they did what they could to stay sharp both physically and mentally.

In two games back, Montreal hasn't missed a beat.

Jake Allen made 22 saves, Phillip Danault and Brendan Gallagher had a goal and an assist each, and the Canadiens defeated the Ottawa Senators 4-1 on Thursday to record their third consecutive win.

"It just goes to show the preparation the guys have," Allen said of his team's response coming out of its unplanned break. "You had to take care of yourself."

"It shows the dedication of our team," Danault added. "We knew we had a week off, but nobody took it for granted."

Canadiens forwards Jesperi Kotkaniemi and Joel Armia went into the NHL's COVID-19 protocol March 22, scrubbing three games against the Edmonton Oilers and another against Ottawa. Montreal returned to practice Monday before blanking the road-weary Oilers 4-0 some 24 hours later in one of three makeup games versus Edmonton.

"It was good that we played right away," said Allen, who picked up his first victory Thursday since Feb. 6. "We were jumping right into it with (Connor) McDavid, (Leon) Draisaitl. It didn't give you time to think."

Paul Byron and Corey Perry provided the rest of the offence for Montreal (16-8-9) against the Senators, while Jake Evans added a pair of assists for the first two-point game of his career. Tomas Tatar added two assists of his own as Montreal improved to 7-3-5 under rookie head coach Dominique Ducharme, who replaced Claude Julien on Feb. 24.

"That break really helped us," Evans said. "We had some (video conference) calls just to clarify a lot of things."

Connor Brown scored late in the third period for Ottawa (12-21-4) to spoil Allen's shutout bid. Filip Gustavsson made 34 saves for the Senators, who played for the first time since losing 3-2 to the Toronto Maple Leafs in overtime on March 25 thanks to a schedule rejig following the Canadiens' COVID-19 issues.

"Our intensity level was rusty," Ottawa head coach D.J. Smith said. "You've got to get that compete level at 100."

Montreal has now won three straight for the first time since the end of January, and comfortably occupies the fourth and final playoff spot in the North Division, six points up on both the Calgary Flames and Vancouver Canucks with four games in hand.

The Canadiens, who were minus injured 18-goal man Tyler Toffoli for a third consecutive game, are also now just four points back of the Oilers for third in the standings -- again with four games in hand.

"A good cultured team always finds a way to win without a superstar," Danault said. "We all stick to the system, game after game, whoever's in or not.

"We've got to play harder," Senators winger Nick Paul said. "We came out with our legs moving. From there, we just kind of died off."

After coming close early when Nick Suzuki hit the post, Montreal opened the scoring at 10:48 of the first on a lucky break. Gallagher's initial shot pinballed off Ottawa centre Colin White and defenceman Thomas Chabot in front to Danault, who fired his third of the season into a wide-open net.

The line of Danault, Gallagher and Tatar combined for six points on the night, and has six goals and 10 assists over the last three games.

"We've built a lot of chemistry," Danault said. "We (complement) each other really well."

Ottawa got a power play that stretched from the end of the first into middle period, but the Canadiens doubled their lead 48 seconds after the break when Byron took a pass from Evans and backhanded his third -- and Montreal's league-leading eighth short-handed goal -- upstairs on Gustavsson.

The Senators had an excellent opportunity to get back within one, but Allen, who played for the first time since March 19 and had lost four of his last six appearance in overtime without much offensive support from teammates, made a desperation stick save on Brady Tkachuk.

Montreal winger Josh Anderson hit another post early in the third, but Perry roofed his seventh, and fourth in the last nine contests, to make it 3-0 at 4:43.

"I've played behind a few good teams in the past," said Allen, a 2019 Stanley Cup champion with St. Louis. "Tonight felt like I was behind one of those really good teams again."

Gallagher scored his 14th, and third in as many games, at 10:04 off a pass from Danault to make it 4-0 before Brown broke Allen's shutout bid with under two minutes to go on a power play with his eighth.

But that didn't matter much to a Canadiens team starting to find its groove.

"I've been through coaching changes," said Allen, whose club will play 17 times in April, including Saturday at home against Ottawa. "It takes a couple weeks, a month. Things are starting to click and everyone's buying in.

"If we can do that consistently, we'll have a good chance to win most nights."

Notes: White left the game with an upper-body injury in the second. ... Ottawa announced the team has signed defenceman Jacob Bernard-Docker, a first-round pick in 2018, and centre Shane Pinto, a second-round pick in 2019, to three-year entry-level contracts.

-- this report by The Canadian Press was first published April 1, 2021.