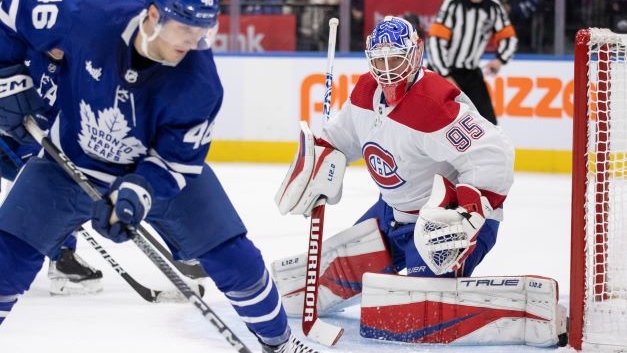 Matt Murray was perfect in making 16 saves over two periods of action in his Maple Leafs debut as short-handed Toronto defeated the Montreal Canadiens 3-0 in pre-season play Wednesday.

Denis Malgin, with a goal and an assist, Nick Robertson and Nick Abruzzese scored for the Leafs, who lost defencemen Jordie Benn and Carl Dahlstrom for precautionary reasons early, forcing forwards Calle Jarnkrok and Alexander Kerfoot into action on the blue line most of the night.

Canada's 1972 Summit Series team was honoured before the opening faceoff on the 50th anniversary of Paul Henderson's dramatic winner with 34 seconds left in Game 8 against the Soviet Union.

Erik Kallgren made 11 saves in the third period for Toronto after replacing Murray.

Sam Montembeault allowed one goal on 15 shots in 31 minutes of work for Montreal. Kevin Poulin made 12 saves the rest of the way for the Canadiens.

Jarnkrok, who signed with a four-year contract with the Leafs in free agency, scored twice in his Toronto debut Saturday, but was moved back to defence alongside Morgan Rielly after Benn and Dahlstrom exited.

Kerfoot, meanwhile, was paired with T.J. Brodie. Mark Giordano and Victor Mete represented the club's only blue-line duo where both players were their natural positions.

The Leafs started the night already minus injured captain John Tavares, out at least three weeks with an oblique strain suffered over the weekend, while the top line of Auston Matthews, Mitch Marner and Michael Bunting got the night off.

Juraj Slafkovsky, the No. 1 pick at July's NHL draft, got a muted first taste of the Original Six rivalry, but Montreal was minus captain Nick Suzuki (lower-body injury) and Josh Anderson (upper-body injury). Cole Caufield and Brendan Gallagher didn't make the trip.

Robertson -- a promising player Toronto would love to see move into a top-6 forward role this season -- put the Leafs ahead 1-0 six minutes into the first period when he moved down the left side with speed and snapped a shot through Montembeault's pads.

Acquired in a July trade with the Ottawa Senators as Toronto revamped its goaltending, Murray had a tidy first period, stopping all eight shots he faced, and also picked up the second assist on Robertson's opener.

A two-time Stanley Cup winner with the Pittsburgh Penguins, the Thunder Bay, Ont., native spent a mostly miserable two seasons in the nation's capital before getting another fresh start in Toronto.

Murray continued his solid play in the middle period before Malgin scored his second of the exhibition schedule with 45 seconds left before the intermission on a power play when he took a pass from Kerfoot -- skating as a forward on the man advantage -- and beat Poulin upstairs.

Murray's 16 saves matched the 16 stops Ilya Samsonov, Toronto's other summer goaltending addition, made in his 40 minutes of work Saturday.

Abruzzese rounded out the scoring on another power play with less than four minutes left in regulation.

Canada's single-use plastics ban starts this month with their manufacture and import: These are the products on the list

France to make condoms free for anyone under 25, Macron says

France will make condoms free in pharmacies for anyone up to age 25 in the new year, President Emmanuel Macron announced Friday.