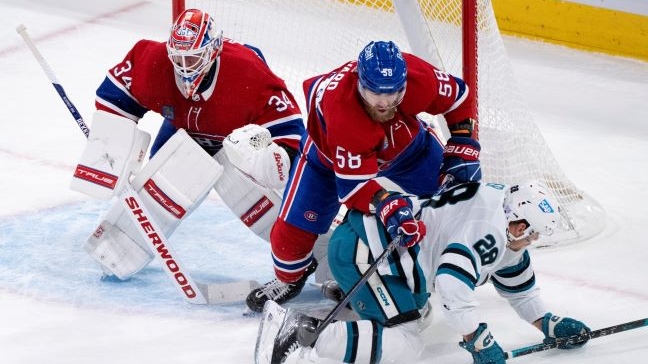 Kaapo Kahkonen recorded his first shutout for the San Jose Sharks stopping 28 shots to help lead his team to a 4-0 win over the Montreal Canadiens on Tuesday.

Tomas Hertl scored twice in the third period, including an empty-net marker, for San Jose (8-13-4). Matt Nieto and Logan Couture added the others.

The Canadiens hit a wall on the power play going 0 for 6 against San Jose’s league-leading penalty kill.

The Sharks drew first blood at 1:33 of the opening period when winger Alexander Barabanov attempted a wraparound and Nieto zoomed into the crease to tap the puck in off a rebound.

Habs coach Martin St. Louis challenged the play for offside but video review confirmed that Barabanov was onside in the lead-up and the goal stood.

With 1:51 to go in the first period, Brendan Gallagher made the Bell Centre crowd roar when he hit the crossbar from the left face-off circle.

In the second, Canadiens forward Christian Dvorak beat Kahkonen for the equalizer but the goal was called off. The referee indicated that Montreal winger Evgenii Dadonov took an interference penalty on the play when he checked defenceman Nick Cicek in San Jose’s net.

The Canadiens started the third period on a five-on-three power play due to a late delay of game call but the Sharks successfully killed the penalty and responded with three goals.

Hertl redirected a Kevin Labanc pass into the back of the net at 2:29 of the third.

Just over a minute later, defenceman Matt Benning located Couture with a stretch pass and the Sharks captain found himself on a breakaway and beat Allen to give his side a 3-0 advantage.

Hertl iced the game at 17:46 of the frame by skating the puck into an empty net.

Kahkonen has had a rough time at the office lately, allowing four goals or more goals in four of his last five games. Filling in for injured starter James Reimer, Kahkonen stopped all 28 shots sent his way to earn his first shutout since March 16, 2021.

Sharks defenceman Marc-Edouard Vlasic played his 20th career game against his hometown Canadiens. With an assist in Tuesday’s win, the Montreal native picked up seven points (one goal, six assists) against the Habs.

The Canadiens will set sail for a four-game Western Conference road trip starting with a visit to the Calgary Flames on Thursday.

The Sharks will head to Toronto to take on the Maple Leafs on Wednesday.

This report by The Canadian Press was first published Nov. 29, 2022.

Police have released a video of a driver who smashed a vehicle through the doors of Vaughan, Ont. mall early Wednesday before allegedly breaking into an electronics store.

The federal government is expected to introduce a law as early as Thursday to delay the extension of medically assisted dying eligibility to people whose sole underlying condition is a mental disorder.